Get detailed COVID-19 impact analysis on the Germany Ivd Market

The Germany IVD Market accounted for $3,727 million in 2016, and is estimated to reach at $5,453 million by 2023, growing at a CAGR of 5.5% from 2017 to 2023. In vitro diagnostics (IVD) plays a vital role in early diagnosis and treatment management. The IVD devices are used for the detection of various diseases such as infections, cardiovascular, cancer, and gastrointestinal diseases. In addition, they support for developing and designing personalized medicine.

Increase in prevalence of chronic and infectious diseases and rise in geriatric population in Germany primarily drives the Germany IVD market. In addition, growth in trend toward personalized medicine and technological advancement such as metabolic and protein analysis in the IVD devices have increased the IVD market growth. Furthermore, advert of point of care diagnosis is anticipated to boost the market growth. However, lack of favorable reimbursement policies and stringent government regulations associated to the product approval, manufacturing, and sale of IVD are expected to hamper the market growth. Ongoing R&D activities related to IVD are anticipated to present new opportunities for the market. 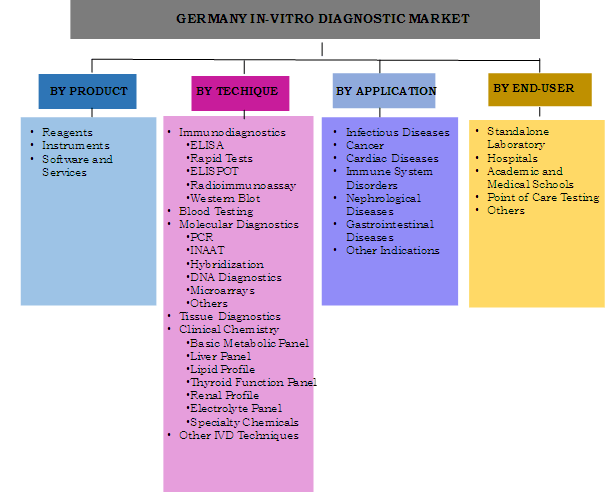 According to WHO, in 2014 the cancer deaths accounted for approximately 125,500 male deaths and 104,300 female deaths. According to the Federal Statistical Office Wiesbaden, Cardiovascular diseases was the leading cause of death in Germany accounting for approximately 356,616 deaths, followed by cancer that accounted for 226,337 deaths, in 2015.This increase in rate of diseases have increased the demand for IVD market.

Germany geriatric population has increased significantly. They are highly susceptible to various infectious diseases. According to the Federal Statistical Office Germany, the number of people in Germany aged 65 and above increased by approximately 5.2 million in 1990 to 17.1 million in 2014, that is equal to 43% rise. Furthermore, they also stated that out of the total population of Germany, 81.2 million in 2014, of whom 22.2 million were aged 60 and over. This escalation in rate of the geriatric population is expected to raise the demand for diagnosis, thereby driving the IVD market.

The clinical diagnostics have become essential part of healthcare, as the technologies advance. Earlier, molecular testing was performed only by a skilled professional in laboratories and hospitals but the automated technology has enabled testing not only in hospitals but also at home. For instance, in March 2016, F. Hoffmann-La Roche Ltd received approval for CINtec PLUS Cytology test by China Food and Drug Administration (CFDA). CINtec Plus Cytology test provides improved diagnostic and early intervention of pre-cancerous cervical diseases.
Major companies operating in this market adopted product launch as their key development strategy. Companies profiled in this market include, ThermoFisher Scientific Inc., Alere Inc., Biomerieux, Danaher Corporation, F. Hoffmann-La Roche AG, Becton Dickinson and Company, Bio-Rad Laboratories, Bayer AG, Sysmex Corporation, and Johnson & Johnson among others.

In vitro diagnostics (IVD) are diagnostic tools used to analyze body specimens and body fluids such as blood, urine, stool, tissues, and others to support clinical diagnosis and treatment. Different IVD tools are used for diagnosis such as reagent, calibrator, control material, kit, specimen receptacle, software, instrument, apparatus, equipment, or system. The reagents accounted for the highest market share in 2016 and is expected to dominate the market during the forecast period owing to accessibility of wide range of reagents that are cost efficient, reliable, and effective for fast diagnosis of diseases and disorders.

Immunodiagnostics accounted for the highest share owing to increase in demand for personalized medicine and rise in prevalence of chronic and infectious diseases. In addition, increase in awareness and ease of use of self-monitoring techniques boost the market growth. Blood testing accounted for the highest market potential owing to rise in applications of molecular target drugs or therapies, MDx in genetic testing & cancer screening, and growth in awareness of home kit tests. Furthermore, the increase in government expenditure in healthcare sector is anticipated to increase the market growth. According to the WHO, the Germany government healthcare expenditure has increased from 19.25% in 2013 to 19.65% in 2014.