Get detailed COVID-19 impact analysis on the Lamea Ivd Market

The LAMEA IVD Market accounted for $7,413 million in 2016, and is estimated to reach $10,316 million by 2023, growing at a CAGR of 4.7% from 2017 to 2023. In vitro diagnostics (IVD) are the medical diagnostic devices and reagents used to examine the body specimens for detection of diseases, infections, and chronic conditions and identify appropriate treatments.

Technological advancements in the field of personalized medicine and companion diagnostics drive the LAMEA IVD market. In addition, increase in prevalence of chronic diseases, infectious diseases, and lifestyle-related conditions such as diabetes, hypertension, and others, and rise in geriatric population fuel the growth of the IVD market. Furthermore, growth in investment in healthcare sector by government and private companies is anticipated to boost the market growth. However, unfavorable reimbursement policies and stringent government regulations associated with manufacturing and sale of IVD are expected to hamper the market. Ongoing R&D activities related to IVD are anticipated to present new opportunities for the market. Moreover, the LAMEA region offers lucrative growth opportunities to the IVD market players owing to the increase in awareness of preventive healthcare measures and decentralized universal healthcare access. 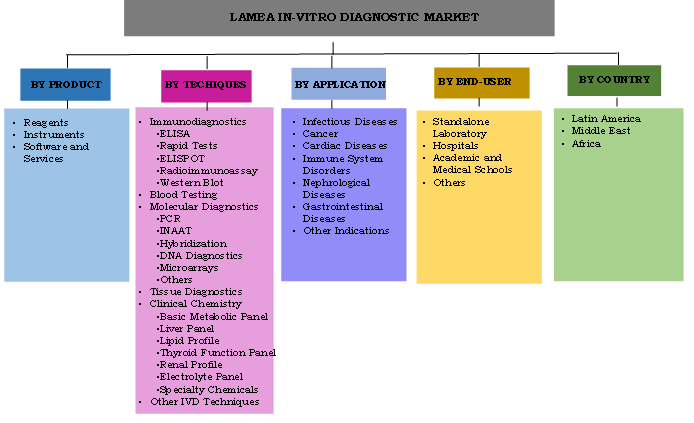 Country wise, it is analyzed across Latin America, Middle East, and Africa. Latin America accounted for the highest share of the market in 2016. Africa is anticipated to witness the highest growth rate during the forecast period. In addition, this region is expected to emerge as the area with maximum growth potential due to the focus of key players in the emerging economies. 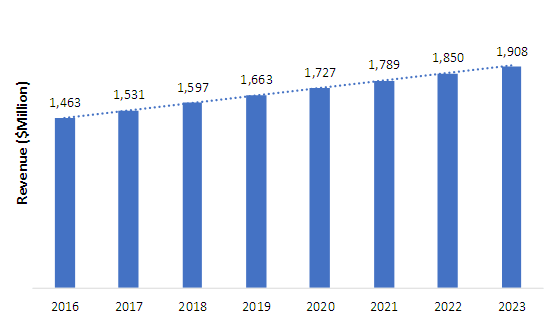 According to WHO, globally people living with HIV accounted for approximately 36.7 million in 2016, of which the highest number of people living with HIV is reported in Africa with approximately 25.6 million. According to WHO estimates, tuberculosis accounted for 450,000 cases in 2013, in the South African countries. Furthermore, it also stated that out of these 450,000 cases, approximately 270,000 (60%) people have both HIV and TB. The increase in these diseases is expected to increase the demand of the diagnostic devices, which in turn drives the IVD market.

Technology plays a vital role in the advancement of healthcare sector. Earlier, molecular testing was performed only by a skilled professional in laboratories and hospitals, however, the automated technology enables testing not only in hospitals but also at home. For instance, in 2017 BioSURE introduced first self-test HIV kit known as, BioSURE HIV Self-Test in South Africa. This overcomes the challenge of HIV diagnosis in South Africa, as the people did not have access to test facility or did not incline to test themselves. The escalation in rate of the technological advancement and increase in preventive awareness is expected to raise the demand for diagnosis, thereby driving the IVD market.

Increase in Government Expenditures on Healthcare

The need of cost reduction and continuous quality improvement in healthcare sector creates opportunity for investment. Hence, the governments of all the regions have increased their healthcare expenditures for reducing the disease rate in the countries. According to the WHO, the total healthcare expenditure for Nigerian government has increased from 6.48% in 2013 to 8.17% in 2014. The increase in LAMEA economic conditions are expected to increase government funding in healthcare sector, which in turn contributes to the growth of the IVD market.

In vitro diagnostics (IVD) are diagnostic tests that monitor the concentration of blood, urine, stool, tissues, and body fluids of human body and provide information to assist the diagnosis and treatment of diseases and disorders. These tests are generally performed in standalone laboratory, hospitals, academic and medical schools, point-of-care testing, and others. The standalone laboratories accounted for the highest market share in 2016 and is expected to dominate the market during the forecast period owing to the increase in the outsourcing of tests and availability of high-tech & well-equipped machines for the fast & accurate test results.

Latin America accounted for the highest share owing to improving healthcare infrastructure due to increase in government expenditure in healthcare sector. According to the WHO, the Mexico government healthcare expenditure has increased from 11.36% in 2011 to 11.58% in 2014. Africa accounted for the highest market potential because of rise in prevalence of communicable and non-communicable diseases such as tuberculosis, HIV, cancer, and others. In addition, private companies and government initiatives for the improvement of healthcare sector are expected to gain high growth opportunities in the market.