Automotive refinish coatings market is expected to garner $11.3 billion by 2021, registering a CAGR of 6.3% during the forecast period 2015-2021. Automotive vehicles need to be repaired frequently to enhance the façade and to recover the damages caused by external factors such as extreme temperature, stones, damage due to accidents and similar others.

Automotive refinish coatings are used by the automotive body shops and repair centers for refinishing the vehicles. The global automotive refinish coatings market had witnessed a tremendous growth during the last 5 years. This was mainly due to increase in the number of vehicle collisions in conjunction with proclivity of owners to repair their vehicles. However, increasing government regulations on the utilization of high volatile organic compounds (VOC) level coatings may hamper the solvent-borne market growth. Therefore, the market is inclined towards water-borne refinish coatings, as they have comparatively low VOC levels.

Increasing number of accidents, adoption of newer technologies and rising disposable income in the developing economies are the major factors that are expected to boost the automotive refinish coatings market growth. Moreover, growing demand of recreational vehicles in the developed regions of North America and Europe is further expected to fuel the refinish coatings market.

Geographically, global automotive refinish coatings market is segmented into North America, Europe, Asia-Pacific and LAMEA regions. Asia-Pacific region is the largest consumer of refinish coatings and accounts for more than 35% of the global consumption. This is mainly due to increasing sales of pre-owned vehicles, growing cab services, and increasing vehicle repair and body shops in the region. To provide a thorough understanding of the market scenario, the global automotive refinish coatings market is further segmented based on product type, technology and resin consumed in different refinish coatings. The report highlights some of the major products such as primer, basecoat, clearcoats, Filler & Putty and activators among others. On the basis of technology, the automotive refinish coatings market is segmented into solvent-borne, water-borne and UV-cured coatings. The consumption of solvent-borne coatings is highest owing to stringent government regulation on high VOC levels. Water-borne coatings are expected to be used more than solvent-borne coatings during the forecast period. Based on the type of resins consumed in the coatings, the market is classified into polyurethane, acrylic, alkyd, and others.

The market for automotive refinish coatings witnessed a significant growth due to various strategies adopted by the key market players. Acquisition and expansion are among the noteworthy strategies adopted by the companies. For instance, Axalta Coating System, commissioned a new manufacturing unit at Wuppertal, Germany to produce eco-friendly waterborne coatings. With this expansion, the company plans to address the growing demand for coatings in the Europe, Africa and Middle East markets owing to the centralized location of Wuppertal. 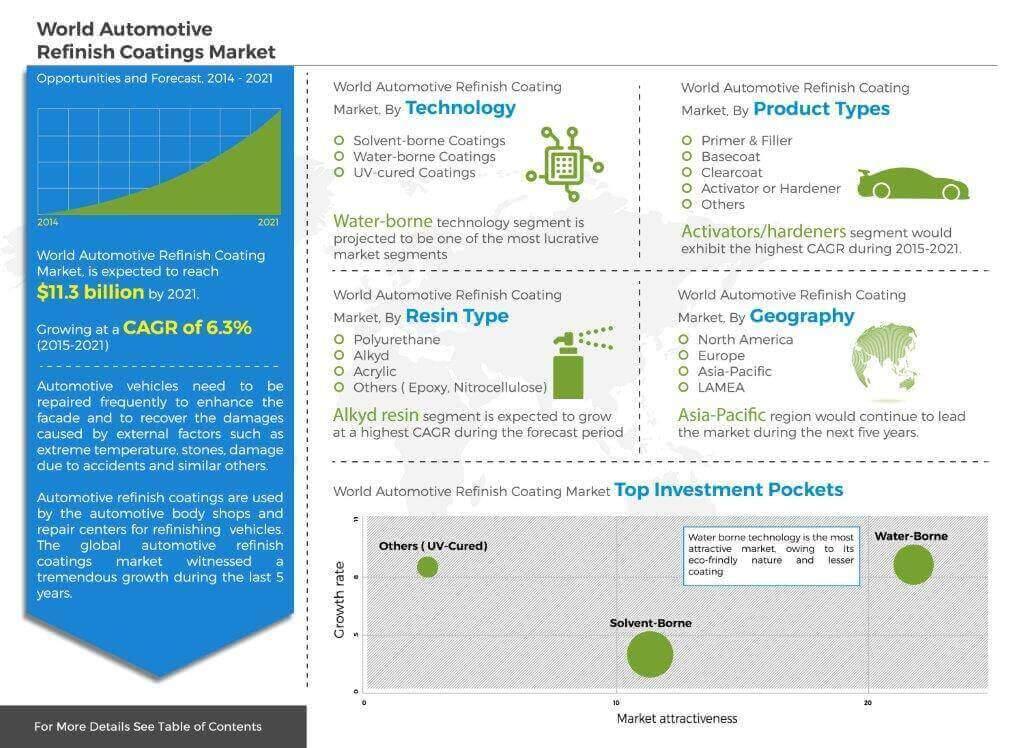