Get detailed COVID-19 impact analysis on the Ablation Devices Market

Ablation therapies can be used for the treatment of various diseases across several medical domains such as ophthalmology, cancer, gynecology, and cardiovascular. Being a minimally invasive procedure, it is less painful than conventional surgical operations, leading to shorter recovery time. In addition, it causes very little damage to the surrounding tissues. Even though it lowers the side effects, it has some disadvantages as well. For instance, large and bulky tissues, such as bone and neck nodules, cannot be treated with ablation. Besides, the availability of ablation treatment in remote locations is quite restricted.

Sudden cardiac arrest is the leading cause of death in U.S., responsible for about 300,000 deaths per year. As per a research by St. Jude Medical, Inc., in 2015, there were about 250,000 catheter ablations performed in U.S. alone, whereas the global estimate was about 990,000. Electrophysiology employs catheter ablation to destroy abnormal heart tissues that cause irregular heart rhythms or cardiac arrhythmia. Radiofrequency and cryoablation are the most widely used ablation catheters and are expected to proliferate in the future. In addition, the number of ablation procedures performed for the treatment of atrial fibrillation are expected to increase substantially in the future.

Cancer is one of the leading causes of morbidity and mortality in the world. In the year 2012, there were approximately 14 million new cases and 8.2 million cancer-related deaths. According to the WHO, the number of new cases are expected to increase by 70% within the next two decades. Thus, there is an imminent need for more advanced and innovative technologies to treat cancer. Ablation is a technique that uses heat to destroy cancer cells by reducing its size and relieving symptoms. It can be used on its own or in combination with surgery, chemotherapy, or radiotherapy. The demand for ablation devices have increased in the recent years, as this treatment is very specific for destroying only tumor tissues.

MAJOR TYPES OF CANCERS WORLDWIDE IN 2012 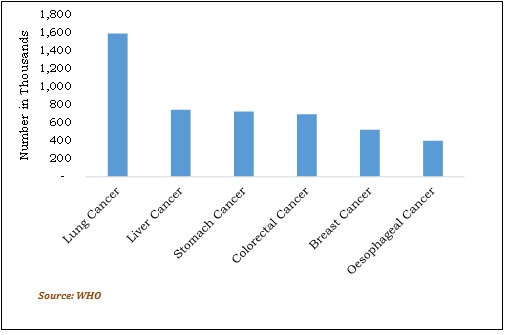 This can be attributed to the innovation in technologically advanced ablation devices. Moreover, common occurrence of chronic diseases, such as cancer and atrial fibrillation, and the rise in awareness about the benefits of ablation techniques are anticipated to contribute towards the market growth. 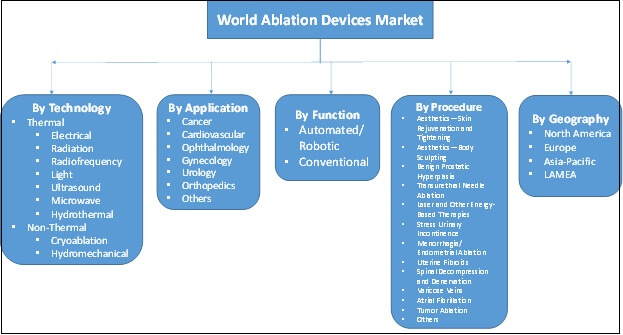 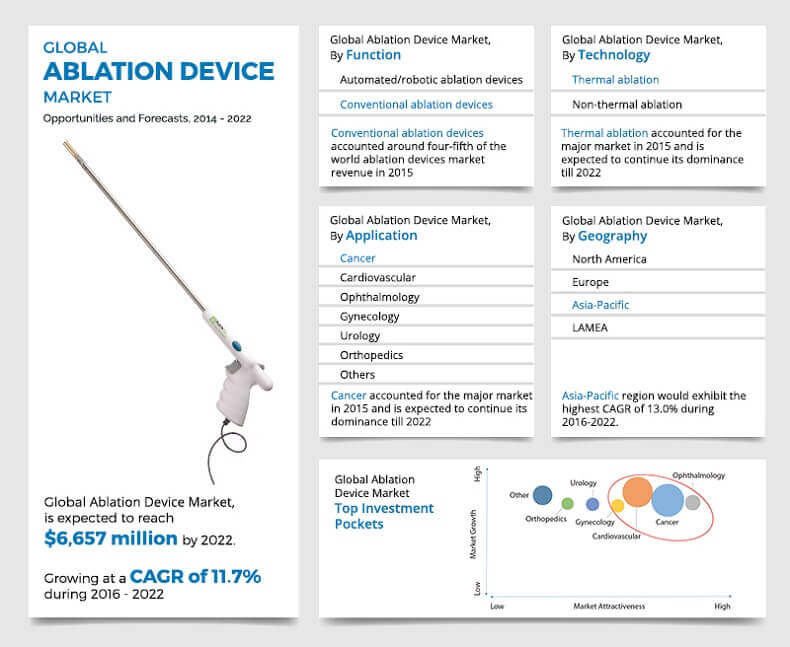 The ablation devices market is growing at the steady pace due to the growth in incidence of cardiac diseases such as atrial fibrillation (AF), atrial flutter, and cardiac arrhythmias. Hence, different mid-to-large sized companies have augmented research and development (R&D) investments in this market. Moreover, even smaller companies have shifted their focus and increased their R&D activities, which has led to a surge in product developments (approvals & launches), and in turn contributing to the growth of ablation devices industry. For instance, Medtronic launched the new Barrx 360 Express radiofrequency ablation balloon catheter in April 2016, which is a self-adjusting circumferential RFA catheter to remove diseased tissues. This catheter is anticipated to aid the treatment of Barretts esophagus.

Acquisition is another key strategy that has been adopted by key companies. Due to the presence of numerous small-sized to mid-sized companies, the larger companies acquire smaller and emergent companies to curb the competition and increase their revenue. For instance, Galil Medical, a manufacturer of cryoablation systems and needles, was acquired by BTG plc on 6th May 2016 to expand BTGs product portfolio and market share. 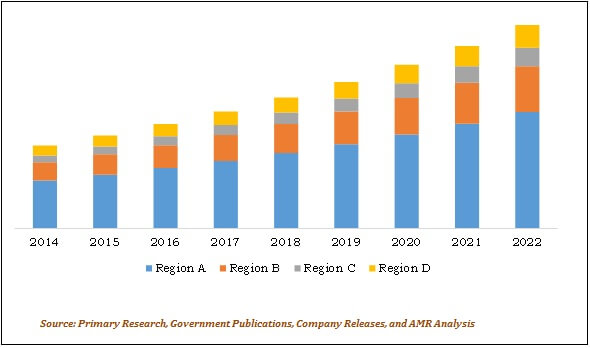 The untapped markets, such as Asia-Pacific, Africa, and Latin America, are anticipated to emerge as a lucrative market, owing to the presence of promising ablation devices, growth in demand of minimally invasive treatments, and rise in disposable incomes. Moreover, a large undiagnosed patient population, rapid urbanization which leads to increasing cases of chronic diseases, growing awareness about prostate cancer, and improved government funding towards healthcare are expected to contribute towards the market growth in these regions. 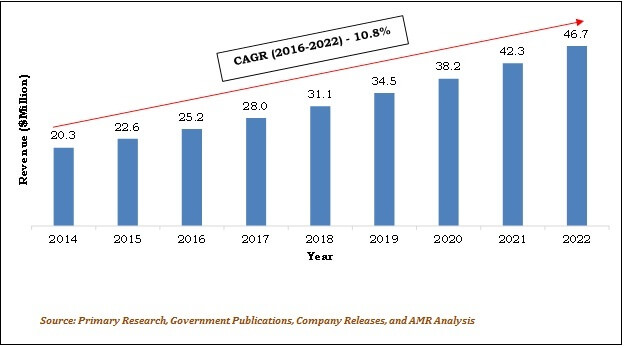 Turkey ablation devices market is projected to grow at a high CAGR of 10.8% during the forecast period. However, lack of awareness and issues pertaining to price constraints could restrain the market growth. However, the presence of untapped ablation devices market would boost the growth of the market. Furthermore, the increase in focus of the key players on the emerging markets (such as Asia-Pacific and LAMEA nations) is primarily set to contribute towards the growth of the market.

The world ablation devices market segmentation is explained below.