The impact of the COVID-19 pandemic has resulted in supply-chain disruptions causing order cancellation of new aircrafts. Moreover, few aircraft manufacturers faced halts in production of aircrafts. For instance, in 2020, Rafale fighter jets production was temporary suspended in France due to coronavirus outbreak. The impact of the COVID-19 pandemic resulted in delayed development of airborne fire control radars, restrictions in operation of key players, cancellation of contracts, and shortage of components. Shortage of components, subsystems, and electronic systems, owing to regulations associated with import and export of goods have also resulted in delayed manufacturing. Revenue crunch and increased maintenance costs were some of the major factors affecting manufacturers during the pandemic. 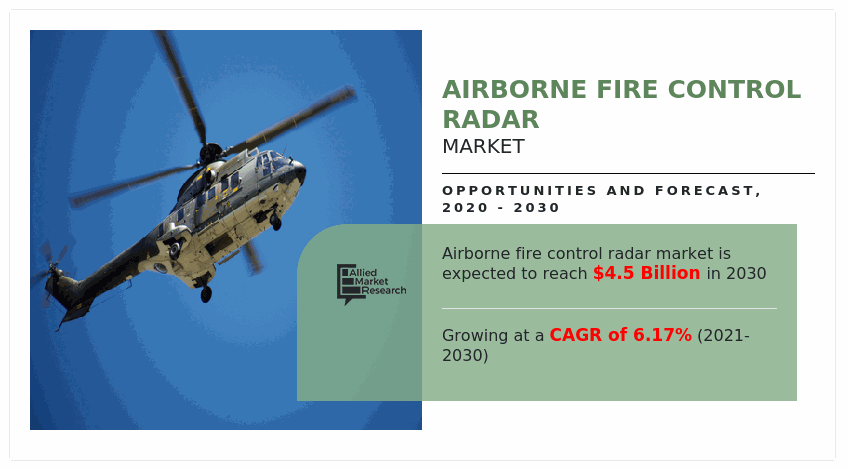 A fire control radar is a radar that identifies the coordinates of a target and provides data, which is utilized to determine target trajectory and its continuous position. Airborne fire control radar detects the target, estimates the target range, range rate, azimuth angle & elevation angle for long detection ranges, high mission reliability, and multi-target tracking capabilities. These radars are developed for air-to-air, air to sea, and air to sea missions.

The growth of global airborne fire control radar market is driven by growth in usage of active electronically scanning array (AESA) technology, rise in accession of fighter jets to improve aerial strength, and surge in military expenditure in numerous countries. However, high maintenance cost is the factor that restrains the growth of the market. Furthermore, technological advancements and upsurge in demand from emerging economies to address territorial conflicts are the factors expected to offer growth opportunities during the forecast period.

Ku/K/Ka-Band is projected as the most lucrative segment

The airborne fire control radar market is segmented on the basis of frequency band, platform, application, and region. Based on frequency band, it is classified into X-band, L and S-band, and Ku/K/Ka-band. By platform, it is segmented into combat helicopters, fighter jets, and others. On the basis of application, the market is divided into air to sea, air to ground, and air to air. By region, the report is analyzed across North America, Europe, Asia-Pacific, and LAMEA.

Traditional radar with rotating antennas operating on fixed frequency were usually able to perform only one function and required separate units for other function such as surveillance and targeting. However, Active Electronically scanning array (AESA) technology based radars are capable of carrying out several functions simultaneously. In addition, AESA radar can produce radar pulses on different frequencies with interleaved pulse streams carrying out several functions simultaneously. This surge in usage of active electronically scanning array technology in radars is expected to drive the growth of market.

Rise in Accession of Fighter Jets to Improve Aerial Strength

Several countries continuously seek to upgrade their air force fleet and related equipment. However, in recent years, several countries are purchasing new aircrafts, equipped with latest technology to strengthen their air force. For instance, in July 2020, in India, Defense ministry approved a defense deal for procurements of MiG-29 jets for Indian Air Force and upgradation of 59 existing MiG-29 jets in IAF inventory from Russia. This rise in accession of fighter jets by numerous countries to improve aerial strength in their region is anticipated to drive the growth of the airborne fire control radar market.

An increased focus on adoption of active electronically scanned array (AESA) technology in radar systems in aircrafts has been witnessed. This is due to the reason that AESA based radar transmits radio waves at different frequencies in multiple directions to offer longer range, detection of smaller targets, and resistance to jamming. It also provides numerous functions to be performed simultaneously unlike the traditional radar systems, which perform only one function & require separate units to perform other several functions such as surveillance and tracking.

Rise in demand for airborne fire control radar from emerging economies, such as Asia-Pacific, coupled with increased procurement of fifth generation fighter jets in China, and growth in demand for combat helicopters & UAV from emerging economies such as India & China are expected to supplement the market growth. Collaborations and acquisitions are projected to enable the leading players to enhance their product portfolios and expand into different regions.

Q1. What is the estimated industry size of Airborne Fire Control Radar?

A. The global airborne fire control radar market is expected to reach $4,455.1 million in 2030

Q2. What are the upcoming trends of Airborne Fire Control Radar Market in the world?

A. The upcoming trends in airborne fire control radar industry include growth in usage of active electronically scanning array (AESA) technology, and modernization of fighter jets

Q3. Which are the top companies to hold the market share in Airborne Fire Control Radar?

A. The adoption of airborne fire control radar market is expected to increase during the forecast period owing to greater usage of active electronically scanning array (AESA) technology, rise in accession of fighter jets to improve aerial strength, and urge in military expenditure in numerous countries.

Q5. Q5. What is the use of airborne fire control radar in aircraft?