Airport traffic and income have been significantly and immediately impacted by COVID-19. Global passenger travel decreased as a result of the COVID-19 pandemic. The problem first appeared in Asia-Pacific, however according to ACI, the rapid spread of the virus and the containment measures put in place as a result, such as government advice to stay home and airport closures, led to a 22.9% decline in global air traffic in February and a 53.1% decline in March 2020. This amounted to a drop in passenger volume of 620 million in the first quarter of 2020. Owing to a 90% global reduction in passenger travel, April was an especially challenging month. The grounding of aircraft has resulted in steep decline of aircraft gearbox. 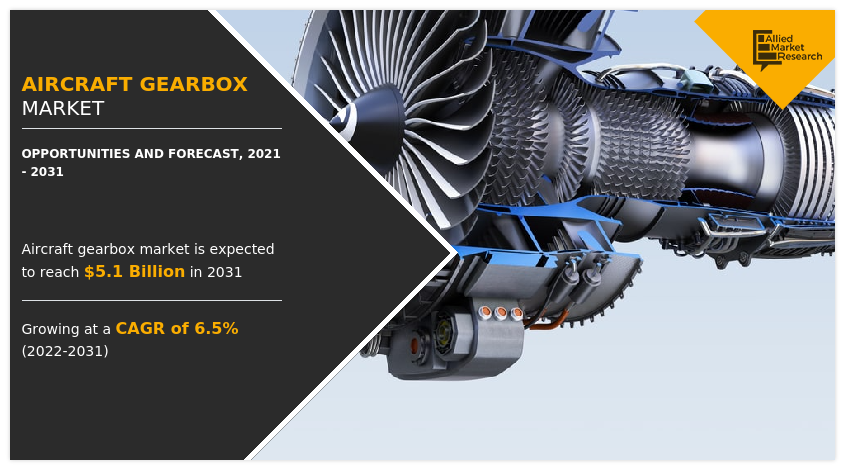 Transmission is another name for a gear box. A collection of gears and their case, most frequently seen in vehicles, are simply referred to as "gear boxes." Transmissions enable machinery to run effectively and even help slow down and shut down machinery because most motor vehicle engines have high operating and idle speeds. Automobiles, turbines, and large machines all employ gearboxes to transmit energy from one spinning power source to another. An aircraft gearbox refers to a transmission in an aircraft, curtaining to the entire system that transfers power between two places, such the MGB and the tail rotor. Typically employed to change rotational speed, gearboxes are a part of the transmission system

Airframe is projected as the most lucrative segment

The growth of aircraft gearbox market is driven by factors such as extensive research and development efforts taken by global players to improve operational efficiency of an Aircraft Gearbox and reduce overall carbon footprint, increase in passenger traffic across the globe catering to a positive surge in aviation industry, rise in infrastructure investment, and efforts by regional government to develop indigenous manufacturing capacities. Moreover, the aircraft gearbox market is directly proportional to the rise in demand of aircrafts across the globe. Boeing predicted in its 2021 Commercial Market Outlook (CMO) that there would be a demand for approximately 43,000 aircraft over the next 20 years, up 500 from its prediction for 2020, with a market worth of over $7.2 trillion. The manufacturing and supply chain industry will also play a major role in defining the market consolidation of Aircraft Gearbox. With respect to current Russia Ukraine war, major Aircraft Gearbox manufacturers such as Boeing, General Electric, Rolls Royce, and CFM international are withdrawing from the Russian market. These players are actively looking for new raw material suppliers from Africa, Asia-Pacific or North America regions in effort to reduce their depends from Europe.

The global aircraft gearbox market is segmented on the basis of application, component, end use and sales channel. By application, it is categorized into engine and airframe. The engine segment is further sub divided into piston and turboprop engine, turbojet engine, turboshaft engine, and turbofan engine. Depending upon component, the market is fragmented into gear, housing, bearing, and other. By end use, it is divided into commercial aircraft, military aircraft and helicopters. The commercial aircraft segment is further segmented into narrow body, wide body, regional & business jet, and freighter. The military aircraft segment is sub-divided into combat aircraft, special mission aircraft, tanker and transport, and training aircraft. The sales channel segment is bifurcated into original equipment manufacturer (OEM) and aftermarket. Region-wise, the market is analyzed across North America, Europe, Asia-Pacific, and LAMEA.

Bearing is projected as the most lucrative segment

Companies have adopted product development and product launch as their key development strategies in the aircraft gearbox industry. Moreover, collaborations and acquisitions are expected to enable leading players to enhance their product portfolios and expand into different regions. The key players that operate in the aircraft gearbox market are General Electric, Boeing, Safran, Rolls Royce, Triumph Group, Regal Rexnord, and PBS Group.

Aircraft Gearbox Market By End Use

Military Aircraft is projected as the most lucrative segment

An airplane's fuel economy is measured by how far it can fly on a single gallon of fuel and by how little carbon dioxide it emits. The number of seats on airplanes is anticipated to increase by around 5% every year. By 2032, there should be roughly 40,000 aircraft in the world's fleet, an increase of 20,930 aircraft. Up to 2025, the fuel consumption for aviation is anticipated to grow by around 2.3% yearly. Aircraft manufacturers and airlines are collaborating closely to increase fuel economy by adopting innovative technologies, designs, and materials, upgrading engines, optimizing aerodynamics, and using lighter materials. This will cut emissions and fuel consumption. Companies operation within the aircraft gearbox market such as Pratt & Whitney and NASA among others are having notable investment in research and development to improve operational efficiency of an Aircraft Gearbox. The "double-bubble" D8 design experiment, which involves shifting the engines from beneath the wings to the top of the plane towards the tail, includes Pratt & Whitney. This would significantly increase fuel economy while reducing drag and noise.

Aftermarket is projected as the most lucrative segment

Rise in air traffic bolstering the requirement of new aircrafts.

The rise in aviation traffic is attributed to a variety of factors. The primary reason is population and economic expansion, which is being fueled by the increase in middle class population. By 2035, the global economy is projected to increase by 3% annually, while aviation traffic is projected to grow by an average of 6% annually. The second development element is introducing low-cost airlines with competitive rates on well-travelled routes. They play a significant role in the intensification of air traffic in Europe; at present, they account for more than 40% of Europe's and 25% of traffic globally. By encouraging international airlines to lower ticket rates, these businesses significantly influence airline prices.

The sudden outbreak of COVID-19 in 2019, imposition of global trade and travel restriction in 2020 and 2021, followed by the Ukraine-Russia war in 2022 has posed a notable amount of challenges in business operations, majorly in cross border trade. Governments across the globe have limited their trade dependencies on European regions and aligning their inclination toward Asia-Pacific, African and Middle East nation. The inter-European trade infrastructure is also undergoing a major shift, causing notable business losses.

Airbus pleaded with European decision-makers not to put restrictions on Russian titanium imports. Sanctions on the metal, according to Airbus, would harm European aircraft while scarcely affecting the Russian economy. Comparatively, just one-third of Boeing's titanium demands are met by sources other than Russia for Airbus. Boeing said that it has stopped buying Russian titanium at the beginning of March. Despite this obstacle, Airbus recently reiterated its 2022 guidance and declared that its titanium sourcing requirements are met in the short and medium term.

According to the insights of CXOs, the aircraft gearbox market is expected to undergo a major shift in the coming years. Optimizing supply chain, streamlining manufacturing processes, increasing pace of deliveries and reducing backlog orders are some of the pressing concerns of the aircraft gearbox market which will be addressed by global leaders over the coming years.

The market is experiencing growth due to leading market participants investing in the development of lightweight gearboxes that can be used in military aircraft to meet the rise in demand for aircraft gearboxes in the defence sector. The enormous upfront cost and engine restrictions at high altitudes are still some of the difficulties that need to be solved, though. In addition, the aviation sector has been severely impacted by the increased awareness of ecologically friendly cars. This popularity will have an impact on the development of aircraft gearboxes and motivate industry participants to launch distinctive, environment-friendly gearboxes in the years to come.

The COVID-19 epidemic had a significant impact on the business even though the demand for aircraft gearboxes was steadily increasing. Even the largest aircraft gearbox manufacturers ran into operating problems owing to supply chain disruptions and restricted site access. Numerous governments imposed a countrywide lockdown, forcing businesses to shut down their factories. Defense firms were immediately impacted by the extended state of lockdown in some nations, which forced them to put off ordering aircraft gearboxes from their suppliers. In addition, the demand for aircraft gearboxes was affected by the entire cancellation of all international and local flights to stop the spread of the virus. This decreased the growth of the market participants due to increase in the cost of storing aircraft gearbox inventory.

Among the analyzed regions, Asia-Pacific is the highest revenue contributor, followed by North America, Europe, and LAMEA. Asia-Pacific is expected to witness highest growth rate during the forecast period, owing to increase in efforts of the Indian and Chinese governments to develop indigenous aircraft gearbox infrastructure.

Q1. What are the upcoming trends of aircraft gearbox market in the world?

A. The introduction of complex gearbox design and integration of additive manufacturing to limit experimentation and manufacturing cost are some of the major trends within the aircraft gearbox industry.

Q2. What is the leading application of aircraft gearbox market?

A. Majorly aircraft gearbox are used in engines and airframes.

Q3. Which is the largest regional market for aircraft gearbox?

A. Asia-Pacific is the largest regional market.

Q4. What is the estimated industry size of aircraft gearbox?

Q5. Which are the top companies to hold the market share in aircraft gearbox?