The primary function of baggage handling system at airports is to transport baggage and to ensure that a bag gets to the correct location at the airport. In addition, it serves other functions such as load balancing, bag tracking, volume regulation, detection of bag jams, and automatic tag reader (ATR), tilt tray sorters, vertical sortation unit, and others. 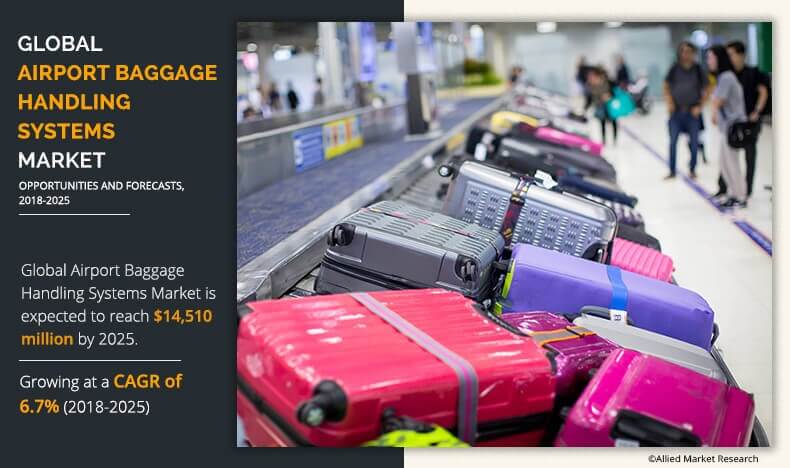 The global airport baggage handling system market is driven by anticipated growth in the air travel. In addition, modernization of new airports and technological advancements fuel the market growth. However, high upfront and maintenance cost of baggage handling system (BHS) and high consequences of system failure impede the growth of the market. Furthermore, utilization of robotization in the airports is expected to present lucrative growth opportunities for the market in the coming years.

The global airport baggage handling system market is segmented based on airport class, service, type, and technology. Airport class segment covered in this study includes Class A, Class B, and Class C. Based on service, the market is bifurcated into self-service and assisted service. Based on type, the market is classified into conveyors, destination coded, and vehicles. By technology, it is categorized into barcode and RFID. By region, the market is analyzed across North America, Europe, Asia-Pacific, and LAMEA. 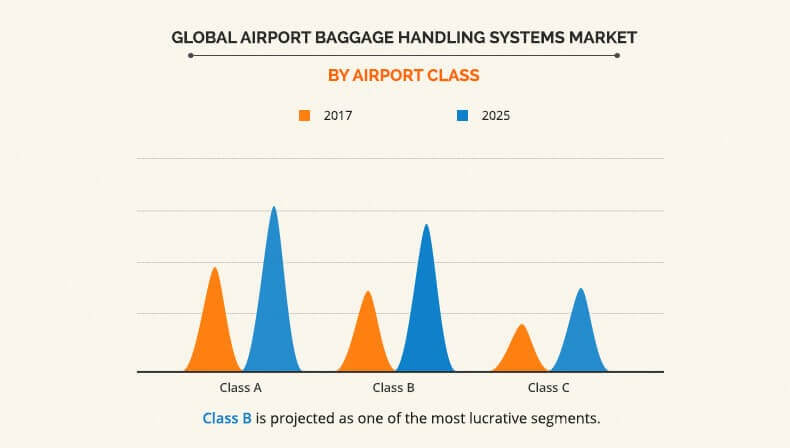 In the recent years, there is an increase in the number of passengers travelling via airways. For instance, according to data provided by The World Bank Group, the total scheduled traffic carried by all air carriers worldwide for both international and domestic increased from 2.9 billion in 2012 to 3.4 billion in 2017 growing at a CAGR of 7%. Also, the international air traffic is expected to roughly double from 2016 to 2035. Airports and airlines invest heavily in baggage handling technology with the increase in number of air passengers. This also helps cater passenger experience and airport operations, which in turn drive the growth of the global airport handling system market.

The continuous rise in number of airport terminals and renovation of the existing airport infrastructure drive the airport baggage handling system market. The primary reason for such renovation or modernization is due to the technologies used that are gradually becoming obsolete. The rise in the frequency of passengers also boosts the renovation and modernization. In addition, the modernization of airports help meet present and future requirements of the passengers. For instance, in March 2018, the Chicago City Council's Aviation Committee raised $8.7 billion investment for the expansion of the Chicago’s O’Hare international airport. Moreover, airline operators are adding on to new destinations, which in turn boosts the baggage handling systems. In addition to the existing operators, the demand for additional baggage handling system is expected to increase. For instance, in 2017, Zoom Air was launched in India with its operations that started from February 2017 with its routes limited within Indian cities. 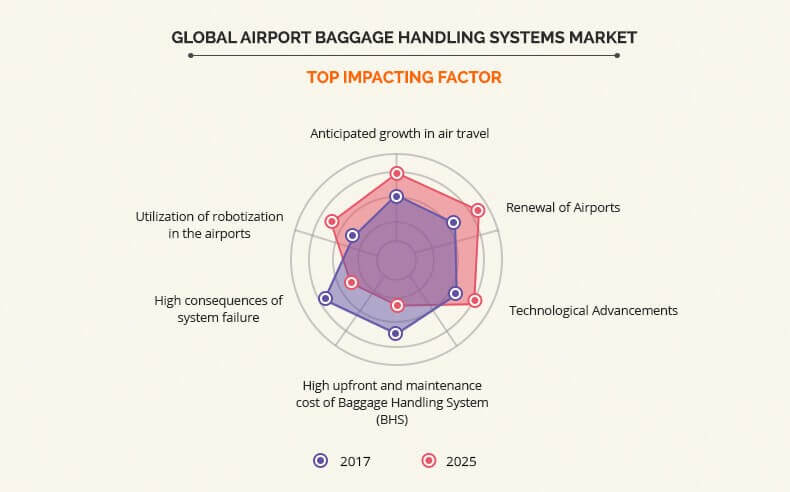 Similar to the other sectors, the aviation sector needs to be technologically updated to utilize maximum potential. The check-in process during peak travelling times generally consumes most of the time and is exhausting for the passengers. This process can be made convenient using automated kiosk, remote queue management system, and remote check-ins. Similarly, other technologies used in the baggage handling systems such as radio-frequency identification (RFID) and near field communication (NFC) are successfully implemented in numerous airports for automated check-in services. For instance, it was announced in June 2018 that an Italian company developed a new tagging technology incorporated with RFID chips for tracking passenger’s luggage in real time at every stage of transfer, which is expected to decrease the amount of lost or delayed baggage that costs airlines billions of dollars every year. Using this technology, scanners on conveyor belts can scan the RFID tags attached to the baggage and reroute if they have been misplaced or moving in a wrong direction. This would prove to be a pivotal technology in the baggage handling system over the barcode hand scanning technology. Hence, incorporation of RFID technology in the baggage handling system is expected to boost the growth of this market.

High initial investment, due to the usage of conveyor belts, RFID sensors, X-ray screening machine, and others, and inflated cost of a baggage handling system hamper the market growth. In addition, the operational and maintenance services of the BHS add on to the basic cost of the system, which include cost of maintenance, staffing, and electricity.

Utilization of robotization in the airports

In coming years, the baggage handling robots are expected to help in the process of loading passenger baggage into unit load devices (ULD) and carts in airport operations. Also, some of the leading European airports are incorporating this technology. For instance, SITA Lab’s baggage robot named Leo, a fully automated, self-propelling baggage robot can run tasks such as luggage check-in, print bag tags, and transport up to two bags with a maximum weight of 32kg. Also, it has functions that can avoid obstacles and can navigate in heavily crowded environment. In 2017, Leo, participated in a trial period at Geneva airport where passengers used the robot to check-in their bags. Due to the increase in work place safety norms, flexibility, flight traffic security, and cost optimization, these automated robots are expected to gradually become a regular process at airports all over the world in next 10 to 15 years.

Anticipated growth in air travel, modernization of airports, and technological advancements drive the growth of the market. However, increased upfront and maintenance cost of the baggage handling system (BHS) and high consequences of system failure impede the growth. In the near future, utilization of robotization in the airport’s baggage handling process is expected to create lucrative opportunities for the key players operating in this market.

North America is expected to account for the highest revenue in the global market throughout the forecast period (2018–2025). However, LAMEA is expected to exhibit growth at a high rate, predicting lucrative opportunities for the global airport baggage handling system market. The market participants continue to introduce the technologically advanced products to remain competitive in the market. Agreement and expansion are the prominent strategies adopted by the market players.