Get detailed COVID-19 impact analysis on the Armored Vehicles Market

The global armored vehicles market size was valued at $15.96 billion in 2018 and is projected to reach $21.97 billion by 2026, registering a CAGR of 4.2% from 2019 to 2026. Europe accounted for the highest share in 2018 and is anticipated to maintain its lead in the global market throughout the forecast period. 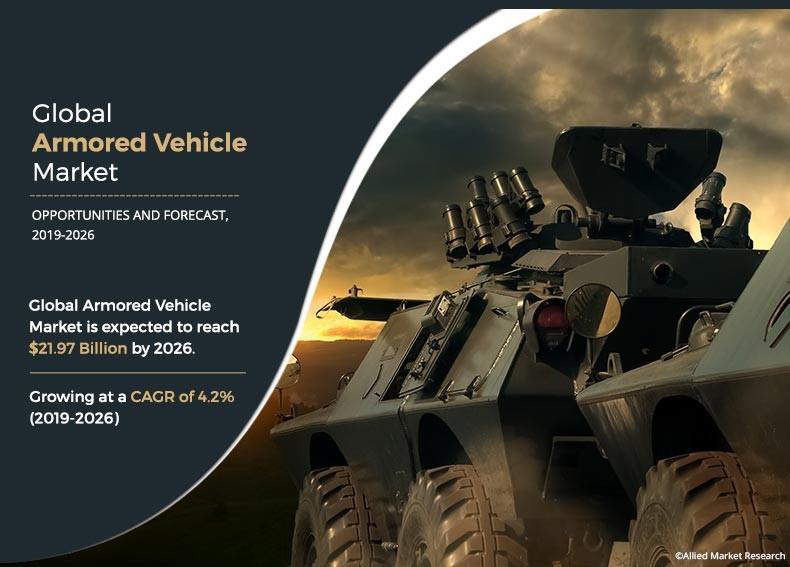 Armored vehicles can be defined as military vehicles, commercial, or passenger vehicles that are fitted with complete or partial armor plating for protection against bullets, shell fragments, or any other projectiles. Armored vehicles that are used by the defense forces can either move on continuous tracks or wheels. They play a vital role when it comes to reconnaissance, frontline combat, and modern battlefield from logistics.

Commercial is projected as the most lucrative segments

Wheel is projected as the most lucrative segments

The global armored vehicles market segmentation is based on application, drive type, vehicle type, and region. Based on application, the market is divided into defense and commercial. Based on drive type, it is bifurcated into wheel and track. Based on vehicle type, the market is categorized into armored personnel carrier, infantry fighting vehicle, main battle tanks, tactical truck, bus, limousine, sedan, and others. Based on region, it is analyzed across North America, Europe, Asia-Pacific, and LAMEA.

Armored personnel carrier is projected as the most lucrative segments

Militarization can be defined as the process in which the civilian police force adopts the military model principles that include obtaining the equipment, tactics, mindsets, and culture of the military. Coverage of police militarization and public awareness has majorly focused on the acquisition of military equipment such as aircraft, weapons, and armored vehicles. For instance, since early 1990s, the U.S. Department of Defense’s 1033 program provided law enforcement agencies special access to the military-grade equipment. In addition, this program is now extended by President Trump. Further, around 8,000 law enforcement agencies utilized this program to access more than $6 billion worth of military equipment such as bayonets, grenade launchers, machine guns, and armored vehicles. Thus, increased militarization encourages the use of military tactics and military equipment, which in turn propel the armored vehicles market growth.

The rising security challenges arising out of the increasing insurgent activities and crime rate is propelling the demand for civilian armored vehicles. In addition, armored vehicles are gaining popularity with number of public figures, and elite groups are adopting armored passenger vehicles for a greater sense of security. Leading automobile manufacturers are launching wide range of bulletproof vehicles to meet this rising demand for armored vehicles. For instance, in March 2019, Land Rover, a leading provider of luxury vehicles, launched the 2020 Range Rover Sentinel that contains armored glass and ballistic steel plate inside its body. Thus, rise in demand for bulletproof vehicles is anticipated to boost the growth of the armored vehicles market.

Unmanned ground vehicles provide remarkable potential for naval operations as these vehicles play a crucial role in supporting Marine combat and assisting in the logistics operations ashore as well as afloat. The development and deployment of these unmanned vehicles that can operate in a wide range of high-risk situations require addressing of several technical challenges. However, many countries are working with a focus on development of unmanned armored vehicles. For instance, Singapore has been working on development of unmanned land systems for a long time with the GINTIC Institute of Manufacturing Technology under the project Diana. This project explored feasibility of development of indigenous technologies for autonomous armored vehicles. In addition, this project was followed by DSTA-led Project Ulysses, which adopted specifically modified Autonomous UGV (AUGV), an M-113 armored personnel carrier (APC). This vehicle has features such as laser scanner, steering actuators, brake, and other autonomous features, which enable autonomous and remote functioning of large vehicles at all times in natural or difficult terrain. Thus, adoption of unmanned armored vehicle is anticipated to provide remarkable growth opportunities for the players operating in the armored vehicles market.

This study presents the analytical depiction of the global armored vehicles market analysis along with the current trends and future estimations to depict the imminent investment pockets.
The overall armored vehicles market opportunity is determined by understanding the profitable market trends to gain a stronger foothold.
The report presents information related to the key drivers, restraints, and opportunities of the market with a detailed impact analysis.
The current window sensors market is quantitatively analyzed from 2018 to 2026 to benchmark the financial competency.
Porter’s five forces analysis illustrates the potency of the buyers and suppliers in the armored vehicle industry.

The armored vehicles such as armored personnel carrier, infantry fighting vehicle, main battle tanks, and others, are used by the defense forces for combat, reconnaissance, and transportation of troops on the battlefield. Whereas, commercial armored vehicles are majorly used for transportation of VIPs, huge quantity of money, and other commercial purposes. In addition, many countries are working with a focus on development of armored vehicle to serve in variety of applications such as reconnaissance, infantry transport, fire support, medical evacuation, and others.

Among the analyzed regions, currently, Europe is the highest revenue contributor, and is expected to maintain its lead during the forecast period, followed by North America, LAMEA, and Asia-Pacific.

Q1. What are the new competitive developments in Armored Vehicles Market?

A. key players operating in the armored vehicle market are coming up with new competitive developments such as incorporation of artificial intelligence in armored vehicles for smooth and efficient operations in high risk situation and introduction of wide range of armored vehicles.

Q2. What is the market size, share of armored vehicles?

Q3. How can I get sample report of armored vehicles market?

A. The report sample for armored vehicle market report can be obtained on demand from the website.

Q4. Who are the potential customers of armored vehicles market?

A. National defense forces and security agencies are the major potential customers of armored vehicle market.

Q5. Which are the leading players in armored vehicles market?

Q6. How can I get company profiles on top ten players of armored vehicles market?

A. The company profiles of armored vehicle industry can be obtained from the company profile section mentioned in the report. This section includes analysis of top ten player’s operating in the armored vehicle industry as well as their last three-year revenue, segmental revenue, product offerings, key strategies adopted, and geographical revenue generated.

Q7. Which region is and will provide more business opportunities for armored vehicles in future?

A. Based on the global armored vehicle market analysis, Europe accounts to be highest revenue contributor in 2018 and provides more business opportunities during the forecast period and is expected to see a lucrative growth during the forecast period which is also expected to provide more business opportunities for armored vehicle in future.

Q8. Who are the service providers of armored vehicles industry?

Q9. What are the key growth strategies of armored vehicles industry players?

Q10. What are the applications of armored vehicles market?

Q11. What is the impact of Post COVID-19 scenario in armored vehicles market?