The Asia-pacific Medical Carts Market is anticipated to reach $555 million by 2022, growing at a CAGR of 13.7% from $224 million in 2015. A medical cart or trolley is a wheeled cabinet with drawers and trays that is used in various medical, surgical, and therapeutic modalities in hospital and clinical settings to keep drugs, tools, equipment, and medical devices for the stipulated treatment. The Asia-Pacific medical carts market is divided into four types -anesthesia carts, emergency carts, procedure carts, and other carts. 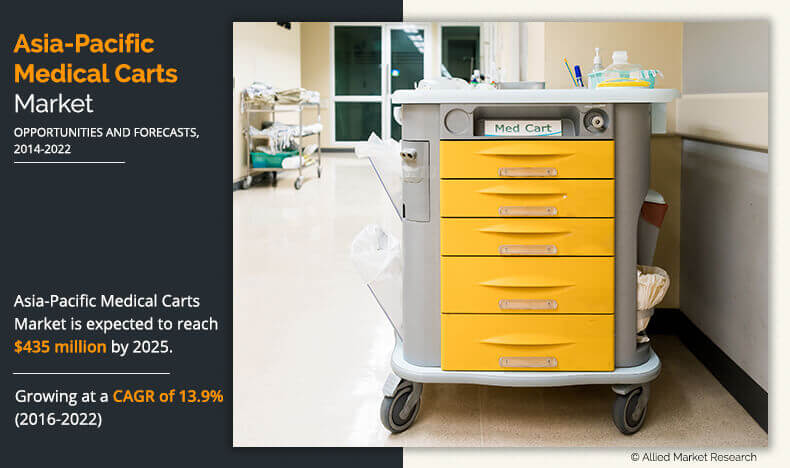 The rise in focus on patient safety, improved nursing efficiency, and ease in clinical workflow due to medical carts has raised the demand for these trolleys across Asia-pacific. This significant rise in volume of sales was attributed to the rapid expansion of the healthcare industry and healthcare reforms in China and India. Asia-Pacific holds immense potential for the growth of medical equipment for enhancing the medical infrastructure, thereby driving the growth of medical carts market both in volume sales and revenue. However, cost incurred for the maintenance of medical carts and lack of skilled professionals could limit the market growth. 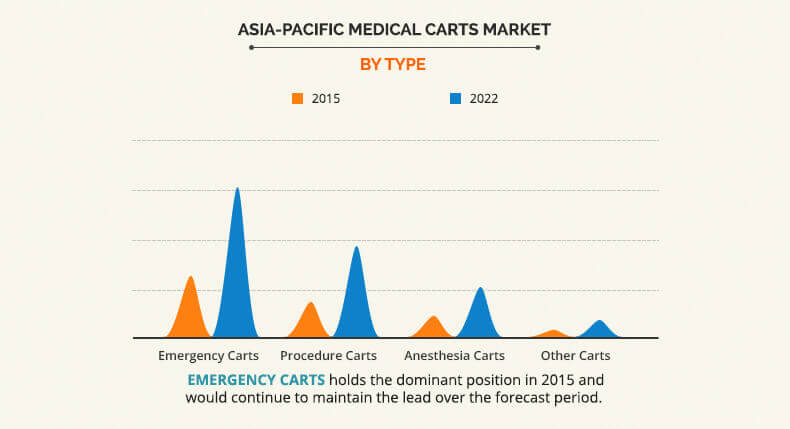 A medical cart, is a movable collection of emergency equipment and supplies such as medication. These medical carts are readily accessible to health care workers and strategically placed in medical setting such as hospitals and clinics. Medical carts are utilized for improving nursing workflow efficiency. This equipment is very useful during medical emergencies such as accidents and major injuries, to be treated or diagnose near patient bed side. The medical carts market is growing at significant pace owing to the rise in geriatric population, growing cases of sudden cardiac arrest that needs emergency carts and improving healthcare infrastructure across Asia-Pacific region. 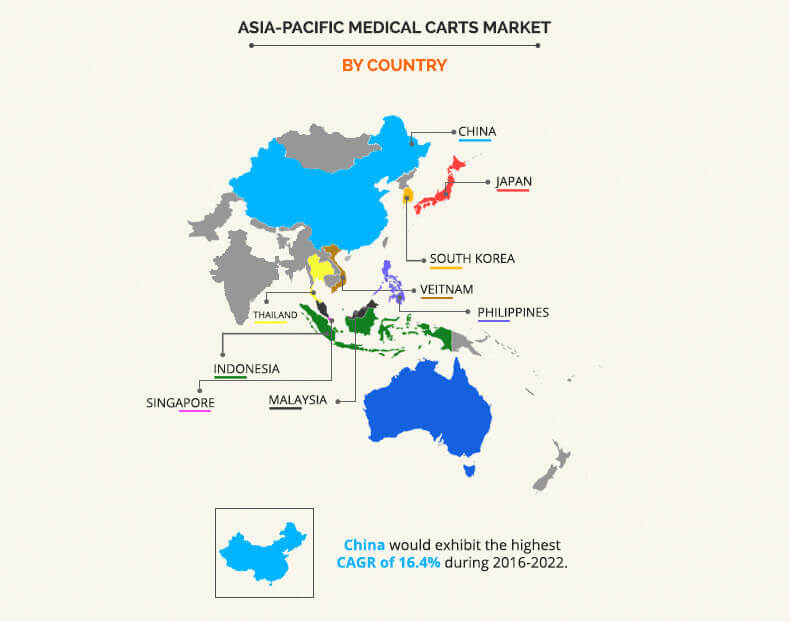 Rapid economic growth, increase in healthcare expenditure, and hospital reforms drive the medical carts market in China. This is attributed to the ageing population and advancement in private & public hospitals. Moreover, the healthcare reform in China is strongly influenced by policies issued at various government levels including, state council, national health, and family planning commission.

The China medical carts market is segmented into four major product types such as emergency carts, procedure carts, anesthesia carts, and other carts. Emergency medical carts hold the largest share of more than two-fifths of the Chinese market in terms of volume and nearly half in terms of value in 2015. This is attributed by the growing number of emergency procedures performed such as accidents, traumas, injuries, heart attacks, and others. These emergency carts are also known as crash carts and they must comply with advanced cardiac life support (ACLS) protocol.

Similarly, procedure carts hold the second largest share of nearly one-third in the Chinese market in terms of volume and more than one-fourth in terms of value in 2015. These carts are used for a wider range of medical procedures such as trauma, critical care, suture, dressing, airway, and IV therapy as they offer better storage and extra capacity.

Key Benefits of the Report

The Asia-Pacific medical carts market is segmented based on type and country.

The utilization of medical carts is expected to rise proportionally with the rise in healthcare spending and hospital reforms in emerging countries of Asia-Pacific region. The medical carts market caught the interest of healthcare industry owing to its ease in medical workflow and lowering the medication error across various applications. Medical carts with new utilities such as UPS & battery charging systems, silent medical casters, and counting machine tray are some of the latest trolleys available in the market. Nevertheless, the growth in need of more organized trolleys for emergency purposes has raised the demand for newer versions of medical carts. Anesthesia medical carts, designed to meet the unique needs by the anesthesia department such as keyless locking option, configurable medication storage with multiple bin and drawer sizes drive the market growth. In addition, rise in emergency cases such as accidents, trauma, causalities, and other injuries has increased the demand for both emergency and anesthesia medical carts in the region.

The growing healthcare expenditure in India, China, and Japan, as well as rapid growth in aged population and increasing demand for quality healthcare have fueled the demand for medical carts. In addition, growing number of private & public hospitals, urbanization, sedentary lifestyle, and awareness on the importance of health management is anticipated to strengthen the medical carts market in Singapore, Indonesia, and South Korea. However, lack of skilled medical professionals, mounting hospital costs, and maintenance of medical carts could restrain the market growth.