Get detailed COVID-19 impact analysis on the Automotive Seat Market

Automotive seat is an important part of a vehicle as it provides comfort to the person who is driving. Moreover, these seats also offer a stylish look to a vehicle as they have ability to integrate various interior parts and different type of fabric materials. In addition, automotive seats are considered as one of the crucial components in vehicles as they are designed to support thighs, the buttocks, lower and upper back, and head support. They are usually made up of steel, aluminum, or mixed material. One of the major factors that driving the automotive seat market share is rising sales of passenger, electric & commercial typed vehicles across the globe. 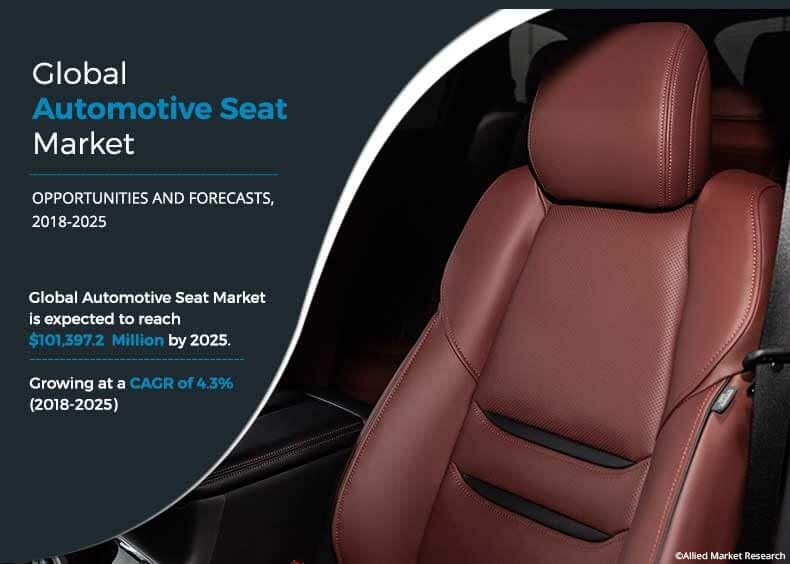 Region wise, currently Europe is driving the automotive seat market due to the high focus on higher fuel efficiency and autonomous driving. Moreover, the demand for these features has increased due to improved safety requirements in Europe. Therefore, rise in the manufacturing sector and industrialization is anticipated to create opportunity for further growth in the automotive seat market.

In addition, the growth of the automotive seat market is driven by rise in sales of luxurious vehicles in developing countries, increase in need for climate-controlled seat technology, and surge in need for lightweight seat frames. Moreover, factors such as rise in passenger vehicle sale due to enhanced lifestyle of middle-class families coupled with increase in disposable income and surge in demand for feature enabled advance seats fuel the growth of the automotive seat market.

However, volatility in the prices of metal and downshift in the sales and production of automobiles are the key factors that restraining the growth of automotive seat market. Furthermore, rise in demand for animal products free vehicles and growth in popularity of autonomous vehicles are anticipated to offer lucrative opportunities for the market expansion. The market forecasted from year 2018-2025 by considering all the driving factors that influence equally to the automotive seat market applications. 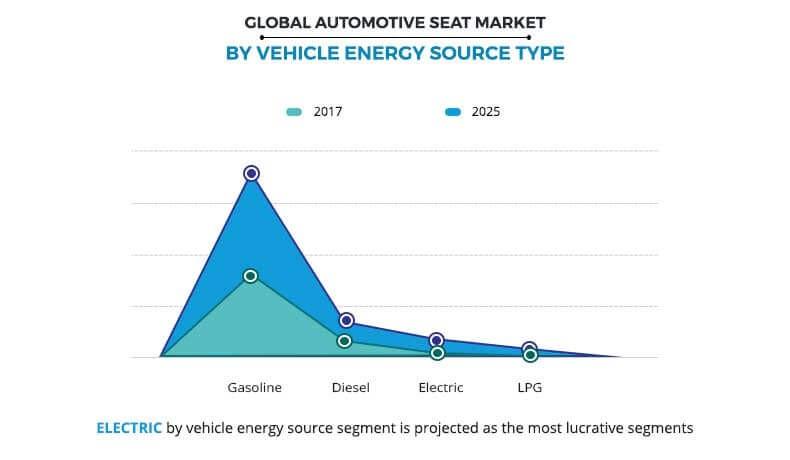 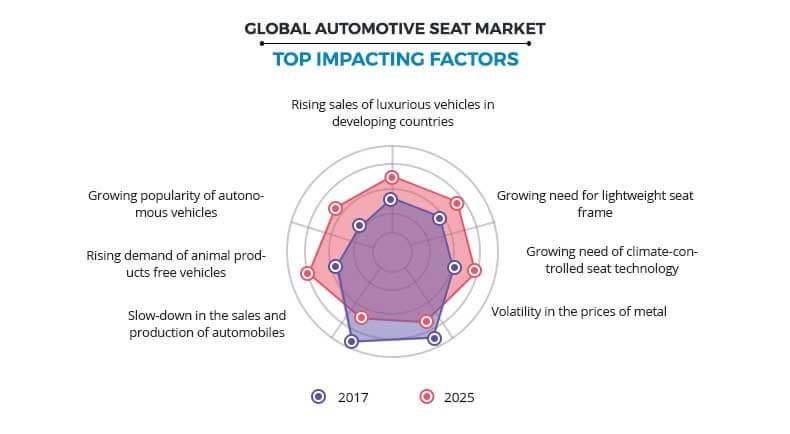 Rise in sales of luxurious vehicles in developing countries

Furthermore, India is also one of the world’s largest passenger car market in terms of volume, with luxury cars just accounting for around 1% of vehicles sold in 2017. However, vehicle manufacturers, both luxury and non-luxury segments, foresee a high potential for sales growth in the country and are focusing to invest further in this fast-growing market. In 2017, the growth rate of luxury vehicles was in the range of 14%-20%. Therefore, growth in sales of luxury vehicles in developing countries such as China and India is expected to increase the demand for premium quality seats in the same region. Thus, such steps from the developing regions and latest innovation in fabric material specially for the premium typed vehicles are creating a demand for the automotive seat market.

There is growing focus of various governments, agencies, and institutions to reduce the global vehicle emissions due to rise in global warming. Recently, in May 2019, it was announced that the cars and motorbikes running on petrol or diesel will be banned in Amsterdam from 2030. Similarly, in November 2018, Madrid, Spain, banned polluting vehicles from the city center, only vehicles with producing zero emissions are allowed to drive freely. Hence, there is increase in need for lightweight set frames, which are further expected to increase the fuel efficiency of the vehicles.
In January 2018, Adient, one of the major automotive seat manufacturers launched new lightweight solutions. It is expected to reduce the weight of its vehicle seats by around 20% to 30% and optimizing the use of lightweight materials, such as glass or carbon fiber-reinforced plastics, magnesium, high-strength steel, or aluminum in the seat. Such launches are helping companies drive the growth of the automotive seat market.

The automotive seat market is driving owing to the increasing global warming at extreme temperatures, which further making difficult for the drivers as well as passengers to travel in the vehicle. For example, if a passenger car is left in the sun all day, it will be uncomfortable for the passenger and driver to sit in the car due to trapped heat. However, technological advancements have led development of climate-controlled seating technology in the car seats, which allow you to cool them right away. These seats have perforated inserts with chillers and fans built into them to accomplish this task. Similarly, there are fabric-based heaters in the seats which are useful during cold weathers. Therefore, there is growing focus on providing climate-controlled seats. Different strategies are implemented by the giant companies operating in this automotive seat market. For instance, recently, in January 2019, Lear and Gentherm launch a joint development partnership to accelerate the future of thermal seating solutions. Although these seats were earlier only available in luxury vehicles, now they are also available in the standard vehicles. Some of the standard vehicles that have climate-controlled seats are listed below.

The rise in need for this type of climate-controlled seats is expected to drive the automotive seat market during the forecasted period.
Volatility in the prices of metal

The materials used for the manufacturing of metal structure of a seat include aluminum and steel. Some of the suppliers of the aluminum and steel include Martinrea International Inc., Novelis, ArcelorMittal, Baosteel Group Hu, POSCO, Jiangsu Shagang, Tata Steel Group, HYUNDAI Steel Company, JFE Steel Corporation, and others. One of the major factors for the high costs of the automotive seats is the metals used for seat frames. Therefore, fluctuation in the cost of the aluminum and steel also fluctuates the cost of the manufacturing seat.

The growth in trade war among various countries such as the U.S. and China has led to increase in prices of the metals. In July 2018, the U.S. tariffs on metal imports increased the prices of steel by around 38%-42% compared to 2017. This has affected the automotive industry which uses metal heavily in their product. Companies such as General Motors Co. and Harley Davidson Inc. are expected to lower the operating margins. Similarly, auto-component suppliers are expected to be affected. The overall increased price of a vehicle can decrease the sales of vehicle during the forecast period.

Downshift in the sales and production of automobiles

The factors such as high focus on environmental policies and investment in alternatives such as on-demand cars or public sectors are causing downshift in the sales and production of automobiles. In 2018, the China’s car sales fell continuously for five consecutive months until November.

Moreover, in 2018, vehicle manufacturers in India have announced that they have lowered the car and SUV productions due to poor demand. In November 2018, the vehicle manufacturers in India decreased production by 21%. The global production of passenger cars and commercial vehicle decreased by around 1% in 2018. Therefore, global downshift in the automobile sales and production is expected to restrain the growth of the automotive seat market during the forecast period.

The number of vegans is increasing rapidly across the globe, for example, the U.S. vegan population was more than 5% in 2017 and is expected to increase further. Therefore, this is leading to increase in demand for vehicles that are free from animal products such as leather seats. Apart from vegans, animal right activists also demand vehicles free from animal products. Since 2017, Tesla’s seat options are vegan, and has announced that upcoming Model Y will be completely leather-free. Similarly, in April 2019, during an auto-show Land Rover's new line of leather-free, fully vegan materials was developed for its 2020 Range Rover Evoque, Range Rover Velar, and Jaguar I-Pace SUVs. Such awareness and initiative for the use of animal product free vehicles will demand the growth for the automotive seat market.

Over the past few years, there is growth in the popularity of autonomous vehicles. Recently, in May 2019, it was announced that Lyft riders in Phoenix area in Arizona state of the U.S. will be able to call one of Waymo’s self-driving minivans for a ride. Initially, just 10 vehicles will be available on Lyft’s app in the handful of towns around Phoenix. After, the introduction of autonomous vehicles, the focus of major companies will be on the interiors of the vehicle. This will result in change in the seating structure of the autonomous vehicles.

Many of the leading automotive seat companies such as Adient plc. are working toward the development of seats for autonomous vehicles. For example, Adient plc. in September 2017, was working on new safety solutions for the seats of future generation vehicles such as alternative seating layouts in autonomously driven vehicles. Thus, autonomous vehicles are expected to provide lucrative opportunities for the growth of the automotive seat market in the future.

The seats used in most of the passenger and light commercial vehicles have three main parts that include seat back, seat base, and the head-rest. These components are usually constructed from foam to provide comfort to the rider. Furthermore, different type of trim, foam, and fabric material are used by manufacturers to provides balancing comfort, support, safety, and recycling properties.

The growth of the automotive seat is driven by rise in sales of luxurious vehicles in developing countries, increase in need of climate-controlled seat technology, and surge in need for lightweight seat frames. Moreover, factors such as increase in passenger vehicle sale due to enhanced lifestyle of middle-class families coupled with increase in disposable income and surge in demand for feature enabled advance seats fuel the growth of the automotive seat market.

Volatility in the prices of metal and downshift in the sales and production of automobiles are the key restraining factor of this market. Furthermore, rise in demand for animal products free vehicles and growth in popularity of autonomous vehicles are anticipated to offer lucrative opportunities for the market expansion.

Among the analyzed geographical regions, currently, Asia-Pacific is the highest revenue contributor, and is expected to remain dominant during the forecast period, followed by Europe, North America, and LAMEA. This growth is attributed to increase in passenger and electric vehicles sales and rapid economic improvement.