An autonomous aircraft is the next-generation aircraft that can fly using automated control systems, without the intervention of a human pilot in the cockpit. This level of autonomy requires sensors, embedded software and artificial intelligence (AI) systems that continuously perceive risky situations, plan a safe path of motion and execute those motions. Currently, most autonomous aircrafts are unmanned aerial vehicles used as drones for military operations, delivery vehicles, agriculture, emergency rescue, space exploration, and film production, among others. At present, major companies functioning in the global autonomous aircraft market are majorly focusing on the product innovations and R&D of fully autonomous products for commercial & military applications. For instance, in September 2021, Northrop Grumman unveiled the design of a new autonomous aircraft named Model 437, with a 3,000-mile range. The company has partnered with Scaled Composites to design the aircraft as a potential force multiplier for the U.S. Air Force.

The COVID-19 crisis is creating uncertainty in the market. Governments of different regions have announced total lockdown and temporarily shutdown of industries, thereby adversely affecting the overall production and sales. It also resulted in flight cancellations, travel bans, and quarantines, which led to massive slowing of the supply chain and logistics activities across the world. Also, the aviation industry is suffering financial losses in maintenance of airlines & airports without any growth in revenue, due to fall in air passenger traffic after the COVID-19 outbreak. Moreover, autonomous flight system test runs have delayed due to operational issues caused travel restrictions imposed by governments around the world as precautionary measures against COVID-19. However, COVID-19 has had an impact on numerous operations of the OEMs, from R&D to manufacturing. The industry participants experienced short-term disruption in delivery systems and roll-outs, such disruption has created new opportunities for unmanned aerial vehicles technology such as drones with the adoption of autonomous aircraft system and has boosted usage of unmanned aerial systems (autonomous systems) across different commercial sectors. 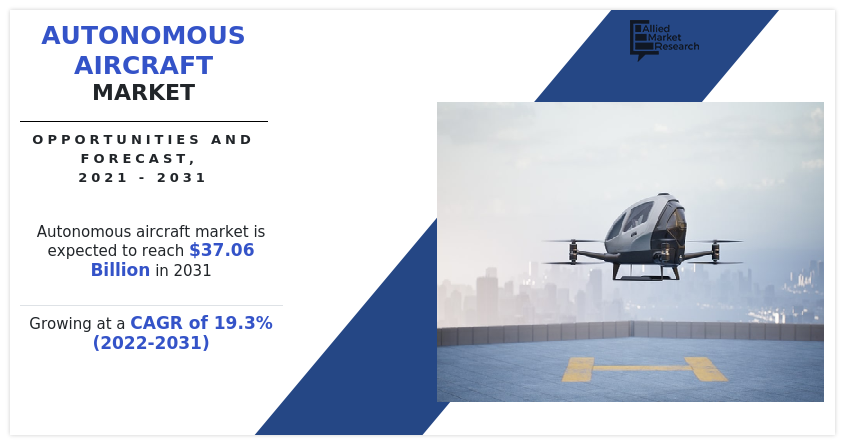 Autonomous aircrafts can be identified with their ability to perform complex maneuvers for extended period of time at remote distances. Installation of autonomous system on an aircraft reduces the workload of a pilot. The autopilot keeps the aircraft on a predefined path at cruising altitudes. It can even perform climbs, descents and turns as instructed. Hence, the speed and reliability of fully autonomous systems can make them better equipped than humans to handle urban skies that are filled with obstacles.

The factors such as rise in the adoption of autonomous cargo aircraft, surge in autonomy to reduce human errors, and increase in adoption of artificial intelligence in autonomous aircrafts drive the growth of the autonomous aircraft market. However, increase in security issues & cyber threat and lack of standard infrastructure for operation & complex design and high initial investment are the factors expected to hamper the growth of the market. In addition, proactive government initiatives & support and rise in demand for improved surveillance are expected to create ample opportunities for the key players operating in the autonomous aircraft industry.

Wide body is projected as the most lucrative segment

The autonomous aircraft market is segmented into aircraft size, maximum takeoff weight, application, end-use and region. By aircraft size, the market is divided into narrow body, wide body, and others. By maximum takeoff weight, it is fragmented into less than 2500 kg and more than 2500 kg. By application, it is categorized into military & defense, civil & commercial, and others. By end use, it is further classified into cargo & industrial and passenger. By region, it is analyzed across North America, Europe, Asia-Pacific, and LAMEA.

More Than 2500 Kg is projected as the most lucrative segment

Cargo planes & drones are expected to be the first to adopt this autonomous aircraft technology. As cargo drones are capable of transporting heavy payloads, they are entering flight test and some experts expect them to start operational service before air taxis carry passengers in urban areas. In addition, the growth in the e-commerce industry is driving the air cargo demand, which may increase the demand for air cargo pilots in the near future. Hence, most of the developments in the autonomous aircraft market are aimed at bringing the autonomous cargo aircraft into commercial use, to fill in the gap due to the pilot shortage. Boeing’s futuristic NeXt division oversees its heavy-duty drone prototype that is capable of lifting a 500-pound payload. The cargo air vehicle conducted its first indoor flight in 2018 and it may move to outdoor testing in 2019. Furthermore, countries such as U.S., Singapore, UAE, China, and other developed nations are using autonomous aircraft to deliver healthcare services such as medicines and other emergency products. Thus, companies are looking forward to design such autonomous aircrafts for multipurpose applications. Hence, such several developments and innovations in the industry lead to the adoption of autonomous aircrafts, which thereby propels the autonomous aircraft industry growth.

Other applications are projected as the most lucrative segment

Autonomous technologies eliminate the risks of mishaps due to human errors. Rise in accidents due to human error coupled with robust technological advancements in the artificial intelligence has encouraged the need for adopting the autonomous technologies in aircrafts. Autonomous aircraft reduces the risks of human error in difficult terrains or situation where humans can’t operate. Various players in aviation industry are testing for the automation in its operation. For instance, in 2019, Erickson Inc. (an aviation company having headquarters in Oregon, U.S.) signed a contract to integrate S-64 (air crane helicopter) with Sikorsky’s (an aircraft manufacturer having headquarters in Connecticut, US) MATRIX Technology autonomous flight control. Matrix is a combination of hardware and software flight technology that gives the operator the ability to fly helicopters reliably as autonomous or optionally piloted aircraft. Moreover, matrix has been installed & tested on a modified S-76B (medium-sized utility helicopter) to take leverage of full-authority flight control input for autonomous flight for take-off, route planning, site selection and, landing. In addition, autonomous systems provide capability to operate in low-visibility situations where a pilot’s vision could be clouded by smoke. Such innovations in autonomous flight systems are expected to drive the global autonomous aircraft market.

Passenger is projected as the most lucrative segment

The developed countries such as the U.S., the UK, Japan, and China, have designed & developed logistics infrastructure suitable for autonomous systems. However, lack of infrastructure and standard operating procedures for autonomous aircrafts in Asian & Middle East countries have hampered the market growth. Furthermore, high initial cost associated with installation of networking technologies and connectivity hardware is anticipated to hamper the growth of the market. For instance, air-to-ground technology costs around $80,000 per aircraft, however, cost associated with deployment of satellite technology is around $400,000.

Rise in demand for improved surveillance

The growth in threat from terrorism and increase in security concerns worldwide hav led to increased government expenditure for autonomous aircraft systems or drones to improve surveillance capabilities. Moreover, autonomous aircrafts can carry out stealth operations, night surveillance, and operate at any location with payloads including high imagery cameras such as Zenmuse Series by DJI Technology, DG series by Autel Robotics, and HDZoom30 by Aeryon Labs Inc. Such benefits have led to increasing investments by governments to procure and develop a large number of autonomous aerial vehicles globally, which thereby propels the demand for autonomous vehicles (aircrafts) market. For instance, in March 2021 Elbit Systems Ltd. signed a $300 million contract to supply Hermes 900 autonomous aircraft systems to a country in Asia. Also, the development of advanced payloads for surveillance fuels the growth of the market. Such innovation and the introduction of cost-effective products with increase in demand for improved surveillance are expected to create lucrative opportunities in the autonomous aircraft market.

This section provides the opinions of various top-level CXOs in the global autonomous aircraft market. The market is expected to witness a significant growth due to robust technological advancements in the artificial intelligence and adoption of autonomous aircraft for civil aviation due to the associated benefits, such as safety, reliability, and affordability, can lead to the growth of the market in the coming years. Moreover, increasing investments in R&D and a growing number of companies in developed regions such as China, U.S., Singapore, and other developed countries are using these autonomous aircrafts to deliver goods & services and even to deliver medical emergency services. For instance, in April 2021, Xwing demonstrated its first autonomous gate-to-gate flight with a Cessna Grand Caravan 208B utility plane. It was able to perform maneuverability operations such as leaving the gate, taxi, take-off, land and return to the gate by itself.

Furthermore, the autonomous aircraft market is expected to witness significant growth due to rise in collaboration of the market players with national agencies or organizations. For instance, in February 2020, Airbus entered into collaboration with the Civil Aviation Authority of Singapore (CAAS) to enable urban air mobility (UAM) in Singapore. Likewise, in the near future, autonomous aircraft such as drones can also increasingly be used for the transportation of cargo. As cargo drones are capable of transporting heavy payloads are entering flight test and some experts expect them to start operational service before air taxis carry passengers in urban areas. For instance, Boeing’s futuristic NeXt division oversees its heavy-duty drone prototype that is capable of lifting a 500-pound payload. The cargo air vehicle conducted its first indoor flight test last year, and it may move to outdoor testing in 2019. Hence, such several developments and innovations in the industry leads to the adoption of autonomous aircrafts, which thereby propels the market growth.

Among the analyzed regions, North America is the highest revenue contributor, followed by Europe, Asia-Pacific, and LAMEA. On the basis of forecast analysis, LAMEA is expected to lead during the forecast period, due to increase in investments being carried out by majority of the companies across LAMEA.

Q1. What are the upcoming trends of autonomous aircraft market in the world?

A. Introduction of unmanned aircrafts are the upcoming trends of Autonomous Aircraft Market in the world

Q2. What is the leading application of autonomous aircraft market?

A. Military & Defence, Civil & Commercial, Others are the leading application of Autonomous Aircraft Market

Q3. Which is the largest regional market for autonomous aircraft?

A. North America is the largest regional market for Autonomous Aircraft?

Q4. What is the estimated industry size of autonomous aircraft?

Q5. Which are the top companies to hold the market share in autonomous aircraft?