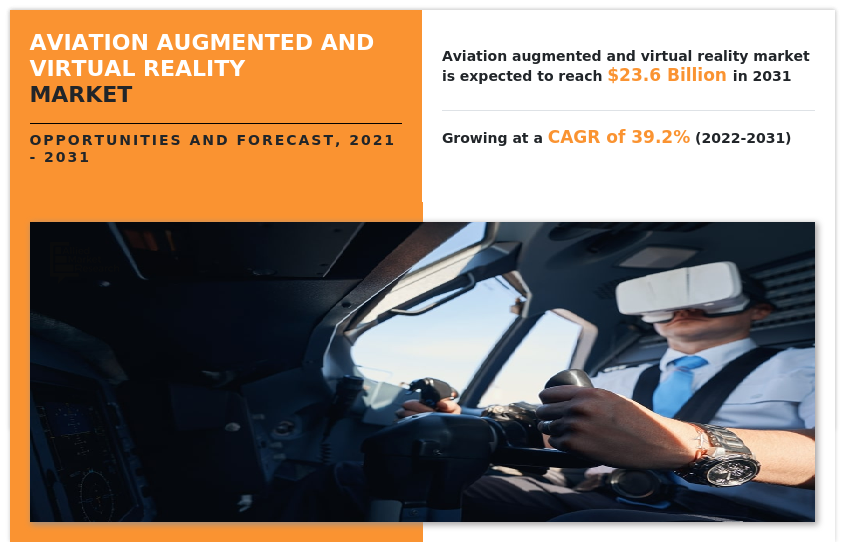 The aviation augmented & virtual reality market is segmented into Technology, Type, Component, End Use and Function.

Applications for immersive and augmenting display technologies are widespread within the aerospace and defense sector worldwide. In aerospace and defense sector, augmented and virtual reality (AR and VR) technology is majorly used to refine skill sets of pilots and crew, to improve situational awareness of soldiers, and training astronauts. . In military, augmented and virtual reality technology plays an important role in creating an ambience similar to actual reality in a cost-effective manner to train soldiers. Products such as headsets, driver training simulator, turret training simulator, crew training simulator, role player station are used in defense and security segment for training purposes.

Factors such as surge in adoption of Augmented Reality (AR) and Virtual Reality (VR) based solution for trainings and marketing purposes, and increase in production and deliveries of commercial aircraft are anticipated to boost the growth of the global aviation augmented and virtual reality market size during the forecast period. However, serious threats to the physical and emotional wellbeing of the end-users, and increase in security issues and cyber threat are expected to hinder the growth of the global market during the forecast period. Moreover, increase in demand from emerging regions and formation of mixed reality (MR) from integration of AR and VR are expected to create opportunities for the aviation augmented and virtual reality market share in the future.

Non Marker Based is projected as the most lucrative segment

The aviation augmented and virtual reality market is segmented on the basis of technology, type, component, end use, function, and region. By technology, the market is further segmented into marker based, non-marker based, immersive, and non-immersive. By type, the market is classified into augmented reality, and virtual reality. By component, it is divided into hardware, software and solutions. By end use, it is segmented into line civil, and military. By function, it is divided into training, and operation. By region, the AR and VR in aviation industry is analyzed across North America, Europe, Asia-Pacific, and LAMEA.

Augmented Reality is projected as the most lucrative segment

Augmented and virtual reality offers a cost effective and efficient solution in training and skill development as it replicates the real scenarios by using augmented and virtual reality enabled solutions. For instance, in civil aviation or military application, it is costlier to utilize an actual aircraft to train a pilot as it can be harmful for the pilot as well. Securely piloting an aircraft requires dozens of hours of actual flight time, and classroom study to develop, demonstrate, and test the legally recognized skill set and proficiency level, which is necessary to become a licensed pilot. Experiential training provided by AR and VR solutions provides real-time feedback, improves the efficiency of skills transfer, increased knowledge retention, and better captures enterprise knowledge within an organization. Airlines and airports are also using VR and AR to train staff, improve operations and optimize maintenance time. According to the International Air Transport Association (IATA), AR and VR reduces the duration of training by 25% while simultaneously improving the knowledge retention of trainees by 4 times. Moreover, airline operators are using AR and VR solutions for marketing of their offerings. For instance, Lufthansa is using VR headsets to support upselling upgrades at the gate by showing passengers what business and first-class upgrades look like. Moreover, Gatwick Airport in UK launched an AR-enabled app which helps passengers navigate the airport while also giving them flight departure information and personalized offers. Such cost-efficient benefits associated with augmented and virtual reality-based solutions are expected to fuel the growth of aviation augmented and virtual reality market.Â

Increase in production and deliveries of commercial aircraft

Rise in delivery of aircrafts as a part of fleet modernization program drive the aviation augmented and virtual reality market. For instance, in January 2022, InterGlobe Aviation Ltd. ran by IndiGo received delivery of 18 aircrafts in October-December 2022, the highest quarterly number for both 2020 and 2021. Also, aviation companies adopt aggressive production plans to meet the higher output rates. For instance, in May 2021, Airbus SE announced increase in production of popular Airbus A320 planes. It also planned to increase production of A220 planes to 14 planes per month.

Aircraft manufacturers expand conversion lines by turning old passenger planes into freight carriers. For instance, in November 2021, Boeing announced plans of addition of three conversion lines for the market-leading 737-800BCF across North America and Europe. Boeing is set to increase its conversion lines capacity by 60% by 2022, while Airbus aims to triple its output of converted A321s and A330s by 2024. Various aircraft operators have started using Augmented Reality (AR) and Virtual Reality (VR) solution into in-flight entertainment system for enhanced consumer experience improved passenger experience. For instance, in September 2018, the Alaska airline begins offering VR solutions to their passenger to first-class fliers on select routes. Moreover, the growing aircraft fleet must go through regular and mandatory maintenance services. This demand is expected to drive the market for AR VR technology to be integrated for MRO and maintenance of aviation aircraft. Therefore, increase in production and deliveries of commercial aircraft is expected to fuel the aviation augmented and virtual reality market during forecast period.

The people using virtual reality have faced eye strain, headaches and, in some cases, nausea. Various experts in AR and VR also said that it is due to the way VR affects the eye-brain connection. Furthermore, a certain percentage of users have experienced motion sickness, anxiety, and severe eyestrain after using VR headsets for prolonged period. The AR and VR technology disconnect the users from the real environment completely, creating physical dangers. This in turn results in cause of retinal radiation which may be a potential cause for eye cancer. Such drastic causes of AR and VR units if not addressed properly affect the adoption rate of virtual reality or augmented reality technologies. Thus, health concerns restrain the growth of the aviation AR and VR market.

Training is projected as the most lucrative segment

Increase in demand from emerging regions

The emerging countries, such as China, India, Brazil and others are anticipated to create new growth opportunities for prominent players operating in the aviation AR and VR market. For instance, in September 2019, according to the Commercial Aircraft Corporation of China, Ltd., the China market was projected to witness a strong demand for commercial aircraft over the next 20 years. In addition, according to its market forecast report (2018-2037), 9,008 passenger aircrafts valued at approximately $0.16 trillion (Â¥9 trillion) are estimated to be delivered.

Moreover, Latin American countries expand the aviation sector amid rise in air traffic. For instance, in June 2021, Brazilian Air Force planned to nearly double its order of Saab Gripen fighters. According to the Argentina‐™s Defense Ministry‐™s statement, the government of Argentina announced plans to buy up to $664 million-worth of multipurpose fighter jets to safeguard its airspace. The augmented and virtual reality solutions is expected to provide cost effective, immersive, and interactive solutions for defense aircrafts. In addition, simulation provided by augmented and virtual reality in aerospace applications replicate difficult and dangerous scenarios. This enables trainees to practice crucial scenarios repeatedly while preventing damage to equipment and avoiding physical harm. Thus, these developments are expected to rise the demand for aviation augmented and virtual reality systems which drive the market growth during the forecast period.

Asia-Pacific would exhibit the highest CAGR of 42.0% during forecast period

The aviation augmented and virtual reality market is expected to witness significant growth, due to increase in demand for better passenger experience. Moreover, increase in penetration of smart devices and connected solutions is propelling the market for augmented and virtual reality in aviation. Augmented reality (AR) enables interactive experience with a real-world environment by a computer enhanced alteration to the images of the objects from the real-world to provide a composite view. In addition, AR adds digital elements such as visual, auditory, and haptic feedback. Presently, virtual reality (VR) is an interactive simulated experience allowing user to immerse and interact with a computer generated 3-D world through sound and sight. AR and VR in aviation is majorly used for simulation and training of pilots, ground staff, maintenance crew, and mechanics, among others.

In addition, market participants are continuously focusing on partnership efforts to match changing end-user requirements. For instance, in November 2021, Bohemia Interactive Simulations entered into a partnership with Kongsberg Defense and Aerospace, a subsidiary of KONGSBERG, Norway’s premier supplier of defense and aerospace-related systems and solutions to jointly develop simulation solutions for the KONGSBERG family of PROTECTOR Remote Weapon Systems.

Q1. What is the estimated industry size of aviation AR and VR?

Q2. What are the upcoming trends of aviation AR and VR market in the world?

A. Growing adoption of Augmented Reality (AR) and Virtual Reality (VR) based solution for trainings and marketing purposes and formation of mixed reality (MR) from integration of AR and VR are the upcoming trends of aviation augmented & virtual reality market

Q3. What is the leading application of aviation AR and VR market?

A. Civil aviation is the leading application of aviation augmented & virtual reality market

Q4. Which is the largest regional market for aviation AR and VR?

A. In 2021, North America is the largest regional market for aviation augmented & virtual reality

Q5. Which are the top companies to hold the market share in aviation AR and VR?