The global bunker fuel market size was valued at $109.6 billion in 2020, and is projected to reach $164.9 billion by 2030, growing at a CAGR of 4.3% from 2021 to 2030. Bunker fuel is a fuel oil used in marine vessels. It is poured into the ship bunkers to keep the engines running. Ships use three types of marine fuels, which include high sulfur fuel oil, low sulfur fuel oil, and diesel oil. Presently, growth in awareness toward reducing environmental pollution and stringent government regulations are expected to provide lucrative growth opportunities for the fuels, including liquefied natural gas (LNG), gasoil, and liquefied petroleum gas (LPG) as a substitute to the above-mentioned bunker fuels.

The COVID-19 pandemic across the world has led to decrease in demand for marine fuel which diminished the market revenue of bunker fuel in 2020.

Lockdown imposed due to the outbreak of the COVID-19 pandemic resulted in temporary ban on the import and export thereby, disrupting the supply chain, which, in turn, hampered the bunker fuel market growth in the second, third, and fourth quarter of 2020. However, the market recovered in the late year or by the first quarter of 2021 as the demand for bunker fuel from the maritime transport and shipping industry increased. 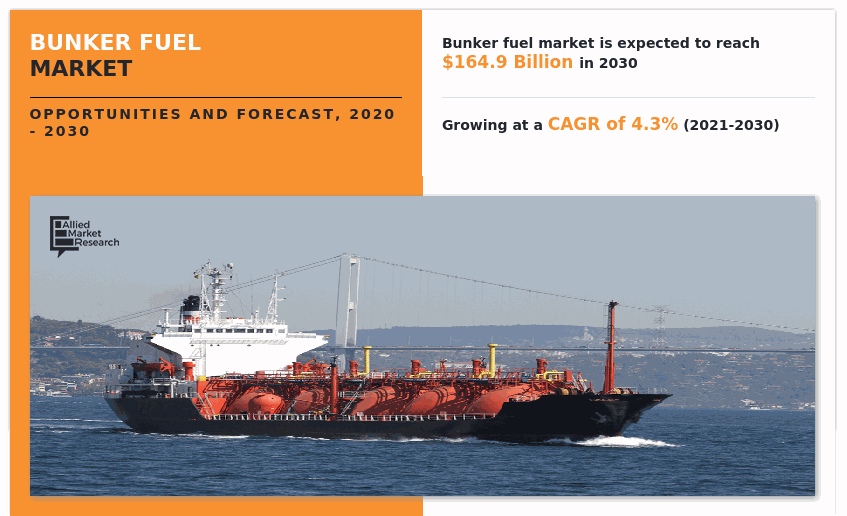 he global bunker fuel market is segmented on the basis of type, commercial distributor, application, and region. Depending on type, it is classified into high sulfur fuel oil, low sulfur fuel oil, marine gas oil, and others. According to commercial distributor, it is categorized into oil majors, large independent, and small independent. As per the application, it is fragmented into bulk carrier, oil tanker, general cargo, chemical tanker, fishing vessels, gas tankers, and others. Region wise, it is analyzed across North America, Europe, Asia-Pacific, and LAMEA.

For instance, in February 2020, Lukoil Marine Bunker Ltd. (a subsidiary of Lukoil) acquired two bunkering tankers , namely, G. Puccini and G. Rossini for operation in Big Port St. Petersburg. This will strengthen the position of the company in the bunkering sector of the Gulf of Finland.

The low sulfur fuel oil is projected as the most lucrative segment.

The oil majors is projected as the most lucrative segment.

On the basis of commercial distributor, the oil major segment holds the largest bunker fuel market share, in terms of revenue, and is expected to maintain its dominance during the forecast period. This growth is attributed to dominance of oil majors in the crude oil tanker chartering business across the globe.

The container is projected as the most lucrative segment.

By application, in 2020, the container segment holds the largest share, in terms of revenue, and is expected to grow at a CAGR of 4.6%. This is attributed to increase in demand for cargo transportation through ships and rise in trade-related agreements. In addition, rise in number of manufacturing units and factories in the region such as Asia-Pacific and LAMEA is anticipated to drive the growth of the bunker fuel market for container shipping.

Asia-Pacific is projected as the most lucrative segment.

Asia-Pacific garnered the highest share in the bunker fuel market in 2020, in terms of revenue, and is anticipated to maintain its dominance throughout the forecast period. This is attributed to numerous factors, including increase in presence of huge consumer base and rise in maritime trade activities in the region. Moreover, presence of the developing countries such as China, Japan, Singapore, South Korea, and India contribute toward the growth of the bunker fuel market in Asia-Pacific.

According to the CXOs, the global bunker fuel market registered a dynamic growth over the past few years, owing to drastic growth in offshore hydrocarbon exploration activities in the developing countries such as India, China, and Japan. In addition, the International Maritime Organization (IMO) regulations over reduction of sulfur cap from 3.5% to 0.5% to reduce the marine pollution are expected to drive the growth of the bunker fuel market. As these stringent environmental regulations might enhance the reduction of marine pollution. The lower sulfur cap regulation in bunker fuel is anticipated to reduce the marine pollution, which led to increase in demand for bunker fuel among the shipping companies. According to some CXOs, with increase in oil & gas exploration activities, the bunker fuel market is expected to grow in emerging oil-producing regions, especially in the Indo-Pacific.

New oil-producing regions have vast unexplored reserves, which are enough to meet the growing energy demand in future. Exploration of these untapped reserves affect the demand for shipping vessels, as increase in exploration, drilling, and production of oil & gas require more shipping vessels to transport oil & gas to desired destinations, which boost the growth of the bunker fuel market.

Regardless, the narrower VLSFO-HSFO differential and overall lack of a supply crunch for low-sulfur bunker fuel is not likely to change anytime soon. Refinery throughput and global demand for bunker fuel  were negatively affected by COVID-19.

The impact of IMO specifications change on reducing of sulfur cap that depend on the different strategies adopted by the ship owners. There are three main options for ship owners:

•        Purchasing compliant bunker fuel without making any changes in the vessel.

•      Installation of exhaust cleaning systems on board, known as scrubbers. These scrubbers will remove sulfur dioxide emissions from the exhaust and allow the ship owners to continue burning high sulfur bunker.

•        Switching to alternative fuel such as liquified natural gas (LNG) by making modifications in the vessel.

The first option will increase the demand of low sulfur content fuel. The second option would be less disruptive for refining industry but comes up with the high initial investment for vessel owner. Third option reduces the demand for both fuel oil and gas oil. Overall IMO specification change is expected to erode high sulfur fuel consumption and is expected to increase for various types of low sulfur bunker fuels.

In addition, increase in hydrocarbon exploration activities in Asia-Pacific and rise in sea  trade are expected to drive the growth of the bunker fuel market in future. However, fuel reduction initiative t by shipping companies restrains the growth of the bunker fuel market. Due to stringent government regulations, shipping companies decided to reduce usage of bunker fuel such as residual fuel oil (RFO). They focus toward the adoption of alternative fuels such as LNG (Liquified Natural Gas), biodiesel, and kerosene. LNG is expected to be put in newly build vessels particularly to those that operate within a geographic area particularly emission control area (ECA). Currently, infrastructure needed for LNG bunkering is limited and need to rapidly expand if LNG bunker are to become common for the largest consumers. Among the analyzed geographical regions, Asia-Pacific is expected to account for the highest revenue in the market throughout the forecast period, followed by North America, Europe, and LAMEA.

Q1. What are the key growth strategies of global bunker fuel market players?

Q2. Who are the potential customers of bunker fuel industry?

Q3. How can I get report sample of Bunker Fuel Market?

A. To get latest version of bunker fuel Market report can be obtained on demand from the website.

Q4. Which is the largest regional market for Bunker Fuel?

A. Asia-Pacific is the largest market for bunker fuel during the forecast period.

Q5. What is the leading application of Bunker Fuel Market?

A. Applications such as container, bulk carrier, general cargo, chemical tanker, fishing vessels and gas tankers are expected to drive the adoption of bunker fuel.

Q6. How can I get statistical data of top market players of bunker fuel Market?

A. The top ten market players are selected based on two key attributes - competitive strength and market positioning

Q7. Which are the top companies to hold the market share in Bunker Fuel?

Q8. What are the upcoming trends of Bunker Fuel Market in the world?

A. IMO regulation on the sulfur content in the marine fuel and increase in offshore oil and gas exploration activities are the key factors boosting the bunker fuel market growth.

Q9. What is the estimated industry size of Bunker Fuel?

Q10. Which segment holds the maximum share of the bunker fuel market?