The global command; control; computers; communications; combat; and intelligence, surveillance, & reconnaissance (C5ISR) market is expected to witness significant growth due to increase in use of unmanned platforms, rise in demand for situational awareness in military and civil operations, continuous growth in commercial wireless networks, and rise in demand for software-defined radio (SDR) in military communication systems.

The COVID-19 impact on the C5ISR industry is unpredictable, and is expected to remain in force for a few years. The COVID-19 outbreak forced governments across the globe to implement stringent lockdowns and ban the import–export of raw material items for most of 2020 and few months in 2021. This led to sudden fall in the availability of important components for manufacturing C5ISR components. Moreover, nationwide lockdown forced C5ISR manufacturing facilities to partially or completely cease their operations. Adverse impacts of the COVID-19 pandemic have resulted in delays in activities and initiatives regarding development of advanced C5ISR across the globe. 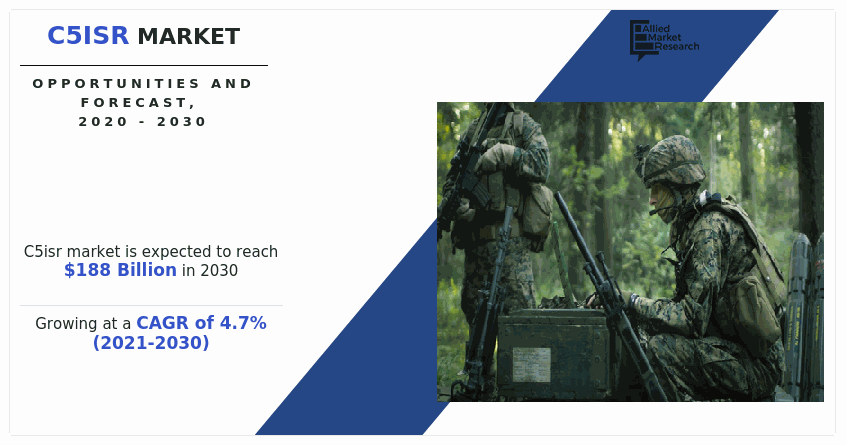 C5ISR is an acronym that stands for command; control; computers; communications; combat; and intelligence, surveillance, & reconnaissance. According to the U.S. Army, C5ISR is a technology designed to allow information dominance and decisive lethality for networked soldiers. Radios, night vision, workstations, smartphones, and electronic sensors are a few examples of the technology. It employs technology such as command and control (C2) systems, software-defined radios (SDRs), and satellites. It assists decision-makers to make critical decisions more accurately and effectively during wars. Moreover, emerging and developing countries are expected to expand their demand for network communications, national command & control (C2), sensor improvements, space capabilities, intelligence, and electronic warfare systems.

The major factors driving the C5ISR market growth include increase in use of unmanned platforms, rise in need for integrated solutions, surge in global terrorism, and rise in security concerns due to territorial conflicts. Unmanned platform is an integral part of the system, which includes the command, control, and communication (C3) systems. It has various uses in recent military applications such as search & rescue, real-time surveillance, reconnaissance operations, traffic monitoring, and hazardous site inspection. However, - high costs of designing and developing intelligence, surveillance, & reconnaissance (ISR) systems are hampering the growth of the market. On the contrary, increase in defense expenditure by major economies is expected to create new market opportunities in near future.

Intelligence is projected as the most lucrative segments

The C5ISR market is segmented on the basis of type, application, and region. By type, the global has been categorized into land, naval, and airborne. By application, the market has been classified into command; control; communications; computers; combat; and intelligence, surveillance & reconnaissance. The market is analyzed based on four regions, namely North America, Europe, Asia-Pacific, and LAMEA.

Rise in Need for Integrated Solutions

The U.S. Army issued a proposal to the industry seeking a highly versatile ground combat vehicle (GCV) as a part of the modernization efforts to provide its armed forces with a next-generation infantry-fighting vehicle. Army officials are in the process of standardizing the information technology architecture with almost all the current and future ground combat vehicles (GCVs). The aim is to minimize the weight and power of electronics, lower life-cycle costs, and increase interoperability while still supplying combat warriors with all of the data and communication capability required on the battlefield. For instance, in May 2021, the U.S. Army ordered an advanced ground robot FLIR Centaur, including additional spares, antennas, and payload mounting kits from Teledyne FLIR LLC.

The current GCV is outfitted with a modern C4ISR system, culminating in a fully integrated C5ISR system. Due to its open architecture and infrastructure, GCV is easily extensible to various present and future C5ISR systems. The vehicle's inbuilt electronic network capacity allows the crew to communicate with other battlefield units. The electronic network can be upgraded to accommodate future network topologies. The vehicle's four-channel ground mobile radio (GMR) permits communication and data transfers between ground vehicle platforms on the move. However, technological equipment takes up a lot of room, weighing down vehicles, and draining power. As a result, the introduction of these proactive systems is projected to contribute in the C5ISR market growth during the forecast period.

Growing Security Concerns due to Territorial Conflicts and Global Terrorism

Territorial conflicts have historically been the major reason for wars, particularly when two governments disagree over specific bits of land. The causes of these kinds of conflicts include a mix of economic and political concerns, normative concerns, and competition for scarce natural resources. Moreover, in recent years, terrorist attacks increased drastically due to increase in power of terrorists. For instance, in January 2021, a deadly twin suicide attack had hit central Baghdad. In addition, according to the U.S. Department of Homeland Security and the National Consortium for the Study of Terrorism and Responses to Terrorism, a total of 8,302 terrorist attacks occurred worldwide in 2019, resulting in 25,082 deaths and 19,924 injuries. Increase in attacks leads to rise in C5ISR-enabled systems acquisitions and procurement by major economies, thus boosting the demand growth for the C5ISR market. Additionally, increase in security concern among countries due to rise in territorial conflicts is expected to increase demand for C5ISR systems across the globe.

Moreover, security attacks are the key reasons for an increase in demand for C5ISR by defense forces. In addition, as the global C5ISR market grows, innovation and evolution in the technological approach provide the power to confront terrorists more effectively and efficiently.

Airborne is projected as the most lucrative segments

C5ISR is extremely useful in conflict situations as it provides situational awareness for timely and prudent decision-making. ISR is commonly utilized in military applications. It is an integrated intelligence and operational role that is defined as coordinated collection, processing, and dissemination of accurate, relevant, and timely information & intelligence to assist the commander's decision-making process. Majority of the land, sea, air, and space installments play a vital role in ISR acquisition to assure operational success. The development, deployment, and maintenance of such systems are costly. Thus, this factor restraints the growth of the market.

Moreover, in the military, unmanned operations in the military are on rise. This necessitates an upgraded communication system with better integration of the defense system, which the ISR system readily provides. However, high initial costs associated with the designing, developing, and installing ISR systems are anticipated to hamper the growth of the market.

Governments of countries such as Russia, the U.S., China, and India are increasing investment in armed forces to establish dominance on battlefield. According to the Stockholm International Peace Research Institute (SIPRI), total global military expenditure rose to $1981 billion in 2020, a 2.6 % increase from 2019. In addition, rise in terrorist activities and civil activities in several regions of the world and surge in international conflicts tend to encourage countries to enhance their military strengths through advancements in technologies, such factors increase demand for adoption of C5ISR.

Moreover, governments in both developed and developing countries, such as India, China, Russia, and the U.S., are investing significantly in military modernization programs to improve their command & control, communications, and combat systems and to maintain intelligence & surveillance capabilities. For instance, in January 2022, the U.S. Navy signed a five-year contract with BAE System for lifecycle management and sustainment of the U.S. Navy’s C5ISR systems. In January 2022, the U.S. Army Communications Electronics Command (CECOM) signed a $518 million contract with General Dynamics Information Technology (GDIT), a business unit of General Dynamics Corporation for logistics, sustainment, and maintenance services. These activities are expected to create opportunities for the C5ISR market during the forecast period.

Furthermore, numerous developments have been carried out by key players operating in the industry, which are expected to create remunerative opportunities for the expansion of market during forecast period. For instance, in March 2022, Elbit Systems Ltd. signed an agreement with the Canadian Department of National Defense to provide a TORCH-X based solution as part of the airspace coordination center modernization (ASCCM) project. In addition, in January 2022, BAE Systems signed a five-year contract with the U.S. Navy to provide lifecycle management and sustainment of the U.S. Navy’s C5ISR systems

Q1. What is the estimated industry size of C5ISR?

Q2. What are the upcoming trends of C5ISR Market in the world?

A. Rise in demand for situational awareness; use of cutting-edge artificial intelligence and cloud technologies

Q3. Which is the largest regional market for C5ISR?

A. North America is the largest regional market for C5ISR market

Q4. What is the leading application of C5ISR Market?

A. Surveillance and reconnaissance is the leading application of C5ISR market

Q5. Which are the top companies to hold the market share in C5ISR?