A commercial aircraft is a type of plane that transports people or cargo from one area to another. It is utilized in commercial aircraft, which encompasses both general aviation and scheduled airline services. Power plant, wings, fuselage, tail or empennage, and undercarriage or landing gear are the major components of a commercial aircraft. Tourism, passenger travel, business travel, and freight transportation for a variety of industries, including consumer electronics, government, and food are all possible with commercial aircraft. Commercial aircraft are an important part of the global aviation system that help to generate long-term improvements in economic, social, and environmental efficiency.

Fleet development of the aircraft, increase in demand for fuel-efficient aircraft, unremitting advancements in aviation technology, including the use of lightweight carbon composites for manufacturing aircraft, and growth in the number of airline passengers fuel the demand for commercial aircrafts. However, lack of security & increased terrorism and congestion & delay in air traffic are factors that hinder the growth of the commercial aircraft market. Furthermore, various environmental regulations affect the market, owing to heavy emission of carbon dioxide (CO2) and other gases in the atmosphere by an aircraft.

Cargo is projected as the most lucrative segment

On the contrary, government initiatives to promote the commercial aircraft market and expansion of airports in developing countries, including Africa, China, India, and Singapore are projected to provide lucrative opportunities for prominent market players.

The commercial aircraft market is segmented on the basis of size, application, and region. Depending on size, it is categorized into narrow body, wide body, regional & business jet, and freighter. As per the application, the market is bifurcated into passenger and cargo. Region wise, it is analyzed across North America, Europe, Asia-Pacific, and LAMEA.

Increase in number of air passengers

Air traffic is anticipated to grow at a significant rate in the future, which is projected to increase the demand for commercial aircraft across the globe, owing to increase in air traffic, improvement in air network, reduction in fuel prices, and surge in traveling frequencies through the air. For instance, according to the Civil Aircraft Market Forecast Report (2019-2038) of Commercial Aircraft Corporation of China, Ltd. (COMAC) presented at the Aviation Expo/China 2019, global Revenue Passenger Kilometers (RPK) will increase at an average annual rate of 4.3% over the next 20 years, and is anticipated that 45,459 new aircraft valued for about 6.6 trillion USD (based on the list price of the aircraft in 2018) will be delivered for the use in replacement and development of fleets.

According to the International Civil Aviation Organization (ICAO), by 2035, passenger traffic and freight volume should increase. Factors such as growth in disposal income of the middle-class population and emergence of low-cost airlines led to an increase in number of airline passengers. In addition, as the number of airline passengers rises, demand for commercial aircraft services increase at a significant rate. The major countries such as Canada, the U.S., Brazil, Indonesia, Philippines, China, Saudi Arabia, and India witness a rise in number of air passengers. For instance, according to the Bureau of transportation, in October 2021, the U.S. Airlines passengers increased by 119% from October 2020. According to the International Air Transport Association (IATA), passenger numbers could rise to 8.2 billion in 2037 at 3.5% compound annual growth rate (CAGR).

According to the International Council on Clean Transportation (ICCT), air travel produces about 3% of global carbon dioxide emissions. However, commercial aircraft are environmental-friendly and have a low impact on the environment in terms of noise annoyance and carbon emission. This has led to a rise in its popularity as one of the best means of transportation across the globe. Continuous advancement in aircraft manufacturing technology and air traffic management is anticipated to reduce carbon emission and improve fuel saving. For instance, presently, aircraft are capable of producing 20 decibels (dB) less noise, which reduces noise annoyance up to 75% and are 70% more fuel-efficient. Carbon monoxide emissions have been reduced by 50%, while unburned hydrocarbon by 90%. These all factors are projected to boost the market growth.

Moreover, several airlines have stated plans to become environmental-friendly in the future. For instance, the United Airlines announced to become carbon neutral by 2050, JetBlue committed to get there by 2040, and Delta Airlines announced $1 billion commitment to become carbon neutral by 2030. In addition, contribution of market players in designing & developing environment-friendly and fuel-efficient aircraft propels the growth of the market. For instance, Pratt is working to produce the PurePower geared turbofan engine, a product line developed to provide more eco-conscious solutions for the airline industry.

Congestion and Delay in Air Traffic

With each passing year, air travel becomes increasingly congested. According to statistics, the number of scheduled passengers in 2019 reached almost 4.6 billion, which is nearly 130% more compared to 2004. In addition, in 2019 the FAA's (Federal Aviation Administration) Air Traffic Organization (ATO) serves over 45,000 flights and 2.9 million airline passengers every day across more than 29 million square miles of airspace. According to the Air Traffic Organization (ATO), Federal Aviation Administration (FAA) handles 16,405,000 flights, and witnesses more than 10,000,000 scheduled passenger flights yearly.

Congestion and delay in air traffic is the major issue affecting overall commercial aircraft market growth. When demand for airports or airspace exceeds available capacity, there is delay in air traffic. As a result, these delays can be mitigated by expanding capacity or altering air traffic demand. Increase in capacity is the solution, however, it is a long-term process that will require big adjustments such as facility development, basic process modifications, and navigational equipment improvements. Key aviation services providers are inclined toward improving air traffic controls and enhancing travel routes to overcome the problem associated with congestion and delay.

The emerging countries such as China and India are anticipated to create new growth opportunities for prominent players operating in the market. For instance, in September 2019, according to the Commercial Aircraft Corporation of China, Ltd., Chinese market was projected to witness a strong demand for commercial aircraft over the next 20 years. In addition, according to its market forecast report (2018-2037), 9,008 passenger aircraft valued at approximately $0.16 trillion (¥9 trillion) are estimated to be delivered. In addition, according to the Commercial Aircraft Corporation of China, Ltd. (COMAC) Market Forecast Report (2018-2037), Asia-Pacific, including China has the fastest-growing market, and its share in global aircraft fleet will increase from 31% to 41% by 2037. The proportion of Chinese market accounted for the global passenger aircraft fleet is estimated to increase from the 16% to 21% by 2037.

Furthermore, in December 2018, according to Boeing's long-term projection for commercial airplanes, in India, extraordinary domestic passenger traffic and rapidly expanding low-cost carriers (LCCs) will drive the requirement of 2,300 new jets valued at $320 billion over the next 20 years.

Moreover, air transport is expected to increase in emerging markets, owing to rise in per capita income and standards of living. According to the report published in December 2018 by the Boeing Company and Civil Aviation Administration of China (CAAC), domestic passenger traffic in China is estimated to grow by 12% annually. Furthermore, Southeast Asia require fleet of 7,210 by 2034, among which maximum demand is anticipated for narrow-body aircraft 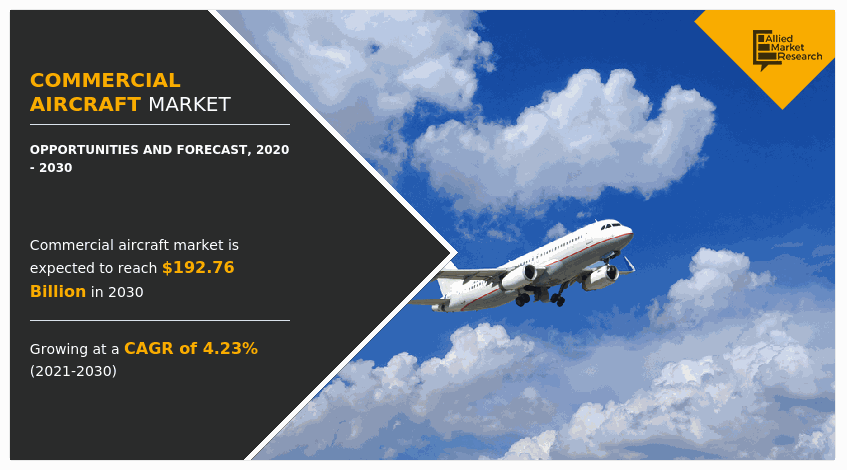 Moreover, numerous developments are carried out by key players operating in industry, which are expected to create lucrative opportunities for expansion of market during the forecast period. For instance, in December 2021, Airbus launched the new website called as Airbus Aircraft for all commercial aircraft products and services to create a customer-centric environment where airlines, maintenance, repair, & overhaul (MROs), and lessors can get an end-to-end view of aircraft and portfolio of services during entire aircraft life cycle. In addition, in May 2021, Dassault Aviation launched FALCON 10X, featuring the industry’s largest cabin and most advanced technology on a business jet.

Furthermore, commercial aircraft are expected to show notable growth during the forecast period, especially in Asia-Pacific, owing to population growth, supportive government initiatives, and rise in domestic income. For instance, according to the Commercial Aircraft Corporation of China, Ltd. (COMAC) market forecast report presented during the 12th China International Aviation & Aerospace Exhibition, the global Revenue Passenger Kilometers (RPK) will increase at an average annual rate of 4.46% over next 20 years based on average growth rate of global economy of about 2.9%, and more than 42,702 new aircraft valued about $6 trillion will be delivered globally to replace retired aircraft and support development of the fleet. In addition, narrow-body or single-aisle commercial aircraft are expected to be in huge demand, owing to their eco-friendly design and efficiency in short-haul travel.

The commercial aircraft market is segmented on the basis of aircraft size, engine type, use case, and region. By aircraft size, it is categorized into wide-body, narrow-body, and regional jets. Depending on engine type, it is classified into turboprop and turbofan. According to the use case, it is bifurcated into the government sector and private sector. Region wise, it is analyzed across North America, Europe, Asia-Pacific, and LAMEA

Q1. What are the upcoming trends of Commercial Aircraft Market in the world?

A. Rise in usage of digital technology to provide enhanced safety and efficiency for commercial aircraft; Advent of fuel-efficient aircraft that consume lesser fuel and offer double digit savings in maintenance costs

Q2. What is the leading application of Commercial Aircraft Market?

A. Commercial aircraft are widely used for passenger application

Q3. Which is the largest regional market for Commercial Aircraft?

A. Asia-Pacific is the largest market for Commercial Aircraft

Q4. What is the estimated industry size of Commercial Aircraft?

Q5. Which are the top companies to hold the market share in Commercial Aircraft?