The early toxicity testing market accounted for $739 million in 2017, and is expected to reach $1,301 million by 2025, registering a CAGR of 7.3% from 2018 to 2025.Toxicity is the degree of threat posed by a substance to the living organism. The effects of chemical substance on the body are studied to choose a potential drug candidate during the development of newer molecules. Early toxicity testing is carried out at pre-clinical stages of a drug development process and is essential as toxicity serves as the major reason for the failure of potential drug candidates in the later stages of drug development leading to huge financial loss to companies. Well designed and executed preclinical studies are critical to the success of any drug development program. Therefore, they must reliably assess the safety of a new drug entity, laying the groundwork for clinical trials and ultimately, regulatory approval. Moreover, these tests are necessary as they can prevent financial losses that occur during the failure of drugs in further late stages of drug development. 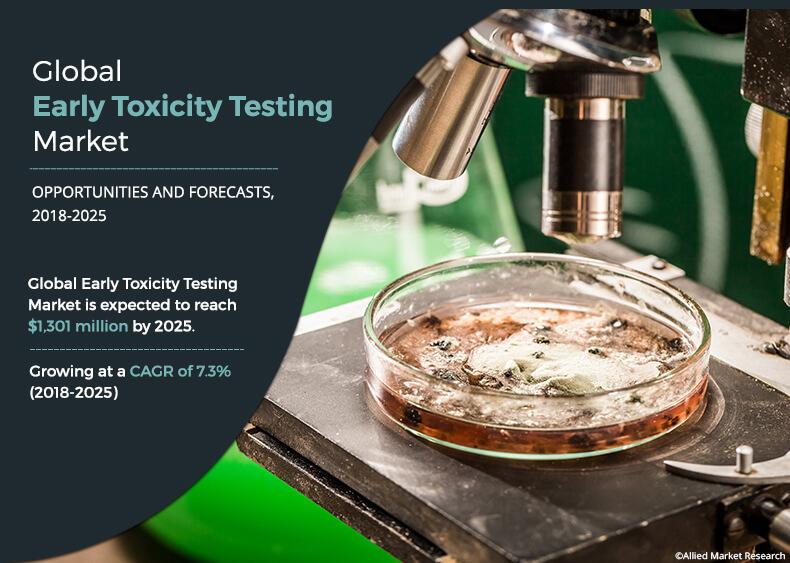 Based on technique, the market is divided into in vivo, in vitro, and in silico. The in vitro segment was the largest contributor to the early toxicity testing market in 2017 and is expected to maintain its dominant position throughout the analysis period. In vitro toxicity methods use different laboratory techniques and cell lines to assess the possible adverse effects of different drugs and chemicals on the human health. Cost-effective nature of this technique, technological advancement, and stringent regulation for animal usage during diagnostic procedures majorly drive the growth of the early toxicity testing market growth. On the other side, the in silico segment is the fastest growing segment during the forecast period, owing to the rise in its adoption due to advantages offered by the technique. In silico techniques have revolutionized the drug discovery process as these techniques are not only applied to find the new targets and new molecule with high affinity to those targets but also used to determine the metabolic pathways of those active molecules. In addition, these techniques are computer-based that eliminate animal sacrifice, which is another factor that contributes toward the early toxicity testing market growth.

According to the early toxicity testing market analysis, the end users segment is classified into pharmaceutical industry, food industry, chemicals industry, cosmetics industry, and other industries. The pharmaceutical segment occupied the highest share of early toxicity testing market size in the year 2017. Cosmetic industry segment registered fastest growth rate during forecast period, owing to rise in aesthetic consciousness, surge in disposable income of general public across the globe, increase in new product launches in the field of cosmetics and stringent government guidelines monitoring the nature of chemicals used in cosmetic products. 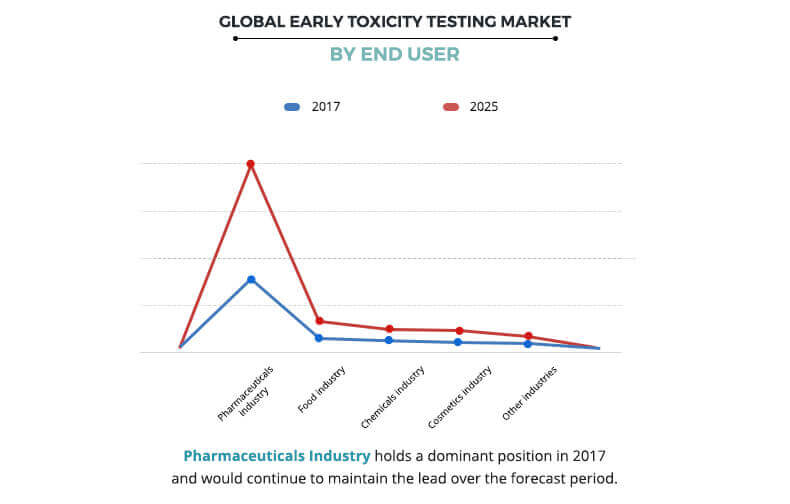 Region wise, Europe accounted for the largest early toxicity testing market share in 2017 owing to surge in R&D related to drug discovery and stringent guidelines regulating the safety of chemicals used in different products used by public. Other factors that fuel the growth of the market in this region include the wide and easy availability of toxicity testing devices and products and presence of highly trained technical professionals. Asia-Pacific is expected to register the fastest growth during the forecast period due to rise in awareness related to toxicity of compounds and rise in R&D investments related to healthcare. 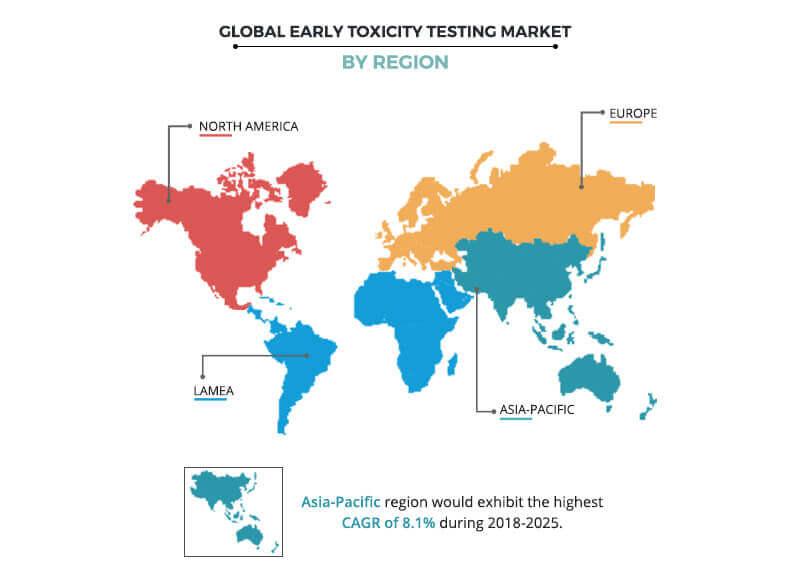 Early toxicity testing is the analysis of chemical entities in the pre-clinical phases to check their compatibility for the clinical trial to be performed in humans. In accordance to several interviews conducted, the adoption of early toxicity testing across the globe is expected to witness significant growth with rise in research conducted toward the development of new drugs. In addition, the early toxicity testing gains traction due to high number of drug failures in the later stages of drug testing. These stages are very expensive to perform and later the failure causes even more financial loss of the company. Moreover, there have been remarkable technological advancements to improve the process of drug development. The increase in stringent regulations concerning public welfare and replacement of in vivo models by in vitro models are some the factors that boost the growth of the early toxicity testing market.

In addition, surge in healthcare investments worldwide is another major factor that drives the market growth. However, limitations of preclinical testing are expected to restrain the market growth. A rapid advancement in in silico platforms serves as an opportunity to early toxicity testing market. Europe garnered the largest share of this market due to rise in research activities related to drug development, and stringent regulations governing the safety associated with products, while Asia-Pacific is expected to grow at the fastest pace, owing to surge in healthcare investments in the country.