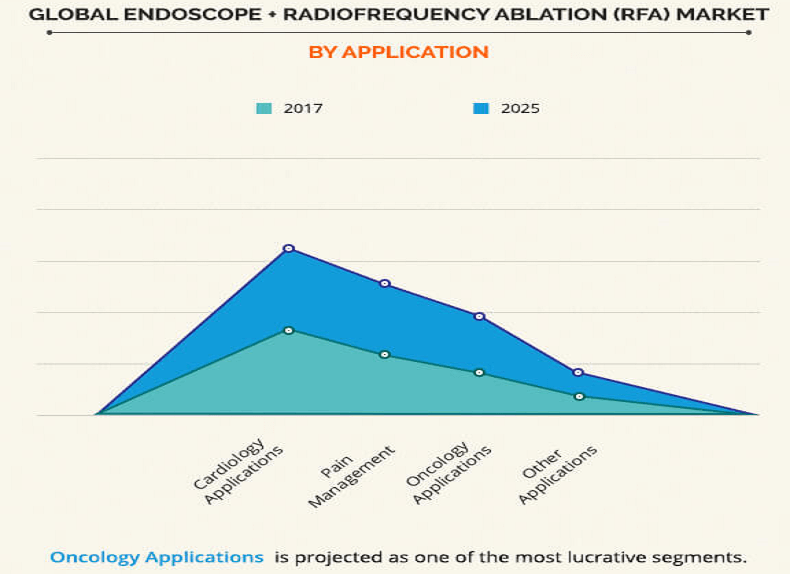 Based on application, the endoscope + radiofrequency ablation (RFA) market is classified into four segments—oncology application, pain management, cardiology application, and other applications. The cardiology application segment registered the highest revenue in 2017 and is expected to maintain this trend throughout the forecast period. The dominant position of this segment in the global market is majorly contributed by the increase in the patient pool suffering from arrhythmia. Whereas, the oncology application segment is expected to record the highest CAGR from 2018 to 2025. Radiofrequency ablation (RFA) is a safe, minimally invasive, and an effective modality for the destruction of tumors. In addition, RFA is largely used for the ablation of liver cancer and serves as a practical alternative in inoperable patients. 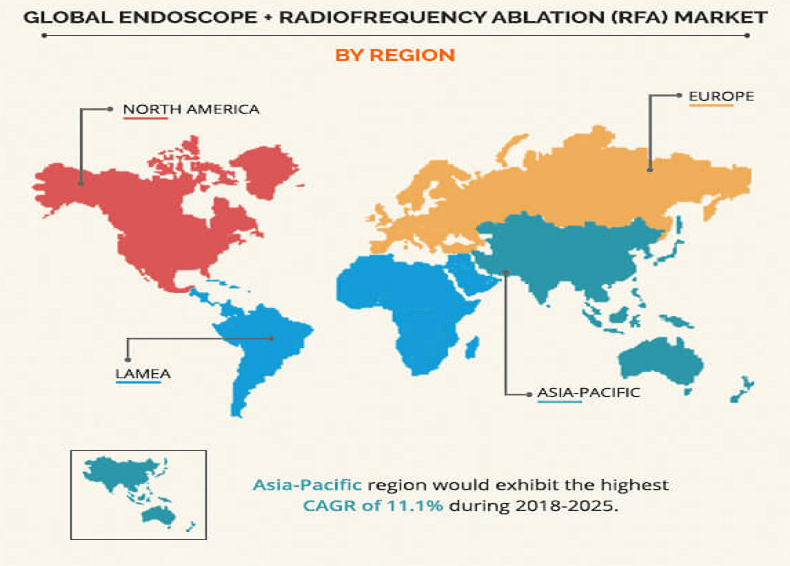 Region-wise, the endoscope + radiofrequency ablation (RFA) market is analyzed across North America, Europe, Asia-Pacific, and LAMEA. North America dominated the market in 2017, accounting for the highest share, and is anticipated to maintain this trend throughout the forecast period. North America is an established market for radiofrequency device ablation technologies, wherein adoption of the newest RFA devices is at its earliest. However, the Asia-Pacific region is projected to register the highest growth rate from 2018 to 2025. China and India have undergone rapid economic progress, and the healthcare industry in these two aforementioned countries witness continuous evolution. This has led several market players to invest in the emerging countries.

Radiofrequency ablation (RFA) is a well-validated treatment for the patients suffering from dysplastic Barrett's esophagus other than medical indications associated with cardiology, oncology, and pain management. However, new emerging indications wherein the use of endoscopic RFA devices is being evaluated are set to offer significant opportunities for the expansion of the key market players. Acquisition is the key business strategy that has been predominantly adopted by the market players including Boston Scientific Corporation and Stryker Corporation. Acquisitions help to cater to new customers and thus expand the geographical presence of the company.

The growth of the global endoscope + RFA market is fueled by increase in demand for novel alternatives for the treatment of cancer, cardiac disorders, and pain management across the globe. In addition, rise in the number of research activities carried out to explore the potential of endoscopic RFA in the treatment of chronic diseases is expected to propel the market growth. Use of endoscope + RFA modality is the highest in North America, owing to easy accessibility of these advanced devices, early adoption of latest minimally invasive surgical techniques, and rise in expenditure by the government on healthcare, followed by Europe and Asia-Pacific. In addition, RFA device manufacturing companies have focused on expanding their presence in the emerging economies, which is anticipated to drive the market growth in Asia-Pacific.