Get detailed COVID-19 impact analysis on the Europe Nanomaterials Market

The Europe Nanomaterial Market generated revenue of $2,536 million in 2015 and is expected to reach $9,078 million by 2022 with a CAGR of 20.0% during 2016-2022. Nanomaterials can be defined as the materials with at least one external dimension in the size range of approximately 1 to 100 nanometers. The report focuses on current market trends and future growth opportunities of nanomaterials, in industries such as paints & coatings, adhesives & sealants, healthcare, energy, electronics & consumer goods, personal care, and others. It also emphasizes the various types of nanomaterials that are commercially available in the market, namely, carbon based (carbon nanotubes, fullerenes & POSS, and graphene), metal and non-metal oxides (titanium dioxide, zinc oxide, silicon dioxide, aluminum oxide, cerium oxide, antimony tin oxide, copper oxide, bismuth oxide, cobalt oxide, iron oxide, magnesium oxide, manganese oxide, and zirconium oxide), metals (silver, gold, nickel, and quantum dots), dendrimers, nanoclay, and nanocellulose. It also analyzes the current market trends of nanomaterials in different countries in Europe and suggests the future growth opportunities by analyzing government regulations & policies, which can further increase the consumer acceptance in that region.

Key players in the Europe nanomaterials market have adopted different business strategies such as capacity and business expansion, partnerships, mergers, acquisitions, and product & application development to survive in the global competitive market. The market players profiled in this report are nanomaterials manufacturers who either use it internally in some applications, or supply it to other end-users in the industry. The data pertaining to market players and their strategic moves are gathered through press releases of the respective companies, various blogs available on their websites, and primary calls made to the experts in the industry. 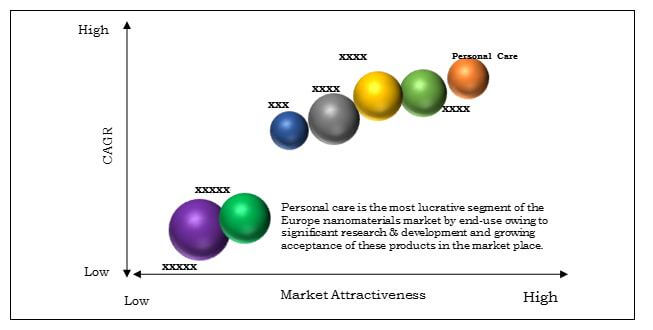 In the aerospace industry, aircraft manufacturers are striving towards making aerospace parts stronger, tougher, and long-lasting. Recent research has revealed that nano-enabled products in aircrafts can increase fatigue life by 200 to 300%. Components fabricated with carbon nanotubes reinforced polymers can deliver improved mechanical, electrical, and thermal properties. Similarly, polymer-silicate nanocomposites can be used in fuel storage tanks. Increased commercial application of nanomaterials in the aerospace industry will provide significant opportunity to the material suppliers and part fabricators.

Engineered nanomaterials are rapidly gaining wide acceptance in the form of cosmetics, food packaging, drug delivery systems, therapeutics, biosensors, and others. The worldwide production of nanomaterials has crossed the mark of 3.5 million tons and is expected to increase significantly in the coming years. Anything can be toxic at a higher dose, but the more important aspect is how toxic these nanomaterials are at the potential concentration at which they are used. It has been found that exposure to high levels of silvers over a long period of time can result in argyria; a condition in which the skin and other organs get decolorized to a bluish-gray color. However, to study the toxicity in and impact of nanomaterials on humans and the environment requires proper gathering of data and their analysis.

Nanomaterials are used in applications such as solar cells, li-ion batteries, supercapacitors, and hydrogen storage systems due to their huge surface to volume ratio, favorable transport properties, altered physical properties, and confinement effects. The benefits that nanomaterials deliver in energy storage include:

Europe is one of the prominent regions in terms of usage of nanomaterials and is forecast to have significant growth in demand during the forecast period. The decreasing prices of nanomaterials due to increasing mass production are responsible for the robust growth of the market.