Get detailed COVID-19 impact analysis on the Fuel Ethanol Market

COVID-19 has severely impacted the global economy with devastating effects on global trade, which has simultaneously affected households, business, financial institution, industrial establishments and infrastructure companies. The shutdown of industrial manufacturer led to the decline in the demand for vehicles for transportation and the shutdown of transportation sector in most of the countries across the world led to decline in the demand of the fuel ethanol market. 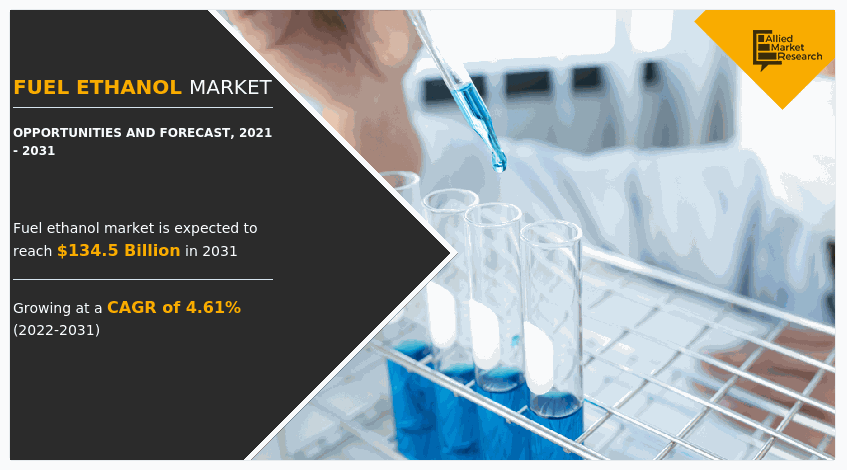 The fuel ethanol market is segmented into Source, Product, Application and End Use Industry.

Fuel ethanol is ethyl alcohol that is used as fuel. It is most often used as motor fuel, mainly as a biofuel additive for gasoline. It is commonly made from biomass such as corn or sugarcane. Ethanol blended fuel is widely used in Brazil, the U.S., and Europe. Fuel ethanol is manufactured from two sources one natural biomass, and synthetic source. Natural source ethanol is a form of renewable energy that can be produced from agricultural feedstock. It can be made from very common crops such as sugarcane, potato, cassava, and corn. In synthetic situation, it is produced from the petrochemical industries using fossil fuel as raw material. Currently 93% of ethanol fuel is produced form natural source, while 3% from the synthetic source.

The presence of investments in the past decade and recent emergence of the importance regarding the impact of transportation sector on the environment, and increasing policies of major developing countries to make progress towards climate goals for 2030 are some of the essential factors driving the market growth during the forecast period. Furthermore, the restrictions of the insufficient presence of feedstock, less efficiency conversion of biomass, and the presence of less number of refineries have hampered the market. The rapid innovation and investment of new entrants to develop alternative processing method for ethanol fuel and the presence of very few refineries to meet the on-going demand for ethanol fuel is a negative impact on the development of the market.

The increase in investment of major oil manufacturers in the procurement of fuel ethanol from the fuel ethanol producers to improve the gasoline octane content, to reduce the production of carbon soot and to fallow the government regulations to reduce the carbon emission are major factors driving the growth of the market.

Increase in technology to extract the ethanol fuel from non-food crops with economical cost, the government policies and initiatives to support the green industries, which can provide extra income to the farmers and also reduce the carbon emission during improper handling of the agricultural waste. In addition to the presence of global fuel giants such as Shell, Hindustan Petroleum Corporation Limited has reached various partnership, collaboration, and acquisition in regards with the biofuel related companies in order to commercialize the biofuel, will create opportunities for the growth of the fuel ethanol market.

The fuel ethanol market industry is segmented on the basis of source, product, application, end use industry and region.

The natural source segment dominates the global fuel ethanol market share. Natural source for ethanol is fermentation of biomass; in 2020, 93% of global ethanol is produced through natural biomass. Most of the fuel ethanol produced around the world is made by fermenting the sugar in the starches of grains such as corn, sorghum, and barley, and the sugar in sugar cane and sugar beets. In this method, denaturants are added to ethanol to make fuel ethanol. Sugarcane and corn have been used as the major feedstock for ethanol production. Lignocellulosic biomass has recently been considered as another potential feedstock due to its non-food competing status and its availability in very large quantities. Furthermore, at present natural source ethanol is one of the most important biofuels in the current economy as it is contributing 65% of the total biofuels production. The presence of above mentioned factors will provide ample opportunities for the development of the market.

Starch Based segment to dominate the market till 2031

The starch based dominates the global fuel ethanol market. Starch-based materials used in the production of ethanol are corn, wheat, rice and cassava. The raw materials type is dependent on the agricultural production potential on the production areas; for instance corn is commonly used in Americas, while Rice and cassava are commonly used in Asia. Starch-based raw materials first go through hydrolysis process in which amylolytic enzymes are used to convert starch to glucose. The glucose is fermented with the presence of yeast to produce ethanol and carbon dioxide. Industrialization and increasing world population demand high energy consumption. The source for most of our energy is petroleum; in anticipation of its eventual exhaustion a great deal of effort has gone into production of renewable energy sources including biofuels such as bioethanol. Bio ethanol is used most often as a liquid fuel in transportation. It has potential uses in industrial processes and heating. The presence of advantages compared to conventional liquid fuels and helps in the reduction of carbon emission by 80% and a perfect substitution for gasoline. The presence of above mentioned advantages will drive the fuel ethanol market forecast growth.

Automotive segment to dominate the market till 2031

The automotive segment dominates the global fuel ethanol market. In automotive industry fuel ethanol is a fuel that is used to provide power to the engine in fuel vehicles. Currently, the majority of automobiles worldwide are powered by gasoline or diesel. Ethanol is a renewable and can be produced domestically for transportation purpose which can be used in low-level blends such as E10 (10% ethanol, 90% gasoline), E15 (10.5% to 15% ethanol), or E85 (flex fuel) a gasoline-ethanol bled containing 51% to 83% ethanol depending on regulations of the country or organization. The increasing utilization of automotive in the transportation industry across the developed and developing countries have positive impact on the demand for the fuel ethanol market. The gradual exhaustion of the fossil fuel which are used in the automotive and increasing the cost price of the crude oil have augmented the utilization of fuel ethanol in the automotive. The above mentioned factors will provide ample opportunities for the development of the market.

North America is expected to possess highest market share till 2031

North America occupies the largest part of the fuel ethanol market and consists of countries such as U.S, Canada, and Mexico. The U.S. is the world’s largest producer of ethanol, having produced over 13.9 billion gallons in 2020. In 2020, Canada exported ethanol used as fuel for the first time to Europe. Canada ethanol plants produced 1.7 billion liters in 2020 and fuel ethanol consumption was about 2.7 billion liters. Canada production of fuel ethanol has fulfilled about 61 percent of domestic demand for the past eight years with U.S. ethanol fulfilling the remaining requirements. The increasing expansion of the commercial automotive vehicles and the presence of road transportation infrastructure in the developed countries led to surge in the carbon emissions. The high authorities and government bodies such as Environment Protection Agency, Department of Energy, Department of Transportation, and U.S. Department of Agriculture has jointly funded and supported the development of the production of biofuels (natural ethanol) as an alternative for the fossil fuels. The above mentioned initiatives are major factor driving the growth of the market in this region during the forecast period.

COVID-19 has severely impacted the global economy with devastating effects on global trade, which has simultaneously affected households, business, financial institution, industrial establishments and infrastructure companies. The novel coronavirus has affected several economies ad caused lockdown in many countries which has limited the growth of the market. The shutdown of industrial manufacturer led to the decline in the demand for vehicles for transportation and the shutdown of transportation sector in most of the countries across the world led to decline in the demand of the fuel ethanol market. The decrease in utilization of transportation facilities across the globe during the outbreak has a negative impact on the development of the market.

The global fuel ethanol market is expected to gain traction during the forecast period as a result of government regulations and investments that are aimed at developing potentially underutilized agricultural and other waste resources.

Ethanol fuel is a biofuel used to power automobiles and is said to renewable fuel as these fuel sources comes from food crops, prime agricultural land, and natural forest. These fuels are alternative to the fossil fuel and help in reducing the carbon emission with the application in transportation sector. These fuels are promising alternative for conventional fuel for sustainable development as they can curb 60-70% of CO2 emission caused by fossil fuel in transportation industry.

Increase in greenhouse gas emission and the rapid development of transportation infrastructure, especially in developing nations led to emission of more CO2, which led to environmental degradation. The decline in natural fossil fuel resources and increasing future demand for conventional fuels led to surge in the exploration of alternatives that are beneficial to the environment. In addition to this, awareness among the individuals regarding utilization of ethanol blended fuel on environment has great impact on the demand for fuel ethanol.

The constraints that restrain the commercial production and use of fuel ethanol is mostly due to feedstock barrier, financial barrier as the production is still expensive, existing laws and regulations are immature for biofuels (which include fuel ethanol), infrastructure barrier as specific ethanol production requires new facilities, existing storage and transportation systems are inappropriate.  The above-mentioned barriers are all hampering the development of the fuel ethanol market.

Q1. What are the key factors boosting the Fuel Ethanol Market growth?

A. Extensive use of ethanol as additive in the automobile industry and rise in environmental concerns and depletion of fossil fuel resources are the key factors boosting the Fuel Ethanol Market growth

Q2. Which industry is projected to increase the demand for Fuel Ethanol Market?

A. Automotive industry is projected to increase the demand for Fuel Ethanol Market

Q3. Which end-use industry is expected to drive the adoption of Fuel Ethanol?

A. Automotive industry is expected to drive the adoption of Fuel Ethanol

Q4. What are the most established players of the global Fuel Ethanol Market?

Q5. What segments are covered in Fuel Ethanol Market report?

Q6. What is the Main Driver of Fuel Ethanol Market?

A. Government initiatives and presence of abundant renewable source is the Main Driver of Fuel Ethanol Market