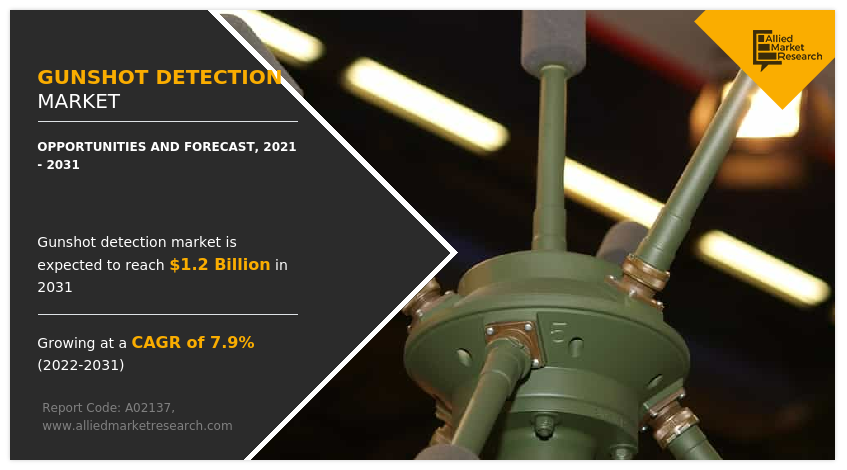 The gunshot detection system market is segmented on the basis of product, application, installation, system, and region. By product, it is bifurcated into indoor and outdoor. By application, it is fragmented into defense, homeland security, and commercial. The commercial segment is further fragmented into corporate enterprise, school & colleges, hospitals, retail stores & venues, and others. By installation, it is classified into fixed system, portable system, and vehicle mounted system. By system, the market is segregated into standalone system and integrated system. By region, the market is categorized by North America, Europe, Asia-Pacific, and LAMEA.

Outdoor is projected as the most lucrative segment.

Surge in adoption of IoT

People are moving toward automation-based solutions and services in the current IT-dominant world. This has led to increased focus on IoT-based devices due to their innovative and advanced applications. IoT is a technology for providing internet or internetworking for almost all applications such as smartphones, microwaves, wearable devices, and buildings. IoT uses electronic software, sensors, and actuators to connect all these things to a shared network. IoT incorporates several sensors such as touch sensor, proximity sensor, and temperature sensor. IoT-based devices help in machine-to-machine (M2M) communication and person-to-computer communication.

Defense is projected as the most lucrative segment.

Rise in incidences of shooting

Gunshot incidents have increased in North American in the past several years, leading to increased demand for gunshot detection systems in the North American area. For instance, in June 2021, according to the Everytown Research organization’s report, between 2009 and 2020, a total of 1,363 people in the U.S. were killed and 97 others injured in 20 mass shootings, an average of 20 shootings per year. These numbers are staggering, as they represent only a fraction of the lives permanently changed after a mass shooting has shaken communities with fear and grief. Moreover, in 2021, the Centers for Disease Control and Prevention organization reported that in 2020, 24,292 individuals committed suicide and gunshots murdered 19,384 individuals. Thus, the increase in number of incidents by gunshot is expected to drive the growth of the gunshot detection market during the forecast period.

In the current scenario, the surge in demand for gunshot detection systems is due to their applications in law enforcement, security agencies, and defense forces. The system detects and analyses the data in real-time and provides it to the police agency. For instance, in June 2020, ShotSpotter, Inc. won a $2.5 million contract from the Sacramento City Council for gun detection technology. This will allow the Sacramento Police Department to continue detecting shootings in three undisclosed locations through 2025. In addition, in February 2022, the California city of Pasadena approved the use of the ShotSpotter system at various locations around the city to analyze sounds and pinpoint the exact location of gunshots. Hence, the increase in usage of these systems is expected to drive the growth of the gunshot detection market during the forecast period.

Portable System is projected as the most lucrative segment.

Gunshot detection systems have high installation and integration cost. The system consists of multiple hardware components such as sensors, power sources, cameras, ethernet data cables, and each detector with power over ethernet (PoE) switches connecting the on-site server. Thus, the installation process demands high labor and material costs. Furthermore, configuration and connectivity issues are significant complications within the existing corporate networks. For instance, in January 2022, Houston City Council adopted gunshot detection technology in the city. The council said it can cost up to $95.000 per square mile. As a result, most cities are hindered by gunshot detection technology due to the requirement of huge investment. Therefore, these factors are projected to hamper the growth of the gunshot detection market during the forecast period.

To improve security, future smart cities should use advanced technology. Gun detection is one of the technologies that has improved emergency preparedness services in the towns across the U.S. These systems provide forensic evidence to law enforcement and security companies to investigate shootings.

Integrated System is projected as the most lucrative segment.

Lockdowns in major countries in North America such as the United States have had a major impact on the defence industry, halting production and delaying product shipments. For example, ShotSpotter, Inc., an acoustic gunshot detection company in California, USA, implemented a mandatory blanket travel ban during the pandemic. The travel ban halted all installation and project management activities. As a result, the installation project scheduled for March and April 2020 were delayed. In addition, due to these travel restrictions, planned assignments at the request of its customers were postponed in response to the pandemic.

Moreover, the increase in adoption of these systems by various law enforcement agencies, especially in the North America, is anticipated to further enhance growth prospects. Further, electronic gunshot detection system and gunshot sound detection system technologies play an important role in improving civilian security services and are being adopted by various cities across the U.S., including Fresno, California, and Peoria, Illinois. For instance, in June 2021, Shooter Detection Systems signed a partnership contract with Singlewire Software, a U.S. based company for enhanced active shooter safety. The integration enables organizations using both systems to automatically broadcast emergency notification to those at risk through multiple means simultaneously.

To fulfill the changing demand scenarios, market participants are concentrating on product launches to offer a diverse range of products and meet new business opportunities. In addition, market participants are continuously focusing on contracts & partnership efforts to match changing end-user requirements and improve the growth of the gunshot detection system market.

Q1. Which are the top companies to hold the market share in gunshot detection?

Q2. What is the estimated industry size of gunshot detection?

Q3. Which is the largest regional market for gunshot detection?

A. North America is the largest regional market for gunshot detection market.

Q4. What is the leading application of gunshot detection market?

A. Defense, homeland security, and commercial are among the leading application of the gunshot detection market.

Q5. What are the upcoming trends of gunshot detection market in the world?