Hydrogen fueling station has gained tremendous focus after the successful progress with cell electric vehicles, which came into existence depending on hydrogen power. Thus, hydrogen filling stations have attracted much attention following the recent success of cell electric vehicles powered by hydrogen. These stations generally consist of a hydrogen storage system, a cooling system, and a dispenser with a nozzle that connects with the fuel cell vehicle. It is designed to route highly pressured hydrogen to the nozzle for refueling the vehicle with up to 700 bar or in other cases, 350 bar. The hydrogen refueling process is constantly monitored electronically & takes roughly three minutes to refuel a fuel cell electric vehicle (FCEV).

The COVID-19 pandemic not only affected operations of the automotive industry, but the economic crisis also led to reduction in expenditure on next-generation technologies, for instance, hydrogen-powered vehicles, thereby affected the hydrogen fueling station market. In Europe, economies such as Germany, France, Spain and, Italy, are following stringent measures such as attaining social distance and limiting movements to prevent the spread of coronavirus. In addition, slight decline in the sales of fuel cell electric vehicles (FCEVs) has moderately impacted the demand for market globally. However, the positive outlook by governments to embark upon the utilization of low carbon technologies and boost decarbonization initiatives is anticipated to stabilize the hydrogen fueling station industry in the post COVID-19 stage. 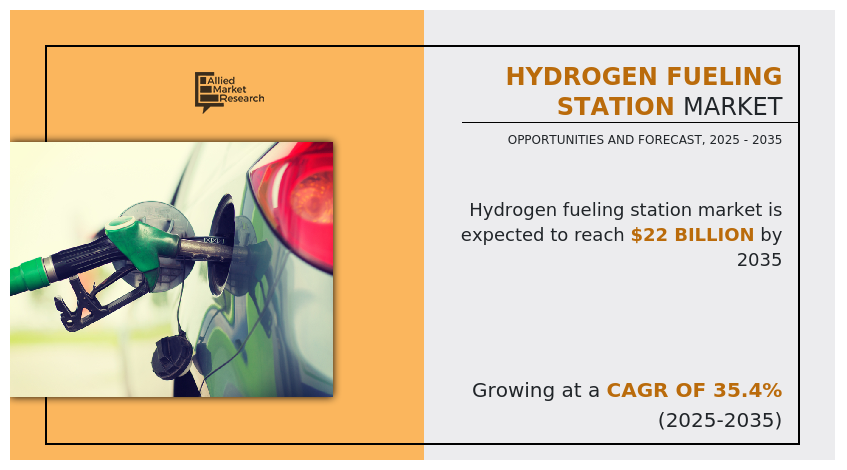 Large is projected as the most lucrative segment

The factors such as stringent government regulations to control increasing pollution, high suitability of hydrogen as fuel, and increase in R&D activities related to hydrogen fuel cell technology supplement the growth of the hydrogen fueling station market. However, high initial expenditure for producing hydrogen and lack of fuel infrastructure are the factors expected to hamper the growth of the market. In addition, technological advancements and future potential in the hydrogen fuel cell vehicle and increase in investments & encouragement in administrative policy framework creates market opportunities for the key players operating in the hydrogen fueling station market.

The hydrogen fueling station market is segmented into station type, vehicle type, vehicle technology, delivery method, and region. By station type, the market is divided into small, medium, and large. By vehicle type, it is fragmented into passenger cars and commercial vehicles. By vehicle technology, it is categorized into proton exchange membrane fuel cell, phosphoric acid fuel cells, and others. By delivery method, it is further classified into on-site and off-site. By region, it is analyzed across North America, Europe, Asia-Pacific, and LAMEA.

Commercial vehicles is projected as the most lucrative segment

Unlike conventional power generation sources, fuel cell does not emit hazardous gases and pollution, which is harmful for the environment. Also, depletion of natural resources, carbon emissions, and rise in cost of fossil fuels is paving the way for alternate means of transportation and power generation. Therefore, continuous efforts have been taken by both public and private sectors to reduce carbon emissions and save fuel. Strict government regulations related to CO2 and SO2 emission are expected to drive the growth of the hydrogen fueling station market size globally. For instance, in 2020, European Commission issued a regulatory proposal confirming an 81g/km target by 2025, and 59g/Km target by 2030. Strict government regulations such as 81g/km CO2 emissions in Europe and 113g/Km CO2 emissions after 2022 by Corporate Average Fuel Economy (CAFE) in the U.S., are the major factors supporting the growth of the hydrogen fueling station industry. Hydrogen fuel cells are considered environment friendly as compared to other conventional power generation systems, thereby increasing their demand worldwide. Strict government mandates in Asia-Pacific, mainly in China and Japan, also contribute toward the growth of the hydrogen fueling market. In addition, “Go Green” revolution is another factor driving the market growth.

Others is projected as the most lucrative segment

Increase in R&D activities related to hydrogen fuel cell technology has led to rise in joint developments and partnerships regarding adoption of hydrogen fueling stations. For instance, in July 2022, Shell collaborated with Shenergy Group, a state-owned enterprise owned by Shanghai government dealing in electricity, petroleum and natural gas, to set up a joint venture that worked to build a hydrogen refueling network in Shanghai. Furthermore, the joint venture plans to build six to 10 hydrogen refueling stations in Shanghai and the surrounding Yangzte River Delta in the next five years. Moreover, governments across the globe are promoting use of hydrogen powered vehicles. For instance, in 2019, European Union (EU) started H2Haul project which will run for five years. This EU-funded project aims to deploy 16 zero-emission fuel cell vehicles at four sites i.e., Germany, Belgium, Switzerland, and France by 2024. Moreover, the California Air Resources Board (CARB), Toyota, Shell, and Kenworth started $82 million Zero-Emission and Near Zero-Emission Freight Facilities (ZANZEFF) project. With the use of this project Port of Los Angeles (POLA) is expected to establish a fuel-cell technology network for freight transport to move goods from “Shore to Store”. Hence, these factors are expected to propel the growth of the market during the forecast period.

On-site is projected as the most lucrative segment

Hydrogen (in gaseous form) is usually extracted from water by electrolysis process, which includes passing a high electric current through water to isolate oxygen and hydrogen atoms. Electrolysis process is quite expensive as it includes high expenditure on energy requirements. Furthermore, hydrogen poses challenges for designers, in terms of mass and volume requirements as well as for fuel management and storage onboard vehicle. Moreover, as per Hydrogen Review, 2021, by the International Energy Agency (IEA), a key obstacle for low-carbon hydrogen is the price gap with hydrogen from fossil fuels. Currently, manufacturing hydrogen from fossil fuels is inexpensive in most parts of the world. Using carbon capture, utilization, and storage (CCUS) technologies to decrease the CO2 emissions from hydrogen creation surges the leveled cost of creation to around $1 to $2 per kg. However, using renewable energy it costs around $3 to $8 per kg. Above mentioned factors are anticipated to obstruct the market growth of the hydrogen fueling station market during the forecast period.

In current business scenario, technological advancements have added additional features in these gadgets which have increased the fuel cell consumption. Various applications such as fuel cell vehicles, increase in use of fuel cell in the power backup system and many other applications, are opportunistic for the growth of the hydrogen fueling station market. New technological advancement in the fuel cell technology leads to the development of new type of fuel cell such as solid oxide fuel cell (SOFC), polymer exchange membrane fuel cell (PEMFC), molten carbonate fuel cell (MCFC), phosphoric acid fuel cell (PAFC) and others, which help in reducing the cost of fuel cell. For instance, in April 2022, ITM Power PLC partnered with Motive, a 50/50 joint-venture owned between ITM Power PLC and Vitol, to support Motive with the development and roll-out of new green hydrogen refueling stations. This partnership helped facilitate increase of production, distribution, and demand stimulation for hydrogen for transportation applications. Hence, increase in adoption of fuel cell in various portable, stationary, and transportation applications is anticipated to provide opportunities for the development of the hydrogen fueling station market share.

This section provides the opinions of various top-level CXOs in the global hydrogen fueling station market. Hence, based on the interviews of various top-level CXOs of leading companies, hydrogen is expected to be used in several industries, which could quicken advancements of fuel cells and storage systems, push downstream infrastructure, and drive down supply chain costs. For instance, in April 2022, PDC Machines Inc. collaborated with Ivys Energy Solutions and ENGV, a clean fuels infrastructure solutions provider for fleet applications, to deliver a SimpleFuelFast at CSIRO’s Victorian Hydrogen Hub in Melbourne. The custom solution could deliver hydrogen at up to 20 kg/day and pressures of up to 700bars.

In addition, a rise in demand for public transport services and investment in infrastructure development is anticipated to boost the growth of the global hydrogen fueling station market. Countries such as China, Japan, and South Korea are among the leading nations that have introduced enormous hydrogen fuel cell vehicle deployment targets and a positive roadmap for establishing hydrogen fueling station facilities. For instance, in July 2022, Shell collaborated with Shenergy Group, a state-owned enterprise owned by the Shanghai government dealing in electricity, petroleum, and natural gas, to set up a joint venture to build a hydrogen refueling network in Shanghai. Furthermore, the joint venture plans to build six to 10 hydrogen refueling stations in the next five years in Shanghai and the surrounding Yangzte River Delta. Also, rising carbon emission levels have led various countries to introduce stringent regulations to check greenhouse gas (GHG) emissions in the short, medium, and long terms. For instance, in October 2021, Japan’s Prime Minister accepted Japan’s sixth energy plan, memorializing the 2050 carbon neutrality pledge, and included targets for energy produced from hydrogen sources at 1% of Japan’s total power generation by 2030.

Among the analyzed regions, Asia-Pacific is the highest revenue contributor, followed by North America, Europe, and LAMEA. On the basis of forecast analysis, Europe is expected to lead during the forecast period, due to adoption of carbon reduction policies by European Union and technological advancements with the dedication of R&D initiatives.

Q1. What are the upcoming trends of hydrogen fueling station market in the world?

A. Increased usage of Proton Exchange Membrane Fuel Cell and Phosphoric Acid Fuel Cells are the upcoming trends of Hydrogen Fueling Station Market in the world

Q2. What is the leading application of hydrogen fueling station market?

A. Increased implementation in passenger cars is the leading application of Hydrogen Fueling Station Market

Q3. Which is the largest regional market for hydrogen fueling station?

A. Asia-Pacific is the largest regional market for Hydrogen Fueling Station

Q4. What is the estimated industry size of hydrogen fueling station?

Q5. Which are the top companies to hold the market share in hydrogen fueling station?