The spread of COVID-19 has already negatively influenced the global hydrogen powered engine market globally.The COVID-19 pandemic not only affected operations of the automotive and transportation industry, but the economic crisis also led to reduction in expenditure on next-generation technologies, for instance, hydrogen-powered engines. Before COVID-19, the transportation industry witnessed continuous growth. Governments all around the globe were focusing on investing huge amount for hydrogen-based vehicles and related technologies. However, adverse impacts of the COVID-19 pandemic have resulted in interruption in activities and initiatives regarding development of hydrogen powered engines. Many governments trimmed their spending on other sectors and poured a hefty amount of investment in improving healthcare facilities to lessen dangers pertaining to the pandemic.Government authorities and operators are expected to accelerate and resume development of clean fuel technology after pandemic, which is anticipated to positively affect the growth of the hydrogen powered engine market 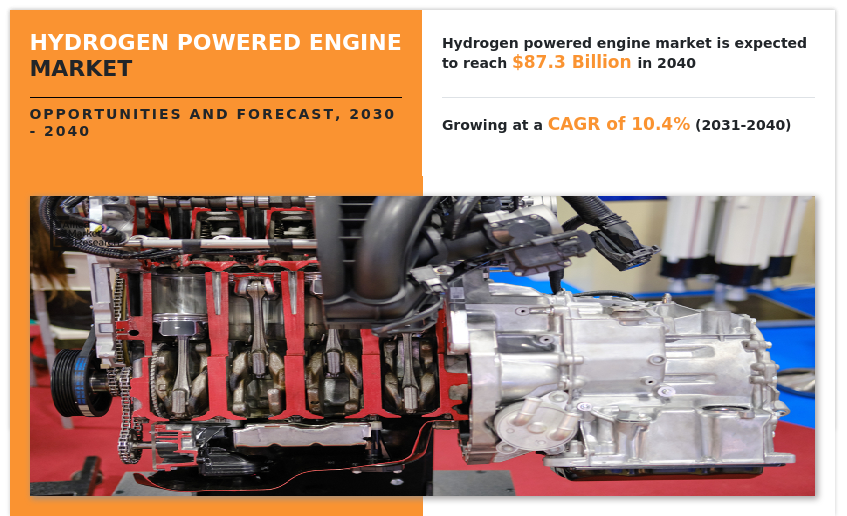 The hydrogen powered engine market is segmented into Installation, Technology, Application and Propulsion.

Hydrogen powered engines are an engine- which require hydrogen fuel as the type of fuel for the propulsion of the vehicle. Hydrogen based powered engines require the electrochemical usage of hydrogen rather than the combustion process. The hydrogen engines acts as power source for hydrogen powered vehicles. Research on hydrogen as a potential fuel to power zero-emission engines has been on rise in the recent years. The transportation sector is working to develop technologies to tackle challenges associated with hydrogen storage infrastructure, public perceptions for safety, and cost.

Factors such as increase in government initiatives to encourage the adoption of fuel cell vehicles, rise in demand for fuel cells in automotive and transportation, and increase in demand for passenger transportation are anticipated to boost the growth of the global hydrogen powered engine market during the forecast period. However, high costs associated with production and handling of hydrogen and absence of adequate refueling infrastructure are expected to hinder the growth of the global market during the forecast period. Moreover, increase in stringent emission norms and developing green hydrogen ecosystem in the aerospace industry are expected to create an opportunity for the hydrogen powered engine industry in near the future.

Retrofit is projected as the most lucrative segment

Government initiatives are expected to play a crucial role in promoting fuel cell electric vehicles in many countries. Several countries are implementing plans to ban petrol and diesel vehicles in the 2030-2040 timeframe, to reduce emissions and encourage the sales of fuel cell vehicles. For instance, in 2019, the Government of Japan announced its target to deploy about 800,000 fuel cell vehicles, along with 900 new hydrogen refueling stations, by 2030. In addition to this, governments are also supporting OEMs and vehicle manufacturers by funding the several hydrogen vehicles projects. For instance, in July 2021, the U.S. Department of Transportation (USDOT) and the State of California allocated around $929 million in federal grant funding to support California’s High-Speed Rail project. In 2018, the German Ministry for Transport and Digital Infrastructure awarded $12.53 (€12 million) contract to Siemens, Canadian fuel cell manufacturer, Ballard Power Systems, and RWTH Aachen University to develop more efficient hydrogen-powered fuel cells for German trains.

Proton Membrane Exchange is projected as the most lucrative segment

Moreover, several tax relaxations and incentives for fuel cell bikes are also being put in place to encourage the sales of such advanced electric and hydrogen fuel cell vehicles. These initiatives are expected to drive the demand for fuel cell bikes, which in turn are projected to support the growth of the fuel cell vehicle market. Hence, increase in government initiatives and regulation to ban or reduce the sale of vehicles running on internal combustion engines (ICEs) are expected to drive the hydrogen powered engine market growth during the forecast period.

Rise in demand for fuel cells in automotive and transportation

Fuel cell vehicles offer high driving range, fast refueling, noiseless operation, and zero emission of greenhouse gases and air pollutants. Hence, the use of fuel cells is ideal for transportation and automotive applications. Moreover, fuel cells are also used as stationary fuel sources in commercial applications. Fuel cells can be used as primary power, backup power, and to generate heat and power in combined heat and power (CHP) systems. Also, rise in demand for the fuel cell as a greener alternative to the traditional cells is providing promising opportunities. According to the U.S. Department of Energy in 2018, around 68,500 fuel cell units were shipped for different applications, globally, generating $2.3 billion fuel cell revenue. Almost 560 MW fuel cell power was used for transportation applications. Moreover, governments are taking initiatives and promoting fuel cells for vehicle market, which can further boost the demand for fuel cells in the automotive fuel cell engine industry.

Marine is projected as the most lucrative segment

High costs associated with production and handling of hydrogen

Hydrogen (in gaseous form) is usually extracted from water by the electrolysis process, which includes passing a high electric current through water to isolate oxygen and hydrogen atoms. The electrolysis process is quite expensive as it includes high expenditure on energy requirements. Furthermore, hydrogen poses challenges for designers, in terms of mass and volume requirements, as well as for fuel management and storage onboard aircraft. High volume-to-energy property of liquid hydrogen (LH2) requires hydrogen aircraft to contain a huge quantity of fuel as compared to legacy kerosene-fueled aircraft. This leads to higher air drag and affect fuel efficiency of the aircraft. A typical property of hydrogen is that it has a lower density, and is quite lower than gasoline. For this reason, it has to be compressed and brought to a liquid state and stocked in the same manner at lower temperatures to sustain its effectiveness and efficiency as a power source. This is the reason why hydrogen must necessarily be transported and stored in high-pressure conditions, which makes the application of hydrogen for transportation and common use not feasible presently. Above mentioned factors are anticipated to obstruct the market growth of the hydrogen powered engine market during the forecast period. In addition, transition from petroleum-based aircrafts and vehicles to hydrogen vehicles and aircraft incur huge costs. Big investments are required to design and manufacture the new customized vehicles. Hence, such factors hamper growth of the market.

Vehicles running on fuel cells are becoming an integral part of the transportation industry, and it represents a pathway toward achieving energy efficiency, along with reduced emission of pollutants and other greenhouse gases. With the growing environmental concerns, governments and environmental agencies are enacting stringent emission norms and laws, which are expected to increase the manufacturing cost of fuel-efficient IC engines, thereby propelling the demand for fuel cell bikes in the coming years. For instance, regulation on CO2 emissions in Europe and the U.S. is becoming more stringent. Europe has set its emission limits of 95 g/km by 2020 and a further 37.5% reduction by 2030, resulting in a limit of 59 g/km. North America has set emission limits of over 99 g/km following the Passenger Vehicle Corporate Average Fuel Economy (CAFE) standards for 2025. To reach the pollution standards and avoid penalties, more electrified vehicles, including fuel cell vehicles (bikes) are expected to be marketed by OEMs in the coming years, which is anticipated to create lucrative market opportunity in the market. Thus, the endorsement of stringent tail pipe emission norms and regulation to ban or reduce the sale of vehicles running on internal combustion (IC) is expected to aid the hydrogen powered engine market during the forecast period

Europe would exhibit the highest CAGR of 11.3% during forecast period

The hydrogen powered engine market is expected to witness significant growth, due to increase in government support for fuel cell vehicles with rapid urbanization and implementation of stringent laws toward CO2 emission. The hydrogen powered engine market is supplemented by the developments carried out by different companies, such as Toyota, Alstom, Zeroavia, Inc., Ballard Power Systems Inc., and others. These companies have heftily invested in hydrogen powered technology as well as have carried out collaborations and partnerships with different companies; thus, boosting the market growth.

According to a key executive of leading market players operating in hydrogen fueled transportation, growth in infrastructural development for hydrogen across the globe is expected to hold a great potential for availability of cost effective hydrogen in the next decade. This is anticipated to boost initiatives for development of hydrogen fueled vehicles, aircrafts, trains, and others in the coming years.

To fulfil the changing demand scenarios, market participants are concentrating on product launch and product developments to offer a diverse range of products and meet new business opportunities. For instance, in February 2022, Alstom and SNCF Voyageurs launched the first French hybrid train for the Occitanie, Grand-Est, Nouvelle-Aquitaine and Centre-Val-de-Loire regions. Moreover, in May 2022, Cummins Inc. launched its 15-liter hydrogen engine at ACT Expo in Long Beach, California. This engine is built on Cummins’ new fuel-agnostic platform, where each fuel type’s engine below the head gasket has largely similar components, and each fuel type’s engine above the head gasket has different components for different fuel types. In addition, market participants are making agreements with other companies to match changing end-user requirements. For instance, in June 2020, Urban Aeronautics Ltd. signed an agreement with HyPoint to advance the incorporation of hydrogen power in its CityHawk eVTOL design and to explore the development of an advanced version of Urban Aeronautics’ CityHawk eVTOL powered by HyPoint’s cutting-edge, hydrogen fuel cell stack technology.

Q1. What is the estimated industry size of hydrogen powered engine?

Q2. What are the upcoming trends of hydrogen powered engine market in the world?

A. Increase in stringent emission norms and developing green hydrogen ecosystem in aerospace industry is expected to fuel the demand for Hydrogen Powered Engine Market

Q3. What is the leading application of hydrogen powered engine market?

A. Roadways is the leading application of Hydrogen Powered Engine Market

Q4. Which is the largest regional market for hydrogen powered engine?

A. Europe is the largest regional market for Hydrogen Powered Engine

Q5. Which are the top companies to hold the market share in hydrogen powered engine?