The growth of the ice hockey sticks market was severely restricted owing to the onset of the pandemic, due to lockdowns and quarantines enforced throughout the world. Due to ice hockey being a close contact sport, the tournaments and league games were also postponed or canceled, leading to a major loss of sales of ice hockey sticks for the game seasons during the pandemic. 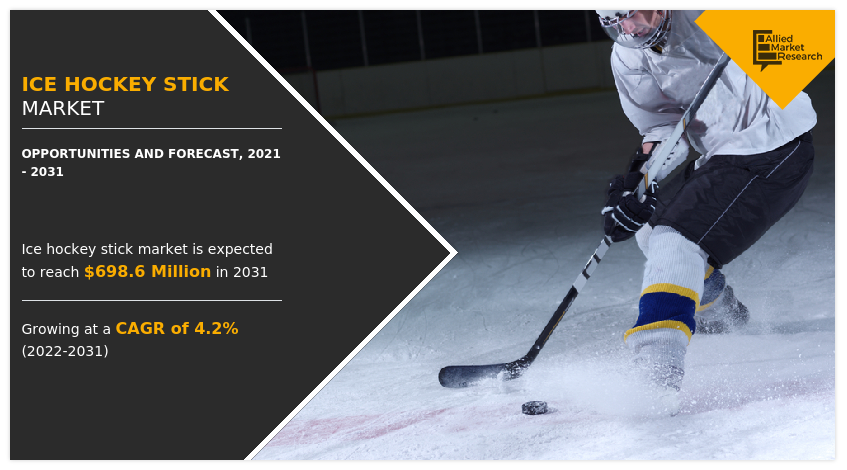 Ice hockey is most commonly played outside on water bodies like lakes or pools in the winter when the water is completely frozen, however, it can also be played on indoor ice hockey arenas called rinks. Most of the professional ice hockey players use carbon fibre composite ice hockey sticks as they are the most flexible, durable, and provide the ability to incorporate features like low and middle kick points. However, carbon fibre ice hockey sticks can be expensive for trainees and minor league players, hence they use sticks made with fiberglass composites which significantly reduces the costs of the sticks while maintaining the majority of the characteristics of premium priced sticks. Wooden sticks are most commonly used by recreational players and younger children as they are very low priced and easy to handle.

Increasing number of national and international ice hockey leagues and tournaments in the world are providing a massive boost the he games popularity. Many consumers are engaging in the sport, which is leading to an increase in the ice hockey stick market size. Furthermore, many brands and companies are investing heavily into these tournaments and leagues as well as with the popular players, forming band deals and campaigns, which is leading to further promotion of ice hockey as well as the ice hockey sticks. However, the lack of proper ice rinks and hotter climatic conditions in many developing countries across the world make it difficult for regular consumers to play ice hockey due to either the unavailability of ice rinks where they reside or due to the very high charges levied for the utilization of the rinks.

Composite sticks are the most commonly used types of ice hockey sticks and thus are the major market share holders in 2021.

Adults are the primary users of ice hockey stick, as they are heavily engaged in the sport and use several different stick for practicing and for games.

Adults are the primary users of ice hockey stick, as they are heavily engaged in the sport and use several different stick for practicing and for games. Adult segment is predicted to retain its dominance throughout the ice hockey stick market forecast, however, the, children segment is predicted to have the highest growth due to several children starting to play the sport in their young age.

Offline channels of ice hockey stick purchase is the most popular in 2021, however, the online channels of sale are predicted to have the highest growth during the forecast period.

North America is the largest consumer of ice hockey sticks as it is a very popular sport in the region and is also the national winter sport of Canada.

North America is the largest consumer of ice hockey sticks as it is a very popular sport in the region and is also the national winter sport of Canada. Europe is the second largest due to the severe popularity of the sport in the Nordic region. LAMEA is the predicted to have the significant ice hockey stick market growth during the forecast period due to the improving lifestyle, greater exposure to western sports, and increasing number of facilities and leagues of ice hockey in the region.

Ice hockey is an intensely physical sport that is heavily enjoyed primarily by the citizens of North America and Europe. Most of the consumers of ice hockey sticks are either professional players of the sport or consumers who play ice hockey for fun, recreation, and as a mode of exercise and workout. These types of consumers are primarily attracted to cost-effective sticks, that are also strong and durable. A large number of open lakes and water bodies that freeze during the winters in northern countries and countries with snowfall provide easier access to adequate surfaces for consumers for playing ice hockey.
Ice hockey sticks for casual playing are made of wood or fiberglass composites, as they offer high durability and features at lower rates. Fiberglass composite ice hockey sticks are the most popular amongst kids who are practicing at the intermediate levels as they give the semblance of professional-level ice hockey sticks. Furthermore, the use of customized composite ice hockey sticks for national and international level competitions is highly prevalent.
Ice hockey is gaining traction amongst sports enthusiasts in developing nations due to the fast pace and intense levels of competition in the game. Many countries that are a part of the International Ice Hockey Federation but do not hold any rankings or positions are looking to strengthen their teams in order to improve their nation's standing in the sport, which is providing a major boost to the sport in their respective countries. This will lead to an increase in interest in the sport with many new players entering ice hockey, which will lead to a greater sale of ice hockey sticks thus helping the market achieve growth.

Q1. What are the segments of ice hockey stick market?

A. By type, end user, distribution channel, and the region are the key segments of the ice hockey stick market.

Q2. Which is base year calculated in the ice hockey stick market report?

A. 2021, is the base year calculated in the ice hockey stick market.

Q3. What would be forecast period in the market report?

Q4. What are the upcoming trends of Ice Hockey Stick Market in the world?

Q5. Which is the largest regional market for Ice Hockey Stick?

A. North America is the largest consumer of ice hockey sticks as it is a very popular sport in the region and is also the national winter sport of Canada.

Q6. What is the estimated industry size of Ice Hockey Stick?

Q7. What are the market values / growth % of emerging countries?

Q8. Which are the top companies to hold the market share in Ice Hockey Stick?