Incident and emergency management refers to a standardized approach, which prevents & manages incidents or humanitarian emergencies that have severe outcomes. It is involved in the integration and deployment of emergency systems and solutions at all government and nongovernment platforms. The global incident and emergency management market was valued at $75,464 million in 2017, and is projected to reach $423,323 million by 2025, registering a CAGR of 24.2% from 2018 to 2025. 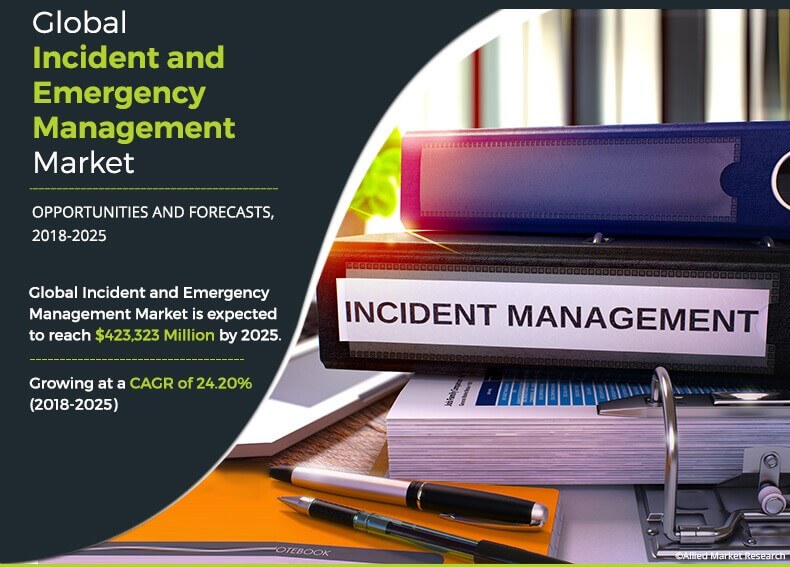 The surveillance systems segment dominated the market in 2017 and is expected to continue to continue this trend during the forecast period. However, the disaster recovery & backup system segment is expected to witness highest growth rate, due to rise in adoption of cloud-based solutions in small- & medium-sized enterprises to safeguard their critical data. 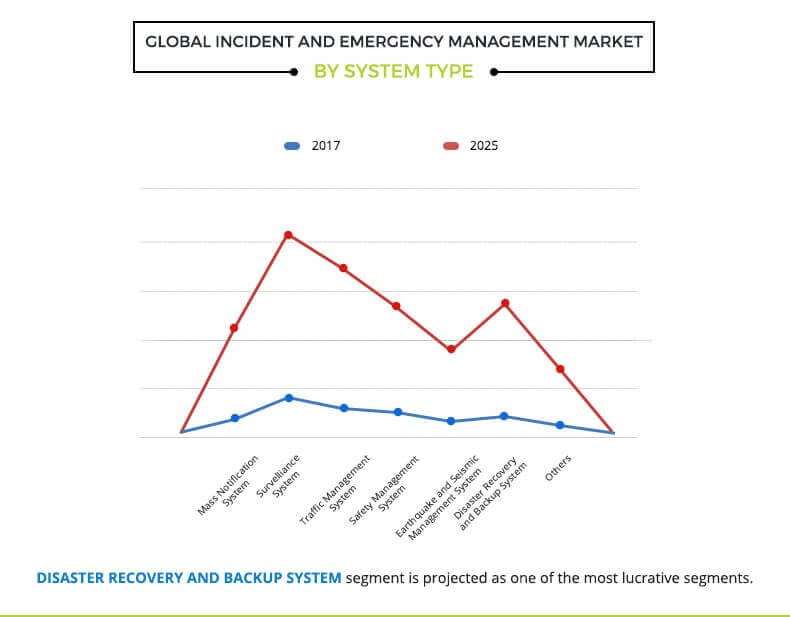 The satellite phones segment led the overall incident and emergency management market share in 2017 and is expected to maintain its dominance in the near future, owing to rise in adoption of satellite phones by emergency respondents for communication during disaster relief. 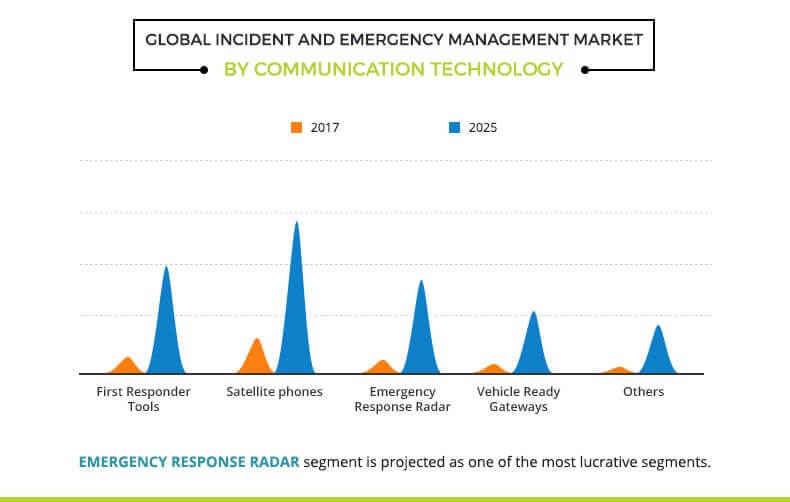 Europe governed the overall market in 2017, due to increase in terrorism in the region. However, Asia-Pacific is expected to witness the highest growth rate during the forecast period, owing to increase in government initiatives for public safety. 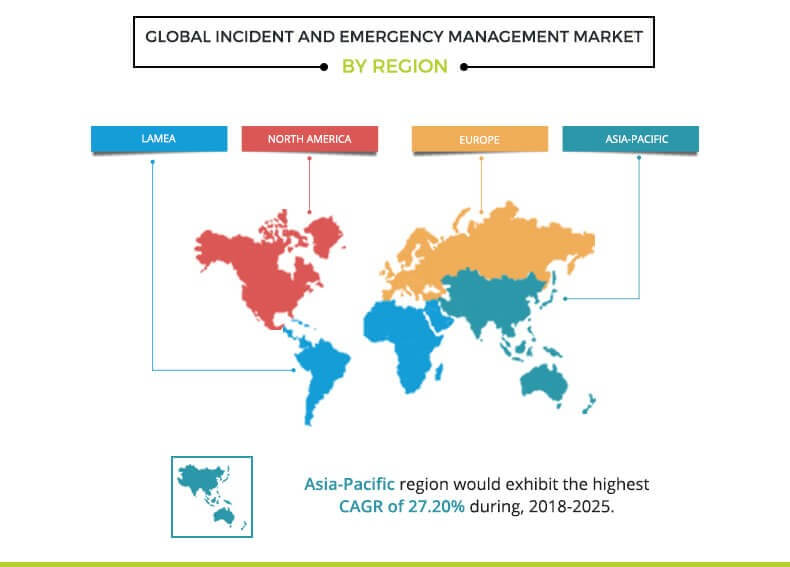 The report focuses on the drivers and restraints of the market based on the analysis of regional trends. Moreover, the study provides Porter’s five forces analysis of the industry to understand the impact of various factors such as bargaining power of suppliers, competitive intensity of competitors, threat of new entrants, threat of substitutes, and bargaining power of buyers on the growth of the market.

The global incident and emergency management market is segmented on the basis of system type, communication technology, service, solution, industry vertical, and region. Based on system type, the market is divided into mass notification system, surveillance system, traffic management system, safety management system, earthquake/ seismic warning system, disaster recovery & backup systems, and others. Depending on communication technology, it is segregated into first responder tools, satellite phones, emergency response radars, vehicle-ready gateways, and others. By service, it is fragmented into training & education services, consulting services, design & integration services, and support & maintenance services. As per solution, it is divided into geospatial solutions, disaster recovery solutions, and situational awareness solutions. According to industry vertical, it is categorized into BFSI, energy & utilities, manufacturing, healthcare, aerospace & defense, public sector, transportation & logistics, telecom & IT, and others. Region wise, it is analyzed across North America, Europe, Asia-Pacific, and LAMEA.

The global incident and emergency management market is influenced by a number of factors such as rise in economic loss due to natural disasters, upsurge in terrorist attacks, and implementation of government mandates to mitigate such emergencies. In addition, higher installation & maintenance cost and use of advanced technology by terrorist groups for attacks are anticipated to propel the demand for incident and emergency management solutions. Moreover, increase in market for smart cities drives the adoption of intelligent surveillance and evacuation systems, which acts as a significant impacting factor of the market. However, each factor is anticipated to have its definite impact on the market growth.

Rise in Economic loss due to natural disasters

Although the world has witnessed natural disasters since centuries, their impact has currently been aggravated. In 2017, several incidents such as hurricanes, earthquakes, and major wildfires were recorded. According to an insurance firm, Swiss Re Group, the world economy was hampered significantly due to these calamities, bearing loss of $306 billion in 2017 and $188 billion in 2016. Moreover, according to National Geographic, the most expensive season in the U.S. history was the 2017 Hurricane Season, which led to loss of $200 billion. Thus, increase in incidence of such disasters and rise economic loss have enforced governments of various countries to implement proper incident and emergency management systems.

Since the last few decades, terrorist attacks have been increasing constantly across the globe. According to the United States Department of States, more than 11,000 terrorist attacks were recorded in 2016 globally, resulting in more than 25,600 deaths and injuring over 33,800 people. Moreover, Europe has been experiencing a sharp increase in the number of terrorist attacks since 2015. Thus, surge in terrorism fuels the need for deployment of effective surveillance and notifications systems for public safety.

Furthermore, the developing countries, such as China and India, have heavily invested in upgrading their airport infrastructure, which in turn is expected to boost the demand for incident and emergency management systems. For instance, India is planning to invest around $120 billion for the development of airport infrastructure and aviation navigation services over the next decade.

Government regulations ensure proper implementation of emergency preparedness and safety measures, which drive the adoption of these systems. For instance, National Incident Management System (NIMS) and National Response Framework (NRF) put forth a systematic approach for emergency preparedness. Similarly, Fire Safety and Evacuation of Buildings Regulations 2006 deployed evacuation systems necessary in buildings to alert people in case of fire. For example, North America recorded a fire loss of ~14.3 billion in 2015; thus, safe evacuation is one of the mandatory features in commercial & residential buildings. Moreover, governments in various countries, such as the U.S. and India, have installed mass number of CCTV cameras for public safety.

The incident and emergency management market is consolidated with the presence of key vendors constituting large market share. Europe and North America are the prime consumers of these systems. However, Asia-Pacific is expected to experience robust growth in the near future, owing to rise in government regulatory policies and initiatives for public safety in the emerging markets such as India and China. Some of the key players profiled in the incident and emergency management market report include Esri Inc., Honeywell International Inc., IBM Corporation, Intergraph Corporation, Intermedix Corporation, Lockheed Martin Corporation, Motorola Solutions, Inc., NEC Corporation, Rockwell Collins, and Siemens AG. These players have adopted various strategies to enhance their product portfolio and to increase their incident and emergency management market penetration. For instance, in October 2017, Motorola Solutions collaborated with Safariland Group to develop an innovative product, which delivers an alert signal to an agency command center on receiving firearm from Safariland 7TS.