Get detailed COVID-19 impact analysis on the India Bitumen Market

Bitumen is a black to dark brown sticky material, composed principally of high molecular weight hydrocarbons. It is a semi-solid hydrocarbon product of crude oil distillation, which is produced by removing the lighter fractions (such as liquid petroleum gas, petrol, and diesel) from heavy crude oil during the refining process. The physical properties of bitumen include adhesion, resistance to water, hardness, ductility, and higher softening point. 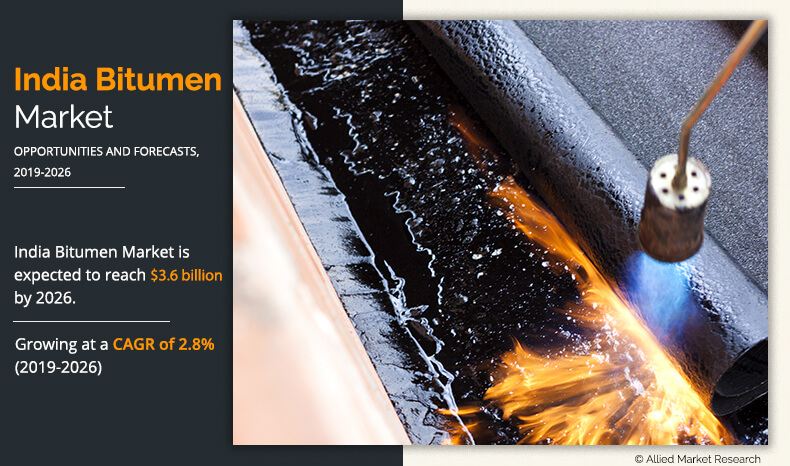 The growth of India bitumen market is majorly driven by increase in road and building construction activities. Construction of various national highways, expressways, and airport runways boosts the demand for bitumen across the country. Bitumen is processed into asphalt for road construction. In addition, rise in investments by the government for the development of national highways and expressways, which include projects relating two-laning of highways, the National Highways Development Project, six-laning of crowded stretches of the Golden Quadrilateral, a special program for the development of road connectivity in naxal affected areas, development of Vijayawada-Ranchi road, and for providing last mile connectivity, is anticipated to drive the growth of the market. Furthermore, bitumen is widely used in the construction industry for roofs, owing to its physical properties such as adhesion, resistance to water, hardness, ductility, and higher softening point. Therefore, growth in the construction industry due to growth in population across the cities and demand for new houses led to increase in demand for bitumen across the country. In addition, government initiatives such as Pradhan Mantri Awas Yojana (PMAY) that includes construction of houses for poor people living in both rural and urban areas is likely to increase the demand for bitumen; thereby, driving the growth of the India bitumen market.

However, human health & environmental issues associated with bitumen, fluctuating international crude oil prices, and increase in use of alternative of bitumen such as concrete in roadway construction applications are expected to restrain the growth of the market. Moreover, development of bio-based bitumen and EME (Enrobés á Module Elevé) binder is anticipated to provide lucrative opportunities for further development of the market.

The India bitumen market size is segmented on the basis of type, end-use industry, and region. Depending on type, the market is classified into paving grade bitumen, oxidized bitumen, polymer modified bitumen, and bitumen emulsions. By end-use industry, it is classified into road construction, waterproofing, and others. Region wise, it is analyzed across North India, East India, Northeast India, South India, and West India.

North India accounted for the major India bitumen market share in 2018, owing to major road network development initiatives undertaken by the Government of India (GoI) in the North India Region, which include national highways projects in Uttar Pradesh and Punjab. In addition, maintenance and repair of rural roads constructed under Pradhan Mantri Gram Sadak Yojana (PMGSY) in Haryana, Rajasthan, Uttarakhand, and Himachal Pradesh is anticipated to increase the demand for bitumen across these states; thereby, driving the growth of the bitumen market across North India.

Paving Grade Bitumen is projected as the most lucrative segment.

Paving grade bitumen segment accounted for the major share in 2018, owing to growth in road construction development activities across the country. Government projects such as Bharatmala, various national highway projects, and construction of various economic corridors in different states fuel the demand for bitumen emulsion across the country. In addition, initiatives launched by Government of India for construction of roads in rural areas such as Pradhan Mantri Gram Sadak Yojana (PMGSY) and upgradation, maintenance, and repair work of existing rural roads, national highways, and expressways are likely to boost the demand for bitumen across India; thereby, driving the India bitumen market growth.

Road Construction is projected as the most lucrative segment.

Depending on end-use industry, the road construction segment accounted for the major market share in 2018. The road construction segment includes national highway, state highway, rural roads, and airport runways. Government has initiated various road projects that include construction of various national and state highways, expressways, and airports to boost the infrastructural activities. In addition, to connect the rural areas of the country to the cities the government has launched initiatives like Pradhan Mantri Gram Sadak Yojana that provide good all-weather roads. This factor is anticipated to drive the growth of the market.

The India bitumen market has witnessed significant growth in the recent years, owing to increase in construction and infrastructural development activities initiated by the government in urban and rural areas of the country. Furthermore, increased road development activities such as construction of national highways & expressways and construction of economic and industrial corridors leads to surge in demand for bitumen across the country. In addition, construction of new airports across the country under the scheme name “UDAAN” to improve the air transport facilities is expected to fuel the demand for bitumen. Moreover, bitumen adhesive is widely used in waterproofing of the roof of the houses. Therefore, government initiatives such as “smart city mission” and “Housing for All” has increased the construction activities across the urban and rural areas to provide houses to both urban and rural population of the country; thereby, boosting the market growth. The infrastructural development activities in North-East states such as Assam, Arunachal Pradesh, and Mizoram also led to increase in demand for bitumen for road construction activities. Various government schemes like Pradhan Mantri Gram Sadak Yojana (PMGSY) that includes connectivity of villages to national highways by providing good all-weather roads and Pradhan Mantri Awas Yojana (PMAY) that includes providing houses to the poor people in rural area drive the growth of the bitumen market.