In the wake of COVID-19 pandemic situation, there is a rise in popularity of IoT devices in developing nations and increase in usage of analytics for finding useful insights from the IoT devises, which boosts the market growth. addition, various government organizations and aerospace organizations are adopting IoT solution for improving the loss suffered owing to the management losses, pandemic situation, and to improve their market share.

The internet of things (IoT) in aerospace and defense refers to the usage of networked smart devices with real-time data cooperation. IoT in A&D enables the aerospace and defense sector achieve optimal operating efficiency of the supplements with different characteristics such as predictive maintenance, data analytics, and smart surveillance, thanks to its connection and real-time data sharing.

Enhanced internet penetration and decreased cost of powerful sensors and controllers drive the global IoT in aerospace & defense market growth. In addition, growth in information, communication, and technology (ICT) and expenditure by governments in the several developed and the developing regions fuel the growth of the market. However, poor internet infrastructure in the developing nations and infrastructure simplification and standardization restrict the market growth. Moreover, rise in adoption of big data techniques and cloud computing and analytics is expected to offer remunerative opportunities for expansion of the market during the forecast period. 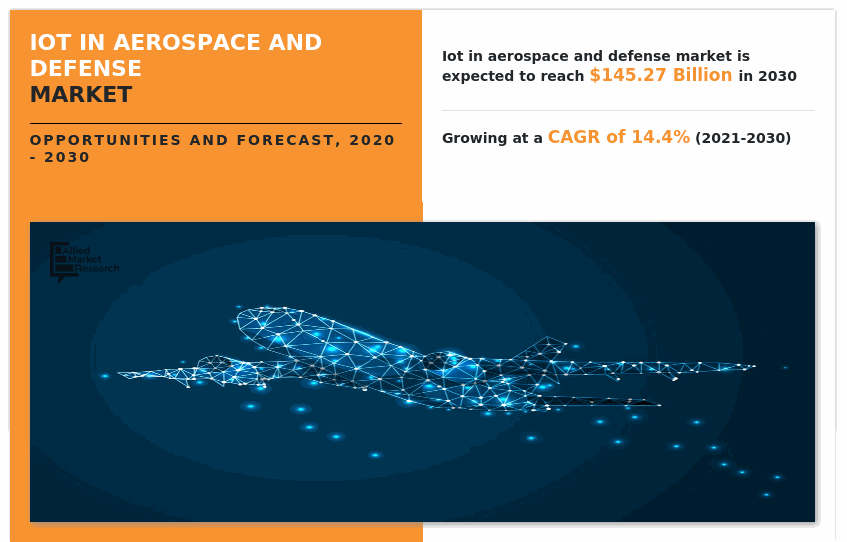 Hardware segment acquired the major share in the IoT in aerospace & defense market. The rising demand for IoT devices, low cost hardware requirements, and need of numerous sensors and chips for smart devices drive the growth of the software market for IoT in A&D.

In terms of component, hardware segment dominated the IoT in aerospace & defense market  size during the forecast period. The rising demand for IoT devices, low cost hardware requirements, and need of numerous sensors and chips for smart devices drive the growth of the hardware market for IoT in A&D. The enhanced security for IoT devices such as content protection, malware detection, authentication, and theft deterrence are key factors which are expected to create opportunities in the IoT in aerospace & defense market.

Region-wise, the IoT in aerospace & defense market size was dominated by North America in 2020, and is expected to retain its position during the forecast period, due to the presence of a large number of LTE subscribers in the U.S. and Canada. However, Asia-Pacific is expected to witness significant growth during the forecast period, owing to rise in number of number of subscribers in key regional markets such as China, India, Japan, and South Korea.

The Internet of things in aerospace & defense market witnessed significant growth in past few years and continued to grow during outbreak of the COVID-19 pandemic. In addition, the growing acceptance of data gathered through smart devices during the lockdown to improve aviation fuel consumption and additional costs also expands the prospects of the market. Furthermore, during the pandemic situation, emergency calling, mission-critical communications to protect responder personnel or situational awareness, mission-critical logistics support, public warning systems, and automated emergency response are the five major applications of IoT in aerospace & defense.

Predictive maintenance approaches are being used by defense organizations globally to improve efficiency and reduce maintenance costs.  The drive to improve the safety and efficiency of armed forces has made great progress because of the widespread deployment of Internet of Things (IoT) technology. As Internet is such an important component of the IoT, increased internet penetration across many businesses and countries, such as Asia-Pacific, boosts the market for IoT devices. Furthermore, the growing popularity of IoT devices in the consumer sector prompts numerous original equipment manufacturers (OEMs) to develop low-cost, high-performance sensors and controllers. The OEM industry is spurred by rise in the IoT trend. IoT is easily adopted in aerospace and military technologies because of the low cost of sensors and controllers.

Growth in Information, Communication, and Technology

IoT, cloud, and DevOps have massive effects on the IoT industry. Real-time equipment tracking, inter-equipment tracking, remote updates, and predictive maintenance are just a few instances of how technologies have advanced. Battlefield awareness, proactive equipment maintenance, warfighter health monitoring, remote training, and efficient inventory management are among the primary elements predicted to drive the IoT adoption in the aerospace & defense industry. Furthermore, emerging country governments boost their defense and aerospace spending, resulting in increase in demand for smart equipment and solutions in the aerospace & defense sector. The technological innovation along with efficient R&D of the developed and developing nations are key factors that fuel the growth of the IoT in aerospace & defense industry.

The cloud deployment strategy has a better potential for growth in the IoT in aerospace and defense (A&D) market. Cloud deployment is becoming more popular due to improved performance. Furthermore, increase in internet penetration and ICT expansion provide a viable opportunity for IoT in A&D solutions. Key market companies have implemented effective approaches to produce novel IoT to meet a variety of objectives, including decreased downtime and improved data analytics.

Key providers of the market, such as AeroVironment, Inc., AT&T Intellectual Property, and Elbit Systems Ltd., account for a significant share in the market. With increasing requirement from the IoT in aerospace & defense market for training and simulation, various companies have improved their IoT. For instance, in February 2020, Elbit Systems launched the Aircrew Mobile Simulation and Training Field (AMSTF), which is an Electronic Warfare (EW) system, enabling effective and efficient EW Training and Simulation (T&S) for pilots against realistic EW threats. In addition, the AMSTF system incorporates a range of transmitters, sensors, communications, command and control, and analytical systems to enable full spectrum coverage, including radio frequency, infra-red, and electro-optics, providing aircrews with the opportunity to conduct airborne training in a real life, multi-threat EW arena.

With increase in demand for IoT in aerospace & defense, various companies have expanded their current services to continue with the rise in demand. For instance, in January 2021, Honeywell introduced the next generation of its Cabin Pressure Control and Monitoring System (CPCMS) with applications in both, commercial and military aircraft. CPCMS helps maintain and monitor the air pressure inside an aircraft. It can be found onboard in any aircraft that flies high enough to require air pressurization, including commercial and business jets as well as military aircraft.

Furthermore, with the launch of 5G technology, the demand for IoT increased and major companies are collaborating to develop better defence solutions. For instance, in February 2022, Radisys, a global leader of open telecom solutions, announced the launch of its Connect RAN 5G IoT software stack, which supports diverse IoT use cases from ultra-low-cost, low battery device driven deployments like metering and asset tracking to mission-critical, ultra-low latency, time-sensitive industrial deployments, and XR, Video Surveillance, and wearables deployments. Radisys’ Connect RAN 5G IoT software enables rapid time-to-market for new use cases, while lowering the upfront CAPEX spend. The resulting acceleration of the RoI is a significant benefit for the entire 5G ecosystem.

Q1. What are the upcoming trends of IoT in Aerospace & Defense Market in the world?

A. Enhanced internet penetration and decreased cost of powerful sensors & controllers are some of the major trends in the global IoT in aerospace & defense market.

Q2. What is the leading application of IoT in Aerospace & Defense Market?

Q3. Which is the largest regional market for IoT in Aerospace & Defense?

Q4. What is the estimated industry size of IoT in Aerospace & Defense?

Q5. Which are the top companies to hold the market share in IoT in Aerospace & Defense?