After global vaccination, the governments of various countries have taken initiatives to launch policies to improve the tourism sector, which have led to surge in the air transportation. The willingness of an individual to spend money over leisure after the pandemic lockdown has had a positive impact on the market. The presence of above mentioned activities and change in policies due to outbreak of pandemic has a positive impact on the development of the market during the forecast period. 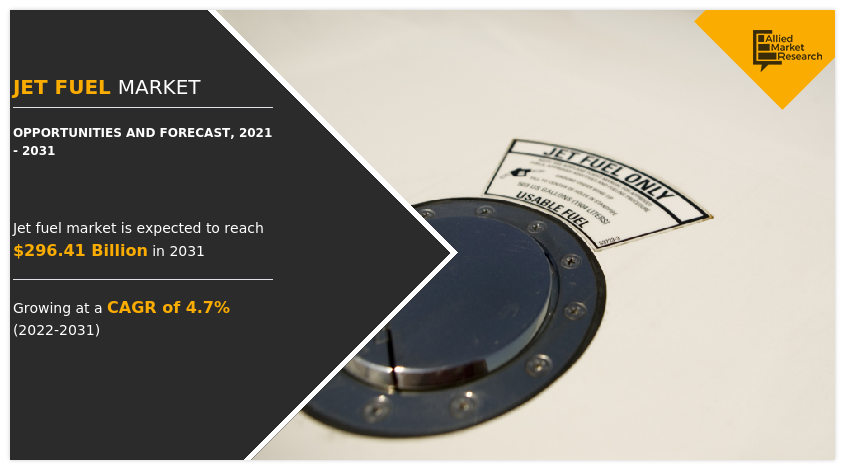 The jet fuel market is segmented into Application and Fuel Grade.

Jet fuels are aviation fuels used mainly by the U.S. and other North Atlantic Treaty Organization (NATO) nations for military establishments. Other fuels called Jet A and Jet A-1 are closely related fuels used by commercial airlines. Jet fuel is the third most important transportation fuel. It is a middle-distillate product that is used for jets (commercial and military) and is used around the world in cooking and heating (kerosene). When used as a jet fuel, some of the critical qualities of gasoline are freeze point, flash point, and smoke point. Commercial jet fuel has a boiling point range of approximately 190–275°C and that of military jet fuel is 55–285°C.

The presence of tourism, passenger travel, business travel, and freight transportation for a variety of industries, including consumer electronics, government, and food are all possible with commercial aircraft. Commercial aircrafts are an important part of the global aviation system that helps to generate long-term improvements in economic, social, and environmental efficiency. In 2021, around 5.7 billion gallons of jet fuel was used by the commercial aircrafts and was also second largest jet fuel market application after general aviation. In addition, government initiatives to promote the commercial aircraft market and expansion of airports in developing countries, including Africa, China, India, and Singapore, are projected to provide lucrative opportunities for prominent market players.

Air traffic is anticipated to grow at a significant rate in the future, which is projected to increase the demand for commercial aircraft across the globe, owing to increase in air traffic, improvement in air network, reduction in fuel prices, and surge in traveling frequencies through the air. According to the International Civil Aviation Organization (ICAO), by 2035, passenger traffic and freight volume is expected to increase. Factors such as growth in disposal income of the middle-class population and emergence of low-cost airlines led to an increase in number of airline passengers. In addition, as the number of airline passengers rises, demand for commercial aircraft services increases at a significant rate. The major countries such as Canada, the U.S., Brazil, Indonesia, Philippines, China, Saudi Arabia, and India witness a rise in number of air passengers. Surge in passengers and increase in utilization of air transportation for various purposes are expected to drive the jet fuel market growth.

North America to be the leading region till 2031

North America is analyzed across the U.S., Canada, and Mexico. A significant portion of the market share is held by the U.S, followed by Canada and Mexico. General Aviation included a total of 440,000 general aircraft flying worldwide (GAMA), as of 2019, ranging from two-seat training aircraft and utility helicopters to intercontinental business jets. Over 211,000 general planes are based in the U.S, which leads to it being dominant in the sector. Furthermore, the defense sector consumes a large amount of aviation fuel. On average, the U.S Air Force consumes approximately 2 billion gallons of aviation fuel annually, about 81% of the total Air Force energy budget. With around $732 billion on military spending in 2019, the U.S is leading in defense expenditure. The above mentioned initiatives are expected to be the major factors driving the growth of the market in this region during the forecast period.

Jet A segment to be most lucrative till 2031

The jet A segment dominates the global jet fuel market share. Jet A fuel is one of the jet fuel types that has been used in the U.S. since 1950s and is made up of pure kerosene. This type of fuel has a flash point higher than 100 0F, with an auto-ignition temperature of 410 0F. Furthermore, it has freezing point of -40 0F, which is higher than jet A-1 type fuel. Jet fuel of type A is widely used in the civil aviation industry. The return of the Boeing 737MAX into service and the recovery in domestic demand helped the OEMs in obtaining more orders and increasing aircraft deliveries in 2021. On the other hand, though the orders and deliveries of general aviation aircraft witnessed a decline in 2020 as compared to 2019, there is a growth in demand for helicopters and business jets to transport medical supplies, cargo charter operations, and VIP transport. This above mentioned activities are expected to provide ample opportunities for the development of the market.

General Avaition segment to be dominant till 2031

The general aviation segment dominates the global jet fuel market. General aviation is a term which encompasses all types of aviation besides military and commercial airlines. It includes various business models and all private flying transportation vehicles. General aviation encompasses most of the world’s flying. According to some sources, there are around 440,000 general aviation aircrafts around the world today, of which half of them are present in the U.S. The rapid industrialization and development in technology have created the need for the faster transportation services, hence general aviation comes in to services which further drives the demand for jet fuel market. General aviation consists of chartered flights, private flights, and other purpose flights. The presence of ever increasing demand for the above mentioned special service flights has led to increase in demand for the jet fuel. The presence of above mentioned advantages is expected to drive the growth of the market.

COVID-19 has severely impacted the global economy with devastating effects on global trade, which has simultaneously affected households, business, financial institution, industrial establishments and infrastructure companies. The novel coronavirus has affected several economies ad caused lockdown in many countries which has limited the growth of the market. The shutdown of industrial manufacturers led to decline in the demand for solar related equipment in most of the countries across the world, which led to decline in demand for the jet fuel market. The decrease in utilization of power in the industrial facilities across the globe during the outbreak has a negative impact on the development of the market.

After global vaccination, the governments of various countries have taken initiatives to launch policies to improve the tourism sector, which have led to surge in the air transportation. The willingness of an individual to spend money over leisure after the pandemic lockdown has had a positive impact on the market. The presence of above mentioned activities and change in policies due to outbreak of pandemic has a positive impact on the development of the market during the forecast period.

The global jet fuel market is expected to witness increased demand during the forecast period. This is attributed to rise in demand for jet fuel from various emerging economies and military sector.

Introduction of new flight routes (domestic and international) and investments from government in the field for construction of new airports also fosters the jet fuel market growth. Furthermore, there is an increase in the demand from developing economies from Asia-Pacific region such as China and India, owing to increased disposable income encouraging people to opt for air transport, boom in tourism industry, and rise in air traffic.

In-addition, demand from North America also largely contributed to the market growth owing to presence of key market players and increased investment for development from government in the region. Jet fuel is capable of enduring high temperature environment and is corrosion resistant, which makes it suitable for use at high altitudes. However, fluctuating crude oil prices and strict rules & regulation regarding carbon emissions impact the production process and limits the market growth.

Q1. What are the key factors boosting the Jet Fuel Market growth?

Q3. What are the most established players of the global Jet Fuel Market?

Q4. Which application is projected to increase the demand for Jet Fuel Market?

A. General aviation application is projected to increase the demand for Jet Fuel Market

Q5. What segments are covered in Jet Fuel Market report?

Q6. What is the Main Driver of Jet Fuel Market?

A. Initiatives toward R&D in reducing carbon emissions is the Main Driver of Jet Fuel Market

A. After global vaccination, the governments of various countries have taken initiatives to launch policies to improve the tourism sector, which have led to surge in the air transportation. The willingness of an individual to spend money over leisure after the pandemic lockdown has had a positive impact on the market. The presence of above mentioned activities and change in policies due to outbreak of pandemic has a positive impact on the development of the market during the forecast period.