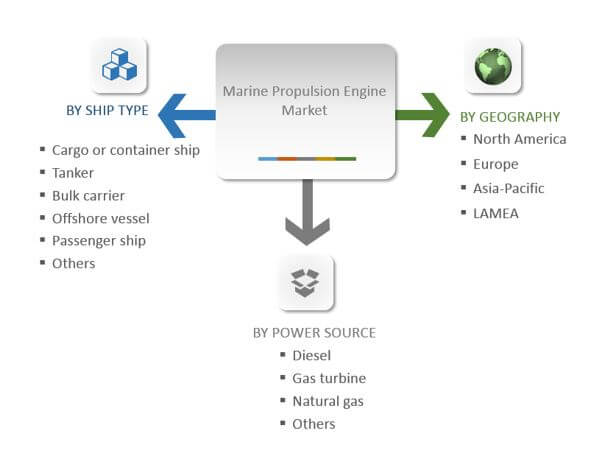 The market segmentation is based on power source, ship types, and geography. The power source segment is divided into diesel, gas turbine, natural gas, and others (steam turbine, renewable energy, hybrid, and fuel cell). By ship types, the market is categorized into cargo & container, tanker, bulk carrier, offshore vessel, passenger ship, and others (tugs & service ships). Geographically, the market is analyzed across North America, Europe, Asia-Pacific, and LAMEA. 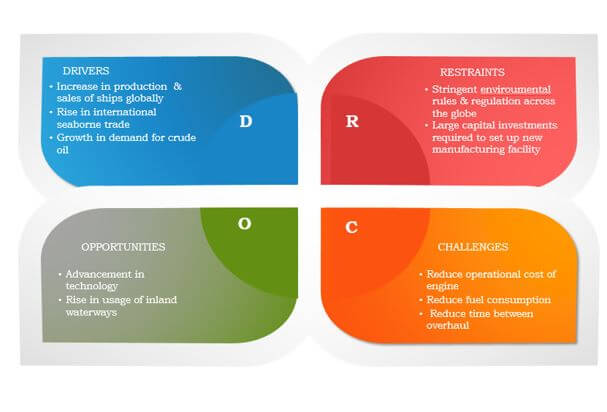 Increase in production & sales of ships globally and rise in international seaborne trade drive the market growth. In addition, increase in demand for resources such as crude oil, coal, steel, and iron from developing countries fuels the market growth. However, stringent environmental rules & regulations and large capital investment required to set up new manufacturing facilities hamper the market growth. Irrespective of these challenges, rise in usage of inland waterways and advancement in technology, such as new alternative fuel propulsion engine, are expected to provide various opportunities for new products and boost the market growth. 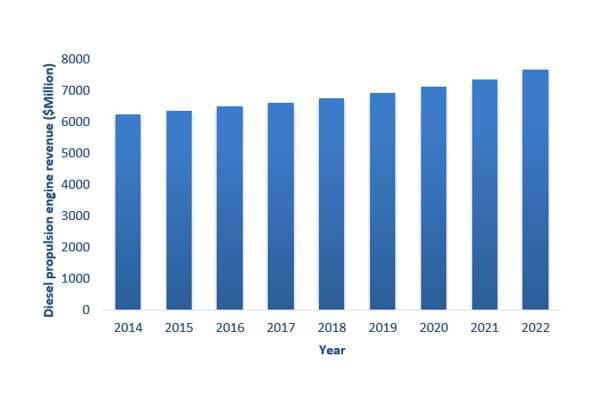 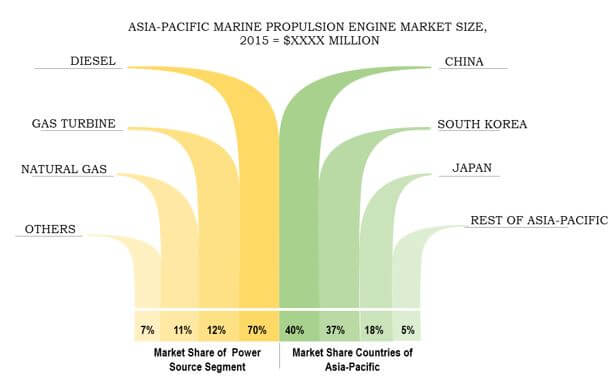 Marine propulsion engine is machine that burns fuel to create thrust, which helps ships to move across water. As of now, ship propulsion is not just about successful & smooth movement of the ship across the water. It also involves using the best mode of propulsion system to ensure a better safety standard for the marine ecosystem along with cost efficiency.

Rise in number of ships; increase in international seaborne trade; and increase in demand for resources such as crude oil, steel, iron, and coal drive the growth of the marine propulsion engine market. Furthermore, rise in usage of inland waterways and technological advancements such as fuel cell, hybrid & nuclear reactor engine boost the demand for marine propulsion engine.

As of now, there are latest RT-flex and ME engines which are camshaft less electronically controlled engines. These are used as intelligent engines by electronic control and feedback. Intelligent engine will monitor its own condition according to the feedback & pre- set setting and it will adjust the engine parameters itself.

The diesel propulsion engine segment constituted the largest market share owing to its benefits such as highly reliable engine, economical nature, low maintenance cost, and easy availability of diesel globally. The adoption rate of natural gas-powered marine propulsion engine is high as compared to others, owing to stringent marine engine emission rules and regulations. Moreover, the bulk carrier segment is expected to witness a robust growth due to increase in demand of resources such as ore, coal, grains and other similar products in loose form.

Asia-Pacific is projected to hold the largest market share, followed by Europe and North America. This is attributed to increase in shipbuilding industry of China and South Korea. Leading players such as Caterpillar, Cummins Inc., Rolls-Royce Plc, and Wärtsilä are expected to explore newer techniques and applications to cater to the growing demands of customers. Collaborations and acquisitions are projected to enable them to enhance their product portfolios and increase their geographical presence.