Get detailed COVID-19 impact analysis on the Memristor Market

Global Memristor Market was valued at $3.2 Million in 2015 and is expected to reach $79.0 million by 2022, supported by a CAGR of 69.9% during the forecast period 2016 to 2022. Memristor is the concatenation of “memory” and “resistor”, which works as a memory device as well as a resistor in the circuit. The resistance of a memristor varies according to the memristance function of the device. Memristors were first conceptualized in 1970, while the first working prototype was developed in 2008 by HP Development Company, L.P. Since then, the companies are heavily investing on the R&D of memristors. At present, the memristor market is in its nascent phase of commercialization. The first ever working memristor device was introduced in the market by Knowm, Inc. in July 2015. However, this is currently available at a whopping price of $220 in the market only for research purposes. 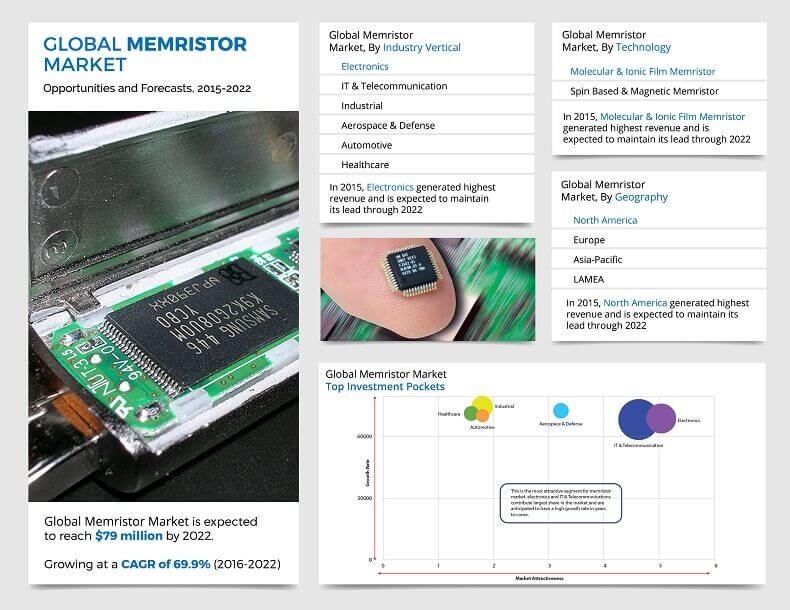 These two properties help memristor to store data and work as an advanced memory component.

Key advantages of memristors, such as, their compact size, very small read & write timing, very high retention, enhanced endurance, and 3D design capabilities, have resulted in their dominance over other memories, and thus memristors are anticipated to emerge as a highly reliable substitute of flash memories during the forecast period.

Memristors are applicable in portable electronics, industrial robotics, supercomputers, servers, and data centers. Electronic and IT & telecommunication industries hold major memristor market share. A key quality of memristors over other memory elements is that it assists electronic device manufacturers to develop devices with neural architecture. The memristor industry is attracting investment from the leading memory manufacturers and semiconductor giants, these investments are anticipated to increase the market share.

Key factors that navigate the growth in the global memristor market size are advantages of memristors over other memories, increase in number of industrial robots, which require memory on large scale, increase in demand of tablets, watches, smartphones and other smart wearable devices, and increase in number of data centers across the globe. However, high initial cost required to manufacture these components and variation of understanding among stakeholders, restrain the growth in global memristor industry. Although growth in trend of Internet of Things (IoT), and growth in demand of neural networks open new opportunities for the players operating in memristor market.

Increase in number of data centers across the globe

The number of industrial robots is on an increase across the globe and the prime reasons include the increase in industrialization and growth in demand of automation in industrial processes. In 2015, the sale of robots across the globe shoot up by over 12% and reached at the highest number of robots sold ever in a year. These industrial robots work without any human interaction and require flash memory to store and execute all the complex instructions to work efficiently. Currently, flash memories are used in these robots however, the traction of memristors is anticipated to increase in industrial robots. Memristors require very less read and write time and they do not require booting up process as they have capability to resume at the value which they had when the power was last turned off. The researches on the memories used inside these robots hold a small portion of memristor market share although, the demand of memristors is expected to increase in industrial robotics in order, to avoid any lagging time in the operation of the robots and to increase their capability to perform more number of instructions per unit time.

Memristor is a component, which offers the feature of resistance as well as memory unit in an electronic circuit. One of the several key qualities of memristors are that they can be used as an analog component as well as a digital component in the same circuit. Memristor industry has emerged as a viable substitute provider of the flash memories across various applications. They have a number of advantages over flash memories, some of these include, less read and write time, high endurance, increased speed, wide operating temperature, and they can keep the value stored in them safe as the power goes off.

The major applications of memristor device include, portable electronic products, automotive vehicles, industrial robots, servers, and data centers. In addition, they are also very useful in neural networking and artificial intelligence. They were first conceptualized in 1970, however, it took 37 years to develop first working prototype of memristors, which was developed by Hewlett-Packard in 2008. Currently, the memristor market is in its nascent phase of commercialization with a less number of players. The key players in the memristor market focus extensively on R&D of the memristors.

Molecular & Ionic Film Memristor account for the majority of memristor market share in the by type segment of the market owing to their wide operating temperature range and application in potential storage class memory. However, in years to come, spin based & magnetic memristor is anticipated to grow with a fast pace owing to increase in their adoption in place of dynamic as well as static RAMs in electronic devices.

Key players in the memristor industry such as HP development company, Knowm Inc., Micron Technology, Inc., and Panasonic Corporation, are engaged in the process of product innovation, collaboration, and acquisition to further expand their services in memristor market across various geographies.