Military drones are unmanned aerial aircrafts that perform a range of missions including intelligence, surveillance, remote sensing, target monitoring, and combat. The operators are referred as drone pilot which control these crafts remotely. Military drones are utilized to collect information on enemy movements, scout during firefights, and can be extremely useful in a manhunt. In addition, military drones are effective as they costs less as compared to traditional military weapons and they have become increasingly accurate. Moreover, the most common unmanned aerial system used in combat is the MQ-1 Predator.

The spread of the COVID-19 pandemic has negatively impacted the global military drone industry. The purchase of defense equipment required related services has been affected due to lack of confidence in the market, resulting in fewer military drone’s business contracts. In addition, defense budget cuts from several countries such as the U.S., India, France and Israel have been observed. For instance, in 2021, the U.S. defense budget was reduced from $712 billion in 2020 to $705 billion in 2021. The major risk factors of the military drone market participants are regulatory & policy changes, dependency on labor, working capital management, and liquidity & solvency management. Majority of the developing facilities of drones has been shut down during the pandemic due to commute restrictions, workforce unavailability, and supply chain disturbance. Private and commercial security industries were one of the most severely affected industries by the pandemic and observed a decline of investments initially. Revenue crunch and rising maintenance costs were two of the major challenges adversely affecting the drone manufacturers. Furthermore, the reduced GDP of major economies such as the U.S., the UK, China, France, India, Germany, and others in 2020 resulted to a decline in investment in the industry. 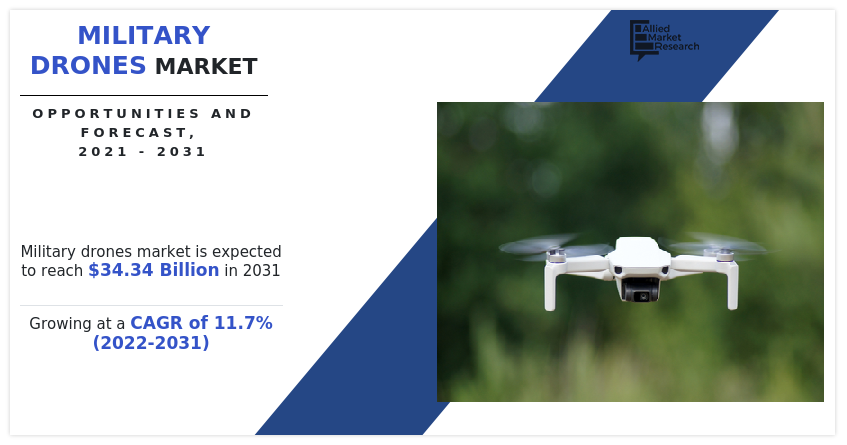 The military drones market is segmented on the basis of type, range, technology, application, and region. By type, it is segmented into fixed-wing, rotary-wing, and hybrid/transitional. By range, it is classified into visual line of sight (VLOS), extended visual line of sight (EVLOS), and beyond line of sight (BLOS). By technology, it is categorized into remotely operated, semi-autonomous, and autonomous. By application, it is fragmented into intelligence, surveillance, reconnaissance, & target acquisition, combat operations, delivery & transportation, and others. By region, the report is analyzed across North America, Europe, Asia-Pacific, and LAMEA.

Rotary wing is projected as the most lucrative segment

The global defense expenditure has seen exponential growth in recent years. As per Stockholm International Peace Research Institute (SIPRI), the global military expenditure has reached $1,981 billion in 2020 with a 2.6% year-on-year increase. To modernize the defense forces in order to tackle the rise in threats of wars and other internal conflicts, many nations are continuously increasing their defense spending in order to purchase and manufacture advanced security solutions. The military expenditure accounted for 2.4% of the global gross domestic product (GDP) in 2020. Thus, an increase in global military expenditure has augmented the adoption of simulation and training technology. Furthermore, advancements of weapons and attacking capabilities worldwide have created the demand for modernization and installation of sophisticated defense infrastructure by governments to be prepared for any unprecedented threats and offensive attacks from foreign countries. Militaries across the globe are investing in the UAV solutions such as drones for effective operations of advanced security systems. Thus, upsurge in military spending is driving the growth of the military drone industry during the forecast period.

Autonomous is projected as the most lucrative segment

The growth in threat from terrorism and increase in security concerns across the globe has led to increased government expenditure for UAVs such as drones. Unmanned aerial vehicle solutions have wide range of applications in military & defense sector for the effective observations of the assets and surveillance of the areas for gaining the optimum operational effectiveness.

UAV or drones can carry out stealth operations, function in nights, operate at any location, and are operational efficient to deploy in various operational conditions. Such benefits have led to increase in investments by governments to procure and develop a large number of UAVs globally. For instance, in September 2021, BAE Systems and Malloy Aeronautics have announced plans to explore the development of an all-electric ‘heavy lift’ unmanned air systems (UAS) as a potential new solution to deliver cost-effective, sustainable rapid response capability to military, security and civilian customers. Moreover, the security of key institutions has been greatly enhanced with advanced video surveillance and access control systems. Unmanned Aerial Vehicles are used for tactical planning and surveillance of major events or gatherings in large cities. Such factors are expected to fuel the growth of the global military drone market during the forecast period.

The military drones market is segmented into Type, Range, Technology and Application.

The global military drones market is expected to witness significant growth owing to enhancement in efficiency and operations offered by military drone systems, across a wide range of applications.

Changing geopolitical situations and evaluation in digital technologies & defense budget outlook are expected to spur the adoption of new high-end technologies at security front. Increase in use of robotics, biotechnology, portable unmanned based solutions, and nanotechnology in cloud computing, communication, surveillance, detection, decontamination, and other activities is expected to transform the military outlook across the globe. Furthermore, unmanned vehicles are used in aerial, ground, and underwater for transportation, communication, and other applications. The modernization of defense solution and change in geopolitical situations are creating demand for development of the operational effective unmanned aerial vehicle (UAV). Growth in focus toward product development with effective compatibility with modern military solutions, market participants are need to focus on R&D activities to cater the changing requirements of the military sector.

In order to gain a fair share of the market, major players adopted different strategies, for instance, partnership, product launch, and product development. Among these, product launch is the leading strategy used by prominent players such as Boeing, Elbit Systems Ltd., Northrop Grumman Corporation, SAAB AB, and Thales Group.

Q1. What is the estimated industry size of military drones?

Q2. Which is the largest regional market for military drones?

A. North America is the largest regional market for military drones.

Q3. What is the leading application of military drones market?

A. The leading application is Intelligence, surveillance, reconnaissance, and target acquisition

Q4. Which are the top companies to hold the market share in military drones?

Q5. What are the upcoming trends of military drones market in the world?

A. The upcoming trends in military drones market include greater adoption in transportation & delivery and development of autonomous drones.