A parachute is a device that slows down an object's motion which is falling through an atmosphere by creating drag. It consists of a fabric canopy beneath which the person or object is suspended. The parachute works through air resistance by forcing air to the front of it, which makes a structured ‘wing’ under where the canopy pilot can fly. Militaries have used military parachutes to deliver soldiers and supplies into action as early as the Second World War. Large military aircraft often drop cargo and supplies over military bases in remote areas using parachutes. Basically, there are different types of parachutes used by the military, such as round parachutes, ram-air parachutes, square parachutes, and others. 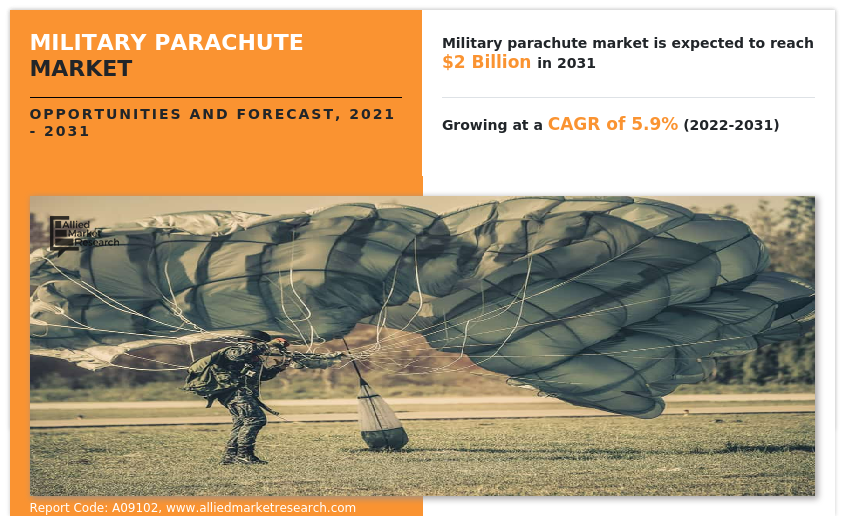 Currently, in the military, parachutes are generally used by paratroopers for combat operations. More advancements in parachute technology are expected to drive the military parachute market during the forecast period. For instance, in February 2022, Russian state Rostec subsidiary Technodinamika tested GPS-guided, automated cargo parachute system called the Juncker-DG-250 system. This parachute uses coordinates provided by a global positioning system to drop loads weighing up to 250 kilograms (551 pounds) from an altitude of up to 8,000 meters (26,246.72 feet) with a maximum landing error of 100 meters (328 feet). The parachute also operates in “slave mode,” following the lead parachutist.

The factors such as growing security concerns due to territorial conflicts and global terrorism and an increase in demand for UAV parachutes in military applications supplement the growth of the military parachute market. However, variation in testing standards & methodologies and lack of skilled forces for operating parachutes are the factors expected to hamper the growth of the market. In addition, rapid technological advancement in parachutes and increasing defense expenditure by governments of major economies creates market opportunities for the key players operating in the military parachute industry.

Cruciform Parachute is projected as the most lucrative segment

Tapes/Webbings is projected as the most lucrative segment

Growing security concerns due to territorial conflicts and global terrorism

Territorial conflicts have historically been the major reason for war, particularly when two governments disagree over specific bits of land. The causes of these kinds of conflicts include a mix of economic and political concerns, normative concerns, and competition for scarce natural resources. Moreover, in the current years, terrorist incidents have increased very drastically since the power of terrorists has improved. For instance, in January 2021, a deadly twin suicide attack hit central Baghdad. In addition, according to the U.S. Department of Homeland Security and the National Consortium for the study of terrorism and responses to terrorism, a total of 8,302 terrorist attacks occurred worldwide, resulting in 25,082 deaths and 19,924 injuries in 2019. For instance, in July 2019, Mills Manufacturing Corp. and Airborne Systems (ASNA) signed a contract worth $249 million with the U.S. Army to deliver personnel parachute systems for current warfare situations. Additionally, the growing security concern among countries due to the increasing territorial conflicts is expected to give rise to the demand for military parachutes across the globe.

Cargo Parachutes is projected as the most lucrative segment

Increase in demand for UAV parachutes in military applications

Subsequently the second world war, militaries employed military parachutes to drop soldiers and supplies into action. Since then, they've been increasingly used in numerous combat zones, particularly by developed country special forces. Advances in airborne technology have also improved the mechanism of action of parachutes, making them safer and more dependable for military parachutists. Manufacturers have progressively embraced the principle of landing aviators safely over time. Further, the military parachute business has been boosted by the UAV parachute recovery technology in numerous domains other than the military. Cargo, sports, rescue, recovery, and break chutes are just a few of the primary application areas. For instance, in January 2019, the e-commerce giant Amazon unveiled its new drone as a part of its ‘Prime Air Programme’ initiative. This drone is designed with the aim of scaling the company’s delivery network efficiently. Thus, the increase in demand for UAV parachutes in military applications is expected to drive the military parachute market.

Parachute testing is available in numerous shapes and forms, and each of them is suitable for different applications. However, varied testing standards & methodologies and flammability standards were not clearly defined to the different suppliers (armies), which use specific standards and testing methods to specify their products (parachutes). For instance, the UK & European Union follow BS EN or BS EN ISO, the U.S. follows ASTM, ISO, or NFPA standards, and other developed nations have their own testing protocols. Therefore, it becomes difficult for manufacturers to supply their products to the global market. Therefore, the variation in testing standards & methodologies is expected to hinder the military parachute market growth globally.

Many new applications of the parachute have been developed in the past decade. Recent advancements in parachute payload technologies, such as advanced payload systems that can be controlled through a smartphone application and others, have fueled an unprecedented level of interest in the defense sector. Furthermore, continuous technological advancements by the players in the industry to improve efficiency and client experience are expected to boost the demand for parachutes in the defense sector. For instance, in February 2022, Russian state Rostec subsidiary Technodinamika tested GPS-guided, automated cargo parachute system called the Juncker-DG-250 system. This parachute uses coordinates provided by a global positioning system to drop loads weighing up to 250 kilograms (551 pounds) from an altitude of up to 8,000 meters (26,246.72 feet) with a maximum landing error of 100 meters (328 feet). The parachute also operates in “slave mode,” following the lead parachutist. Hence, such technological advancement in the parachute system is expected to create a lucrative opportunity for the military parachute industry during the forecast period.

Although the majority of industries have suffered an imbalance in their global supply and demand cycle, short-term contracts in the defense industry are expected to suffer a greater impact, thereby affecting the military parachute market during a pandemic. Due to the government-to-government (G2G) links, long-term contracts, and extensive testing & assessment of defense equipment, the probability of the pandemic negatively impacted the existing business deals. Regions such as North America and Europe are expected to suffer more than the rest of the world due to the greater intensity of the coronavirus outbreak and limitations on the import and export of raw materials and military equipment in these regions. Furthermore, the demand for parachutes has remained steady in the defense sector; however, there has been a dramatic fall in demand from the recreational sector as many end users are still reeling from the effects of the pandemic. This disruption is also continued in 2021, while the demand for civilian-use parachutes is expected to increase in the latter half of the forecast period.

This section provides the opinions of various top-level CXOs in the global military parachute market. The growing market propositions of unmanned aerial vehicles have expanded the avenue in the military parachutes market. Furthermore, the increasing number of regional players in the military parachutes market are consolidating their supply chains. They are collaborating with the defense agencies to meet the procurement requirements. Most aspiring players in the military parachute market have expanded the technical expertise underlying parachute design and manufacturing. For instance, in June 2020, Mills Manufacturing was awarded a $150 million contract by the U.S. Army to supply its MC-6 personnel parachute systems. The MC-6 parachute system was equipped with deep brake backup, speed control, and turning mechanisms to allow for easy dropping to the desired locations.

Furthermore, governments of developed and developing countries such as India, China, Russia, the U.S., and others are significantly spending on military modernization programs, which results in an increase in the use of unmanned aerial vehicles for ISR activities, altogether spurring the demand for military parachutes. For instance, in January 2022, the U.S. Navy signed a five-year contract with BAE System for lifecycle management and sustainment of the U.S. Navy’s command, control, communications, computers, combat systems, intelligence, surveillance, and reconnaissance (C5ISR) systems. Also, in January 2022, the U.S. Army Communications-Electronics Command (CECOM) signed a $518 million contract with General Dynamics Information Technology (GDIT), a business unit of General Dynamics Corporation, for logistics, sustainment, and maintenance services. These activities are expected to create opportunities for the military parachute market over the forecast period.

Among the analyzed regions, North America is the highest revenue contributor, followed by Asia-Pacific, Europe, and LAMEA. On the basis of forecast analysis, Asia-Pacific is expected to lead during the forecast period due to rising military expenditure in developing nations and the growing number of training programs for operational units in the militaries.

Q1. What is the estimated industry size of military parachute?

Q2. Which are the top companies to hold the market share in military parachute?

Q3. Which is the largest regional market for military parachute?

A. North America is the largest regional market for Military Parachute

Q4. What is the leading application of military parachute market?

A. Usage of personnel parachutes are the leading application of Military Parachute Market

Q5. What are the upcoming trends of military parachute market in the world?

A. Introduction of round type parachute are the upcoming trends of Military Parachute Market in the world