The North America patch cable market was valued at $ 871.9 million in 2017, and is projected to reach $ 2,396.3 million by 2025, registering a CAGR of 12.3% from 2018 to 2025.Patch cable is a general term for cabling that connects two electronic devices to each other, typically in a network. These devices include computers and other hardware. Patch cables are also used to carry telephone, audio, and video signals between devices in non-networked applications; these might include equipment such as headphones and microphones. 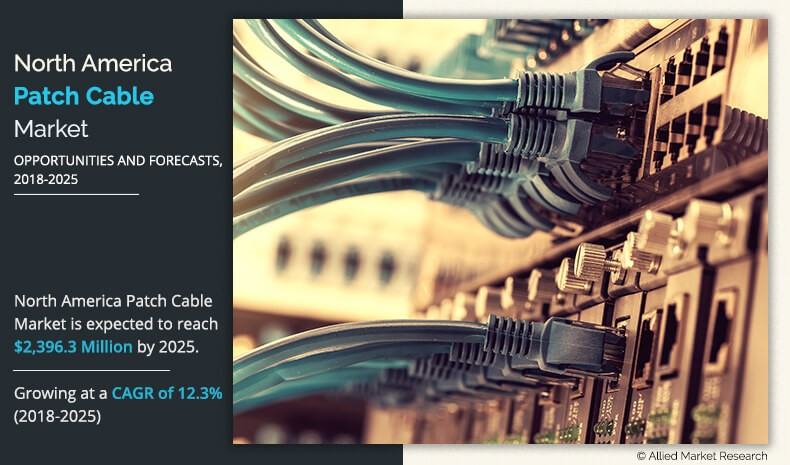 Patch cables can be short as three inches or longer than a hundred feet. Cat 5, Cat 5E, and Cat 6 Ethernet cables are  commonly used to connect computers together in a network as well as network servers.At present, data transfer and networking has become an essential part of all commercial activities in industries, business, broadcast, and others. These commercial activities generate large amounts of data daily, which needs to be transferred between devices with appropriate security. Thus, patch cables are used for networking and non-networking connections in industries. Patch cables are the most popular and reliable technology for residential, institutional, healthcare, IT & network security, and enterprise users as they are easy to install, secure, and exhibit various benefits over other connecting techniques. Patch cables enhance the performance of connected devices via high-speed data transfers. In addition, these cables have several benefits such as lower latency, low noise interference, easy installation, and reliability.

The North America patch cable market segmented on the basis of product type, cable category, application, end use, and country. Based on product type, the market is bifurcated into copper cable and fiber optic. By cable category, the market is divided into CAT3, CAT5, CAT5E, CAT6, CAT6A, CAT7, multimode optical fiber, RG6, and others. By application, the market is divided into networking and non-networking. Based on end use, the market is categorized into industrial, enterprise, broadcast, IT & network security, and others. The North America patch cable market analysis is provided with its prominent countries.

The factors such as increase in demand for high-speed connectivity devices and system, improved cable technology, negative impact of internet-of-things, rise in development of data centers, and emergence of 5G revolution are expected to significantly affect the growth of the North America patch cable market size. These factors are anticipated to either drive or hamper the North America patch cable market growth. 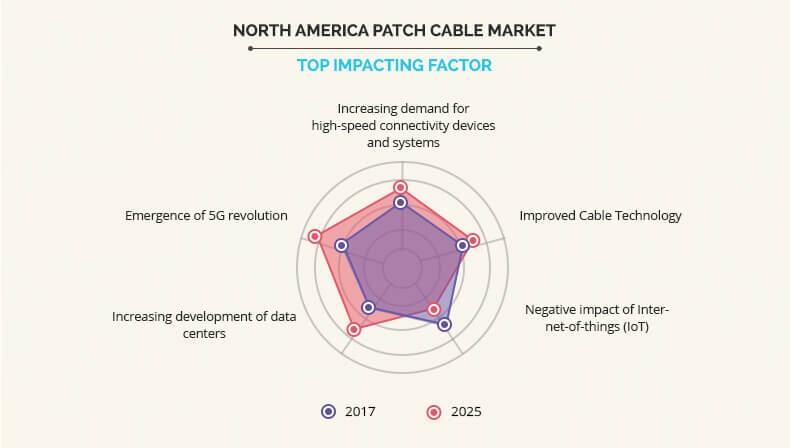 High-speed connectivity devices and systems are gaining popularity among the industrial applications to cater to the need for smooth and secure transmission of data. The use of high-speed networking lines helps the manufacturing facilities to analyze real-time data and improvise the production processes accordingly. For many connected devices such as networked surveillance cameras or IP cameras, two connections are needed, which include electrical connection and the actual network connection. Patch cables provide several common techniques to transmit PoE cabling, which is expected to provide lucrative opportunities for the North America patch cable market growth.

Owing to the development of technology, the concept of Internet of Things has evolved, thus, exponentially increasing number of devices connected to each other. This is expected to result in failure of wired networking, as it is not feasible to connect numerous devices through a wired network, which restrains the North America patch cabe market growth.

Increase in development of data centers

The world is increasingly becoming connected and digital. The increase in need of cloud storage has resulted in a large volume of data centers around the world, which in turn consume a huge amount of data. A data center centralizes an organization’s IT operations and equipment. Data is stored, managed, and disseminated across a variety of devices. It houses computer systems and associated components such as telecommunications and storage systems. According to estimates, there are 2,510 American data centers, which are mostly located on the Atlantic Seaboard. Patch cables are required in data centers to form connectivity between peripheral devices. AC/DC power, ground, copper, and fiber optic are the main types of network cabling used in data centers. Therefore, increase in development of data centers in the region increases the demand for patch cables to form connectivity and networking, which provides lucrative opportunities for the north America patch cable market share expansion in the region.

Recently, the North American patch cable market was majorly driven by the development of technologically advanced industries, increased adoption of fiber-optic cables, and rise in broadcast applications. The presence of key market players in this region is one of the key growth factors of this market. In addition, advanced technologies used in industries and broadcast applications of Ethernet cables are expected to fuel the growth of the patch cable market in this region.

An optical fiber is a flexible, transparent fiber made by silica or plastic. A protective coating of one or two layers of cushioning material (such as acrylate) is used to reduce cross talk between adjacent fibers and the loss-increasing micro bending that occurs when fibers are pressed against rough surfaces. Researchers from RMIT University Australia have developed tiny readers that can detect information in light spirals. By twisting light into a spiral, engineers have created a third dimension for light to carry information. The technology could be used to upgrade fiber optic networks in Australia’s national broadband network.

These key players have adopted strategies such as product portfolio expansion, mergers & acquisitions, agreements, geographical expansion, and collaborations to enhance their market penetration.