Pilates & yoga studios offer workout sessions with instructors, providing coaching and motivation needed to achieve fitness. Pilates focuses on core strength, awareness of breath, and alignment of the spine, while yoga is an entire compendium of exercises designed to stimulate and rejuvenate the entire body. 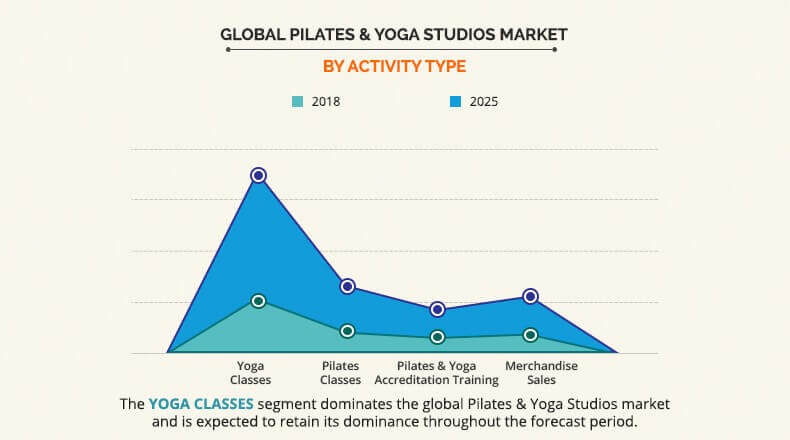 The yoga classes segment occupied the highest market share as yoga is known to counter-balance the stressful and overworked lifestyle, which lacks proper exercise and relaxation. The Pilates classes segment is the second most preferred exercise, owing to the associated benefits for strengthening muscles. The Pilates & yoga accreditation training center provides clients with professional certified trainers to carry out the exercise in a disciplined manner. Whereas, the merchandise segment covers the revenue generated through sales of various accessories that are used in yoga and Pilates activity. 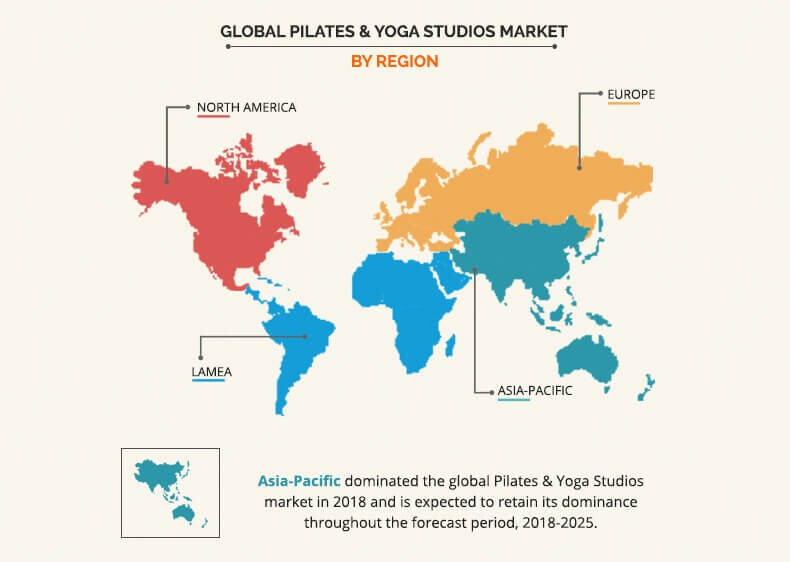 U.S. held nearly two-fifths share of the global market in 2017. The popularity of yoga and its practice is visible in many ways, such as the sheer number of yoga studios in the U.S., along with the sale of yoga gear at various yoga studios. Also, the number of American yoga practitioners has increased to over 36 million in 2016, increasing from 20.4 million in 2012.

There has been an increase in the interest in yoga and Pilates over the past two decades, driven by fitness trends and rise in awareness of alternative health practices in the U.S. There is a surge in the number of studios offering classes owing to rise in consumer interest. Consequently, the number of industry studios is expected to increase during this period. This growth has been a result of the increase in popularity of Pilates and yoga among the U.S. population. According to the data provided by the Sporting Goods Manufacturers Association, yoga participation has increased about five times, over the past few years. Furthermore, while the majority of yoga and Pilates participants are women, participation rates among men have increased over the five-year period, thus boosting industry growth.

The market is highly fragmented and has a very low market share concentration. Most players operate in limited number of locations to cater the growth of the local market. There has been an increase in the industry concentration over the past five years. The consolidation, has largely occurred as larger companies expand, opening at new locations and acquiring existing studios to grow their existing customer base and enter new regional markets. In addition, annual/quarterly membership plans have become quite popular, stabilizing revenue for the service providers.

The Pilates & yoga studios market experiences continuous growth among the people across the. The studios provide fitness sessions coupled with coaching and motivation needed to achieve fitness and other health benefits. It focuses on core strength, along with stimulating and rejuvenating the entire body.

Growth in health awareness related to Pilates & yoga, promotional events by celebrities, and several government initiatives are the factors expected to drive the growth of the Pilates & yoga studios market. However, presence of gym, fitness centers, and other alternative facilities is anticipated to hamper the market growth globally.

The yoga classes segment is the top investment pocket owing to several health benefits including both physical and mental health. Also, this sector is anticipated to grow at the highest growth rate during the forecast period. Based on region, the market is analyzed across North America, Europe, Asia-Pacific, and LAMEA. Asia-Pacific generated the highest revenue in 2017. Increase in adoption of Pilates & yoga practices is largely attributed to consumers inclination towards healthy living and government initiatives such as International yoga day and organizing yoga campaigns by influential yogis such as Ramdev Baba in the Asia-Pacific region.