Get detailed COVID-19 impact analysis on the Portable Generators Market

Portable Generators are used to generate electric power in domestic, commercial, and industrial applications. Generating electricity for live commercial events, electrifying machinery in construction sites, additional power supply during power outage, and others are the applications covered in the study. The global market for portable generators industry was valued at $3,146 million in 2015, and portable generators market size is estimated to grow at a CAGR of 6.6% to reach $4,913 million by 2022. 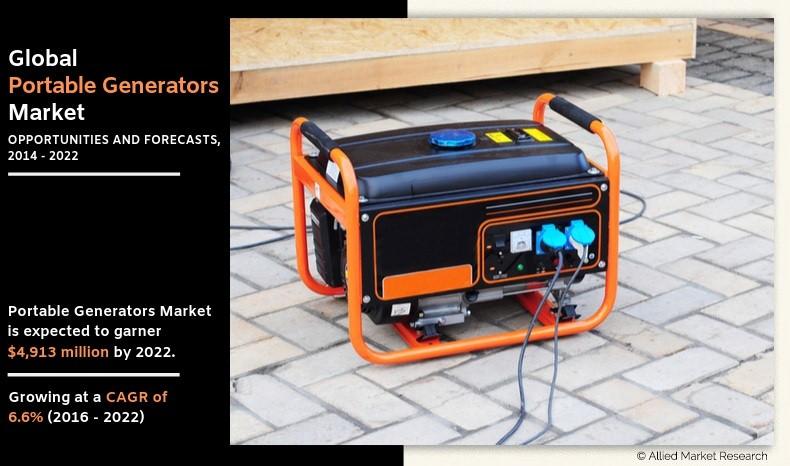 The global portable generators market is segmented based on fuel type, power output, application, and geography. Based on power output, the market is bifurcated into less than 3kW, 3-10kW, and more than 10kW, while the application segment consists of domestic, commercial, and industrial. Based on geography, the portable generators market is analyzed across North America, Europe, Asia-Pacific, and LAMEA. North America generated the highest revenue in 2015. 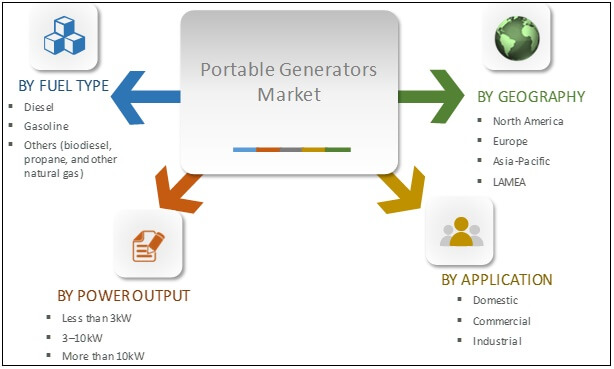 Natural gas-fueled generators gain traction with the evolution of stringent environmental norms to control embosom of hazardous gasses from diesel generators in developed regions such as North America, Europe, and some parts of Asia-Pacific. In addition, many developing nations such as India, Singapore, and Russia use natural energy sources in generators, hence providing a good space for portable generators market growth.

Stringent environmental regulations toward emission of hazardous gases, such as carbon monoxide, carbon dioxide, nitrous oxide, and others, from generators hamper the growth of the market. Several regulatory bodies such as the California Environmental Protection Agency, United States Environmental Protection Agency, Central Pollution Control Board (India), and others have set guidelines to restrict hazardous pollutants from diesel generator exhaust systems.

Key Players Profiled in the Report

Other Market Players Mentioned in the Report

The adoption of portable generators has increased in domestic and commercial applications over the years. Commercial events of mass gathering in under-developed and developing regions including Asia-Pacific, Latin America, Middle East, and Africa demand additional power generating portable generators due to interrupted electric supply networks and regular power outages. In addition, portable generators are on high demand from recreational activists, travelers, and county side tourists for need of power at remote places.

Portable generators market in Asia-Pacific, China, and India possess high market potential, and is projected to increase at a significant rate owing to power backup need in several construction sites as these countries are involved in rapid industrialization and infrastructure development.

Portable generators offer power need in multiple application areas including domestic, commercial, and industrial. The variable nature of portability gives right choice to the end-users fulfilling their power need in both in-door and out-door activities. However, the demand for standby and battery power inverters is at a steady rise, which is expected to challenge the portable generators market growth in the coming years.