As economic shortcomings complicated efforts to bring electricity to every corner of the planet, powership was in demand so that it can be set offshore and plugged into local grids at short notice. Thus, during the pandemic, powership played an important role and had a very low impact on market growth. The demand-supply was met through powership in many remote areas that lacked electricity and utility infrastructure or suffered power outages for a longer time. 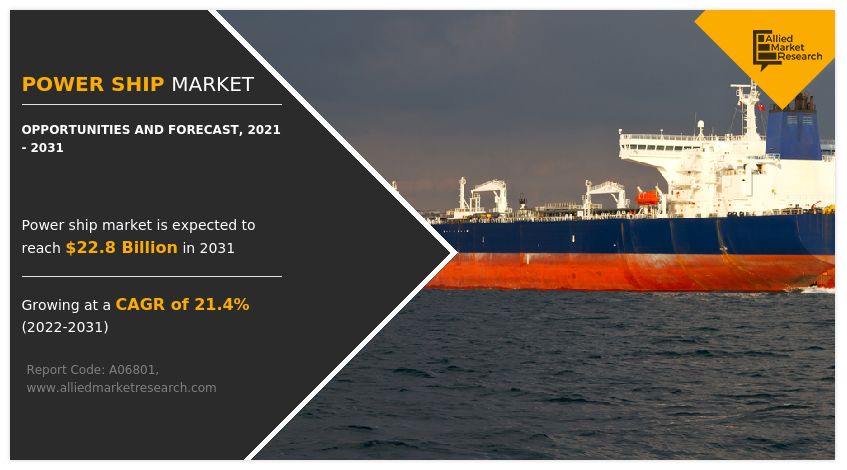 A powership specifically refers to a special-purpose ship, which inhibits a power plant that will serve as a source for power generation. A ship is modified for generating power or a marine ship/vessel can be installed with a power plant. This can be done to cater to the rising demand for electricity. There are some powership built in recent times that are self-propelled. They also inhibit ready infrastructure so that they can be used easily in developing nations. They can be connected to any country’s electricity grid based on requirements. They are also referred to as power barges and can be decked on ports. They are also known as "barge-mounted power plants" or "floating power plants". One of the earliest powership was the SS Jacona, converted in 1931 by the Newport News Shipbuilding and Drydock Company of Virginia for the New England Public Service Company of Augusta, Maine. Saranac was a 1942-built fleet oiler before her conversion into a powership following the Second World War to serve in the US Navy and Army. The first floating nuclear reactor ship was the MH-1A, used in the Panama Canal zone from 1968 to 1975

Powership is a reliable fast track, plug & play, and effective solution that delivers electricity in 30 to 100 days. It is also highly efficient using the most economical fuel available in the market and with higher efficiency compared to similar solutions that lead to an economical generation cost. The rise in demand for primary energy has led many nations and the private sector to opt for powership and thus creating future opportunities for global powership market growth. The powership can be used mainly by local & national governments & ministries, energy, oil & natural resources, electrical utility companies, national & state private sector, and mining companies. They can be hired and quickly deployed to utility-grade power plants and can be taken under electricity generation services contracts, power rental contracts, energy conversion works contracts, and power purchase agreements.

The rise in demand for electricity in developing countries is attracting significant investment in the power generation sector. According to BP Statistical Review of World Energy, 2021, global primary energy demand rose by 6% with electricity generation rising by 6.2%. Powership is a reliable option for generating power. It has wide applications in regions that lack power generation infrastructure. The aforementioned characteristics act as a driving factor for the global powership market size. Rising demand for electricity has led the world to look out for options that are economic, efficient, sustainable, require minimum maintenance, and are environmentally friendly. This has led to a rising demand for electricity through powership which is readily available on demand and thus, augments the market growth. Moreover, rising demand from end users due to enhanced fuel flexibility acts as a driving factor for the global powership market growth.

The global powership market forecast is done on the basis of type, system, application, and region.

Fully Electric is projected to be most lucrative.

Depending on the type, the market is divided into fully electric, hybrid, and plug-in hybrid. A hybrid powership is one that can offer electricity generation and even conversion in some cases and/or any combination of mentioned uses. They are both gas-fired and oil-fired, that is they use both oil and gas to generate electricity. Such factors led to the growth of hybrid powership and are projected to grow at a higher CAGR.

Power conversion is projected to row at a higher CAGR.

On the basis of the system, the division of the market is done into electricity storage, power conversion, power generation, and others. The power conversion segment dominated the powership market share and is further projected to grow at a higher CAGR owing to its capability to generate electricity whereas, other kinds of powership can only store, convert and/or transport electricity. Thus, acting as a driving factor for power generation global powership market growth.

The defense segment is projected to offer a lucrative opportunity.

By application, the market bifurcation is done into commercial and defense. The defense segment dominated the market share and the same is expected to grow at a higher CAGR owing to high demand from defense activities that occur in remote areas. Moreover, countries with continued civil and internal unrest and military interventions also require service from powership to help in meeting electricity demand.

LAMEA is projected to grow at a higher CAGR.

According to the global powership market trends, the COVID-19 pandemic has severely impacted the global transmission and distribution networks as projects have stalled, which, in turn, led to a significant decrease in demand for defense. The emergence of COVID-19 has declined the growth of the global powership industry in 2021 and is estimated to witness slow growth till the end of 2021. The implementation of partial or complete lockdowns across various countries globally is the prime reason for this decline in the growth rate. As industries were temporarily shut, it reduced the need for maintenance from various defenses. The instances of the spread of new variants of the virus resulted in repeated travel and trade bans, which further impacted the global economy. The economies that are neighbors to the origin country have suffered huge losses and have later shown positive recovery. However, the Omicron variant, known to be more infectious, is again creating concerns regarding the uncertain future of the global economy and the powership market. As economic lockdowns complicate efforts to bring electricity to every corner of the planet, powerships are putting generation units on ships that can sit offshore and plug into local grids at short notice.

The global powership market is consolidated in nature and is expected to grow at a high rate during the forecast period. This is attributed to the rising demand for energy. The increased emphasis on boosting energy installed capacity is prompting nations to invest in powership and power barges in addition to strengthening electricity transmission and distribution networks. The demand of the time is also to promote and accelerate electrification projects, which will further promote the powership market growth for infrastructure activities and operations. The market growth is hampered by fluctuations in oil prices as most powerships are oil-fired. Since powerships lack efficient renewable sources of input or energy sources for themselves, developing such can offer various opportunities for powership market growth without worrying about carbon emissions

Q1. What are the upcoming trends of Power Ship Market in the world?

A. The increased number of electronic devices, the rise in electrification in the transport and heating sector, and the digitalization era has raised the demand for electricity and resulted in market growth.

Q2. What is the leading application of Power Ship Market?

A. The commercial segment is leading application for powership market.

Q3. Which are the top companies to hold the market share in Power Ship?

Q4. Which is the largest regional market for Power Ship?

A. LAMEA is the largest regional market for powership.

Q5. What is the estimated industry size of Power Ship?

A. The estimated industry size is approximately $22.8 billion