The global rabeprazole sodium market was valued at $615.7 million in 2021, and is projected to reach $895.9 million by 2031, growing at a CAGR of 3.8% from 2022 to 2031. Rabeprazole is used to treat duodenal ulcers, Zollinger-Ellison syndrome, and gastroesophageal reflux disease (GERD). In addition, it can be used in conjunction with medications to treat ulcers caused by H. pylori bacterial infections (such as amoxicillin and clarithromycin). Rabeprazole, a proton pump inhibitor (PPI), lessens the amount of stomach acid produced. It inhibits the gastric H+/K+ATPase (hydrogen-potassium adenosine triphosphatase) at the secretory surface of the gastric parietal cell.

The rabeprazole sodium market had a moderately positive impact during the lockdown period owing to a surge in gastrointestinal diseases, consumption of junk foods, and beverages which led to its usage. 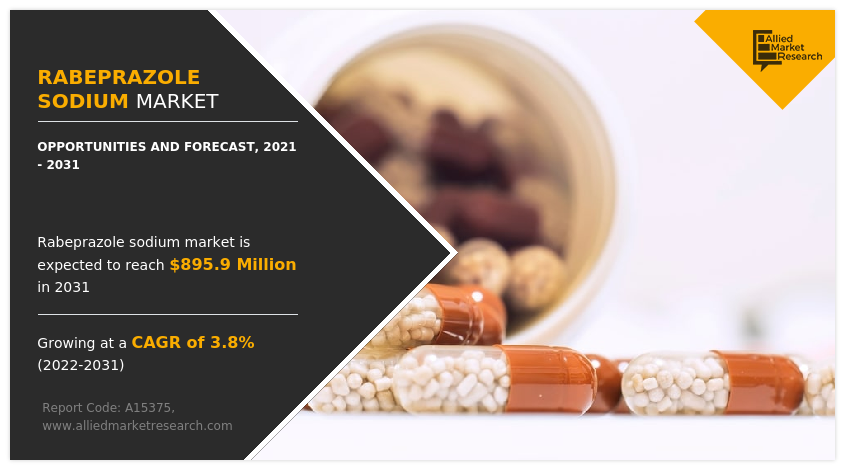 Historical overview
The market was analyzed qualitatively and quantitatively from 2021-2031. The rabeprazole sodium market grew at a CAGR of around 4.6% during 2022-2031. Most of the growth during this period was derived from the Asia-Pacific owing to the improving health awareness, rising disposable incomes, as well as the well-established presence of domestic companies in the region.

Market dynamics
The amount of acid produced by your stomach is decreased by rabeprazole. Heartburn, acid reflux, and gastroesophageal reflux disease are all commonly treated with it. GORD is when acid reflux occurs repeatedly. Additionally, stomach ulcers can be prevented and treated with rabeprazole. Thus, increase in prevalence of digestive problems drives the market growth. According to the National Library of Medicine, GORD is one of the most common gastrointestinal disorders, with a prevalence of approximately 20% of adults in western culture. A systematic review by El-Serag et al. estimated the prevalence of GERD in the US between 18.1% to 27.8%. Thus, increase in digestive system disorders drives the rabeprazole sodium industry.

The gastrointestinal (GI) systems of senior persons constantly undergo changes, and while some GI issues are more prevalent in this age range, no GI disorder is unique to the elderly. While some of the changes to the GI system brought on by aging are physiological, others are pathological and are more prevalent in adults over the age of 65. Even though the prevalence of gastroesophageal reflux disease (GERD) increases with age. For instance, according to the Organization for Economic Co-operation and Development (OECD), the elderly population is defined as people aged 65 and over. The total percentage of the elderly population in 2020 for Japan was the highest in the world at about 28.8%. Thus, surge in the geriatric population along with foreign investments in this region propels the rabeprazole sodium industry.

In the present period, people's lifestyles are rapidly changing; they are going toward a new, unhealthy way of life that includes an unhealthy diet. An increasingly inadequate diet is the cause of an increase in digestive and intestinal issues. Gastrointestinal disorders can be effectively treated with rabeprazole sodium. Eating a diet low in fibre, not getting enough exercise, travelling or other routine changes, consuming a lot of dairy products, stress, and other lifestyle changes are some of the factors that contribute to digestive difficulties. The market is growing as a result of the rise in gastrointestinal disorders brought on by peoples' changing lifestyles. For an instance, according to national library of medicine Approximately 50% (over 3 billion) of the world populations are known to be infected with Helicobacter pylori, mainly in the developing countries. Among those, hundreds of millions of people develop peptic ulceration during their lifetime and still tens of millions might progress to gastric cancer. Thus high incidence of stomach infections propels the rabeprazole sodium market opportunity.

According to National Institute of Diabetes and Digestive and Kidney Diseases (NIDDK). GERD can affect any child. Children who are obese, overweight, or have a big waist size are more likely to have GERD. GERD is also more prevalent in children who have certain diseases that affect the oesophagus, neurological system, or lungs. Increase in consumption of acidic foods, adoption of unhealthy lifestyle is the major factor in this age group that drives the market. Eating lifestyle has a significant influence on digestive health of human beings. The global population regardless of gender follow unhealthy lifestyle and encounter illness and other health issues. Some of the worst foods known for digestion include fried foods and artificial sugars. In addition, intake of alcohol can increase chances of heartburn. According to Southgate Medical Centre, in Australia, 35% of an average adult’s daily energy intake and 41% of children’s daily energy intake comes from junk food. Hence, inclusions of unhealthy lifestyle drive the rabeprazole sodium market growth.

Workflows in the healthcare industry have been affected worldwide by the COVID-19 pandemic. The disease has compelled a number of industries, including a number of areas of health care, to temporarily close their doors. Currently, morbidity and death is prevented or reduced by vaccination, but essential public health interventions (test, track, isolate, and treat) and COVID-appropriate social behavior must still be practiced. the COVID-19 outbreak is anticipated to have a negative impact on the growth of the global rabeprazole sodium market. Moreover, the lockdown led to disruption of manufacturing and transportation of healthcare essentials. Furthermore, other factors responsible for the impact on the market include limited availability of medical care, shortage of healthcare staff, and rise in burden of COVID-19 related hospitalization

Segmental Overview
The global rabeprazole sodium market is segmented on the basis of application, age distribution channel, and region. On the basis of type, the market is categorized into gastroesophageal reflux disease treatment, duodenal ulcer treatment and others. By distribution channel, it is segmented into hospital pharmacies, drug & retail store and online providers. Region-wise, it is analyzed across North America, Europe, Asia-Pacific, and Latin America, the Middle East, and Africa (LAMEA).

Gastroesophageal reflux disease segment dominated the market in 2021, and is expected to be lucrative during the forecast period

Based on age the market is segmented into below 55 years and Above 55 years. The below 55 years segment dominated the rabeprazole sodium market size in 2021 and is expected to witness highest CAGR during the forecast period owing to rise in consumption of acidic foods, adoption of unhealthy lifestyle is the major factor in this age group. In addition, intake of alcohol can increase chances of heartburn in this age group further drive the market growth.

Below 55 years segment dominated the market in 2021, and is expected to be lucrative during the forecast period

Drug and retail store pharmacies segment dominated the market in 2021, and Online providers segment is expected to be lucrative during the forecast period

Asia-Pacific expected to grow at the highest rate during the forecast period. The market growth in this region is attributable to presence of pharmaceutical companies in the region as well as growth in the purchasing power of populated countries, such as China and India. Moreover, rise in medicine expenditure and adoption ofhealthy lifestyle, drive the growth of the market. Furthermore, the Asia-Pacific region exhibits the largest medicine supply and the largest pharmaceuticals industry with availability of raw material in abundance, which can be easily accessed by manufacturers of rabeprazole sodium. This, in turn, drives the growth of the market. Asia-Pacific offers profitable opportunities for key players operating in the rabeprazole sodium market, thereby registering the fastest growth rate during the forecast period, owing to the growing infrastructure of industries, rising disposable incomes, as well as well-established presence of domestic companies in the region. In addition, rise in contract manufacturing organizations within the region provides great opportunity for new entrants in this region.

North America dominated the market in 2021, and Asia-Pacific is expected to be lucrative during the forecast period

Acquisition: In November 2021, AcipHex delayed-release tablets were acquired from Eisai Co., Ltd. by Woodward Pharma, a specialised pharmaceutical firm with headquarters in Michigan with a focus on purchasing, licensing, and commercializing branded and generic pharmaceuticals for the American market. In accordance Woodward has rights to sell AcipHex in the U.S.

Q1. What are the upcoming trends of Rabeprazole Sodium Market in the world?

A. People's lifestyles are rapidly changing; they are going toward a new, unhealthy way of life that includes an unhealthy diet. An increasingly inadequate diet is the cause of an increase in digestive and intestinal issues. Gastrointestinal disorders can be effectively treated with rabeprazole sodium.

Q2. What is the leading application of Rabeprazole Sodium Market?

A. The gastroesophageal reflux disease is the leading application of rabeprazole sodium market.

Q3. Which are the top companies to hold the market share in Rabeprazole Sodium?

Q4. Which is the largest regional market for Rabeprazole Sodium?

A. North America is the largest regional market for rabeprazole sodium market.

Q5. What is the estimated industry size of Rabeprazole Sodium?

Q6. What is the base year of Rabeprazole Sodium?

A. 2021 is the base year of rabeprazole sodium market.

Q7. What is the forecast period of Rabeprazole Sodium?