The COVID-19 impact on the rockets and missiles market is unpredictable, and is expected to remain in force for a few years. The COVID-19 outbreak forced governments across the globe to implement stringent lockdown and ban import–export of raw material items for most of 2020 & few months in 2021. This led to sudden fall in the availability of important raw materials for manufacturing rockets, missiles and other components. Moreover, nationwide lockdown forced rockets and missiles manufacturing facilities to partially or completely shut their operations. Adverse impacts of the COVID-19 pandemic have resulted in delays in activities and initiatives regarding development of advanced rockets and missiles components globally. 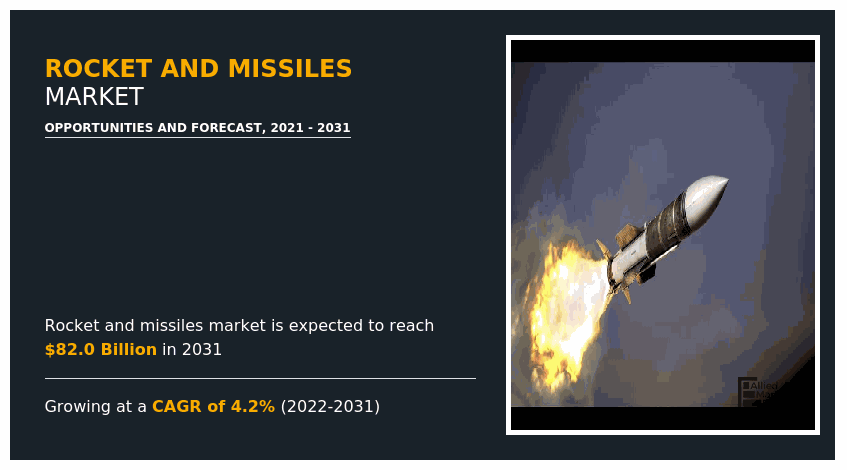 The rocket and missiles market is segmented into Speed, Product, Guidance and Platfrom.

Rockets and missiles are intended to deliver explosives to a specific target. The primary distinction is that missiles have a guidance system to help them reach their intended target. On the other hand, rockets come with a lack of guidance system and are merely launched in the general direction of the primary target. Sometimes in military terminology, a missile might also be called a “guided rocket”. Even while rockets and missiles appear similar on the surface and were ultimately built with the same aim in mind to deploy explosives to enemy positions, they are not the same in terms of engineering and have several variances. In addition, the trajectory of the objective is highly determined for both missiles and rockets, missiles have a better chance of reaching their goal than rockets due to the in-built navigation system.

The rockets and missiles market is expected to experience significant traction during the forecast period, which is driven by the increasing territorial conflicts, the rising need for advanced rockets and missiles to counter the modern combat around the country’s border, and the growing defense budget of emerging economies. However, strict regulations related to arms use and transfer, and high-cost associated with rocket and missile technology are the factors that are anticipated to hamper the growth of the rockets and missiles market during the forecast period. On the contrary, the rise in the adoption of hypersonic missile systems and the growing preference for automatic target recognition (ATR) missile systems are the major factors that are expected to supplement the market, thereby providing a better opportunity for the market growth during the forecast period.

Rocket and Missiles Market By Speed

Hypersonic is projected as the most lucrative segment

Most territorial conflicts are obtained due to dominance or supreme authority by nations over natural resources such as fertile farmland, rivers, minerals, and petroleum resources. For instance, Japan and China each claim a range of islands in the East China Sea. In Japan, they are known as the Senkaku Islands, and in China, they are known as the Diaoyu Islands. As a result, tensions between the two countries have escalated. In addition, one of the most important areas of conflict in the Middle East is the unsolved dispute between Israelis and Palestinians. Rival claims to the territory between Jordan and the Mediterranean are at the heart of the conflict. Moreover, Territorial conflicts are a key cause of wars and terrorism, as nations frequently strive to exert their authority over an area through occupation, while non-state forces try to influence the acts of governments through terrorism. In addition, due to the rise in such instances and territorial conflicts, many nations improved their border security and surveillance capabilities with advanced weapons systems, missiles, and anti-missile systems and deployed missiles in civil wars for territorial acquisition. For instance, in April 2022, Russia expanded the scale of its missile strikes on Kyiv in response to Ukrainian forces' attacks or sabotage on Russian territory. In addition, in September 2020, the conflict between Armenia and Azerbaijan over the disputed Nagorno-Karabakh region included the heavy use of missiles, drones, and rocket artillery. Such growing adoption and deployment of rockets and missile systems in territorial conflicts are anticipated to propel the growth of the market during the forecast period.

Rocket and Missiles Market By Product

Cruise Missiles is projected as the most lucrative segment

Governments of countries such as Russia, the U.S., China, India, and others are increasing investment in arm forces to establish dominance on the battlefield. According to Stockholm International Peace Research Institute (SIPRI), total global military expenditure rose to $1981 billion in 2020, an increase of 2.6 percent from 2019. In addition, the rise in terrorist activities and civil activities in several regions and the rise in international conflicts force countries to enhance their military strengths through advancements in weapons capabilities, which increase the demand for self-guided missiles and rockets.

Moreover, Governments of developed and developing countries such as India, China, Russia, U.S., and others are significantly spending on military modernization programs to improve their firepower and upgrade their weapons & surveillance capabilities. For instance, in October 2021, the Norwegian Defence Materiel Agency (FMA) signed a contract with Kongsberg Gruppen to order naval strike missiles (NSM) and life extension of the existing inventory of NSM. Also, in October 2021, the Norwegian Defence Materiel Agency (NDMA) signed a contract to order Joint Strike Missile (JSM) for Norway’s fleet of F-35A Lightning II fighter aircraft. In addition, in March 2021, U.S. Army signed a $1.12 billion contract with Lockheed Martin Corporation for Lot 16 production of Guided Multiple Launch Rocket System (GMLRS) rockets and associated equipment. These activities are expected to create opportunities for the rockets and missiles market during the forecast period.

Furthermore, an increase in programs of armed forces by major economies impacts the rise in the use of missile and rocket systems, which are expected to supplement the growth of the rockets and missiles market. In November 2021, the U.S. Army entered into collaboration with Lockheed Martin Corporation for the PAC-3 program. Under this program, two PAC-3 MSE missiles successfully engaged with the U.S. Army Integrated Air and Missile Defense Battle Command System (IBCS). Thus, increasing investments in missile and rocket development by major economies are expected to propel the growth of the market over the forecast period.

Rocket and Missiles Market By Guidance

Guided is projected as the most lucrative segment

Strict regulations related to arms use and transfer

The existing restrictions do not adequately regulate the arms regulations imposed on import and export trade, since illegal arms accumulation remains a concern. The main restraints that are expected to impede the growth of the rockets and missiles market are arms control committees, problems associated with regulating the arms trade, emphasizing the complexity of the interests involved in the emergence of advanced arms as the most promising weapons, and black and grey markets in terms of inefficient trade regulations. In addition, the Missile Technology Control Regime (MTCR), is an informal political understanding among 35 member states that seek to limit the proliferation of missiles and missile technology. The MTCR's goal is to reduce the dangers of weapons of mass destruction (WMD) including chemical, nuclear and biochemical missiles proliferation by limiting exports of products and technologies that could contribute to delivery methods (other than manned aircraft) for such weapons. In this respect, the Regime focuses a particular emphasis on rockets capable of carrying a payload of at least 500 kg across a range of at least 300 km, as well as the associated equipment, software, and technology. Such authorities implement regulations on arms and weapon transport and use are expected to hinder the growth of the market.

Moreover, the major factor that hinders the rockets and missiles market includes the restrictions and regulations by several governments for rocket and missile systems. For instance, the 15 CFR 744.3 rule by the U.S. government for restrictions on certain rocket systems including ballistic missile systems & sounding rockets, and unmanned air vehicles including cruise missile systems, target drones, and reconnaissance drones end-uses. Such regulations are anticipated to hamper the growth of the market during the forecast period.

Rise in the adoption of hypersonic missile systems

Rocket and Missiles Market By Platfrom

Airborne is projected as the most lucrative segment

Rocket and Missiles Market By Region

Asia-Pacific is projected as the most lucrative segment

In the recent years, terrorist activities have increased, as have territorial tensions that have led to rise in confrontations with neighboring countries, resulting in short-range battle circumstances, which creates the need for advanced warfare technologies. The electronics put into ordinary missiles and rockets can be monitored with ease due to enhanced detecting techniques. As a result, countries must constantly improve their rocket and missile technology to distinguish themselves during the battle scenarios. In addition, governments from various underdeveloped countries have purchased technologically superior rockets and weapons. For instance, in November 2020, Hungary Republic signed a contract with Kongsberg Gruppen and Northrop Grumman Corporation for the National Advanced Surface-to-Air Missile System (NASAMS). Such factors are expected to fuel the growth of the market during the forecast period.

Moreover, the rocket and missile market is expected to witness significant growth due to the missile development programs organized by developed and developing nations. For instance, in May 2022, Russia and China started developing advanced cruise missiles that can be launched from aircraft, ground launchers, and ships or submarines, along with hypersonic missile capabilities. In addition, in November 2021, the U.S. Army entered into a collaboration with Lockheed Martin Corporation for the PAC-3 program. Under this program, two PAC-3 MSE missiles successfully engaged with the U.S. Army Integrated Air and Missile Defense Battle Command System (IBCS).

Furthermore, in the recent years, numerous developments have been carried out by key players that operate in the industry, which are anticipated to create remunerative opportunities for expansion of the market during the forecast period. For instance, in August 2020, Saab AB launched a decoy missile system, the Lightweight Air-launched Decoy Missile as part of Gripen’s E/F Electronic Warfare capability

Q1. What is the estimated industry size of rocket and missiles?

Q2. What is the leading application of rocket and missiles market?

A. Cruise Missiles is the leading application of Rocket and Missiles Market

Q3. Which is the largest regional market for rocket and missiles?

A. North America is the largest regional market for Rocket and Missiles market

Q4. What are the upcoming trends of rocket and missiles market in the world?

A. Development of high range rockets and missiles that can travel at high supersonic and hypersonic speeds

Q5. Which are the top companies to hold the market share in rocket and missiles?

A. Lockheed Martin Corporation, Raytheon Technologies, Northrop Grumman, BAE Systems, and The Boeing Company are the top companies that hold the highest market share in Rocket and Missiles market