by Level of Automation (Level 3, Level 4, and Level 5) and Component (Hardware, Software, and Services): Global Opportunity Analysis and Industry Forecast, 2020-2026

Autonomous vehicles also known as self-driving vehicles use artificial intelligence (AI) software, light detection & ranging (LiDAR), RADAR, and cameras to sense the surrounding environment and navigate by forming an active 3D map of that environment. There are different levels of autonomy ranging from semi-autonomous that require driver assistance to fully autonomous, which does not require a human operator. A lot of gas is burned while driving at high speeds or braking and re-accelerating excessively. Self-driving vehicles use less battery and consume less gas, which results in less pollution. This adds benefits to make it suitable for environment. 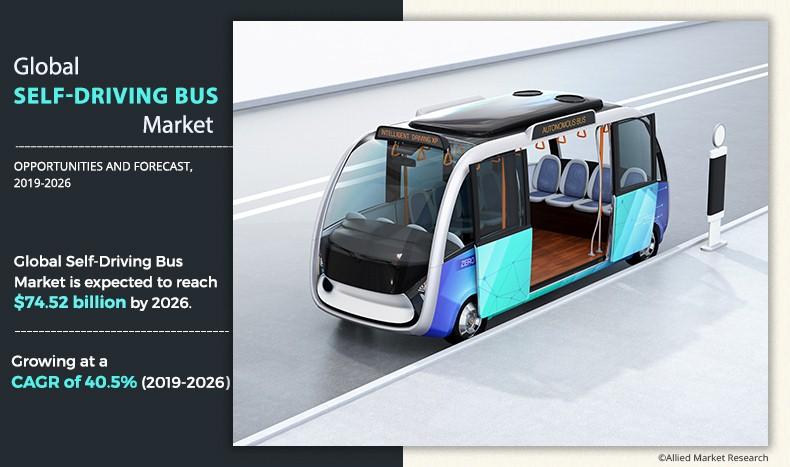 Factors such as reduction in traffic congestion due to improved safety and growth in connected infrastructure are anticipated to drive the self-driving bus market growth. However, high manufacturing cost and data management challenges are the factors that hinder the growth of the market. Further, development of smart cities is anticipated to provide remarkable growth opportunities for the players operating in the self-driving bus market.
The global self-driving bus market is segmented on the basis of level of automation, component, and region. On the basis of level of automation, it is divided into level 3, level 4, and level 5. By component, it is categorized into hardware, software, and services. Region wise, it is analyzed across North America, Europe, Asia-Pacific, and LAMEA.

Level 4 is projected as the most lucrative segments

Services is projected as the most lucrative segments

Reduction in traffic congestion due to improved safety

With the rapid adoption of Internet of Things (IoT), transportation infrastructure across the globe is evolving quickly. Companies such as Cisco and IBM have created digital platforms, which can automate street and traffic lights, optimize trash pickup, and augment surveillance. For instance, installation of IoT sensors in Las Vegas has managed to control traffic congestion and solve environmental issues. Connected infrastructure includes car parks, toll booths, smart street, and traffic lights, which in turn, boosts the growth of the autonomous vehicle market and eventually drive by wire market, as drive by wire system is necessary for autonomous driving technology. Thus, growth of connected infrastructure creates favorable conditions for adoption of autonomous vehicles, which, in turn, drives the growth of the self-driving bus industry.

Autonomous vehicles consist of more than 50 sensors including LiDAR, RADAR, and cameras, which are installed across these vehicles and help build a safety circumference. Any obstacle approaching the vehicle can be immediately detected by these sensors. However, these sensors are not economically priced. A high-quality long-range LiDAR can cost up to $75,000. Apart from the hardware cost, these vehicles also need software to extract information from the sensors to control them. Therefore, vehicle production and large-scale deployment of self-driving buses with pricey hardware pose as major challenges for the manufacturers. Thus, high manufacturing cost of self-driving bus is anticipated to hinder the growth of self-driving bus market trends.

Presently, smart cities are experiencing considerable growth across the globe. Emergence of disruptive technologies such as IoT and connected devices also lead to the development of smart transportation in smart cities. Advancements in IoT and cloud-based platforms has led to significant investments in smart cities. Several countries focus on transportation under smart cities initiative. For instance, the Chinese government is working on various programs for autonomous driving revolution. Around 300 Chinese cities, which include Xinjiang and Nanjing, have introduced smart-city projects, out of which 93 are focused on transportation. These cities could potentially use connected infrastructure to focus on building autonomous cars, self-driving buses, and shared-driving models. Furthermore, in September 2017, Baidu, a China-based technology company announced a $1.52 billion autonomous-driving initiative, which is called "Apollo Fund." This initiative is projected to invest in 100 autonomous driving projects till 2021. Thus, development of smart cities holds a remarkable growth opportunity for the key players operating in the market.

The self-driving bus market holds a high potential in the automotive industry. The current business scenario experiences rapid development in infrastructure and connectivity leading to the readiness to adopt this technology, particularly in the developed regions such as North America and Europe. Companies in this industry adopt various innovative techniques to provide customers with advanced and innovative features.

Factors such as reduction in traffic congestion due to improved safety and growth in connected infrastructure are anticipated to drive the growth of the global self-driving bus market. However, high manufacturing cost and data management challenges are the factors that hinder the market growth. Further, development of smart cities is anticipated to provide remarkable growth opportunities for the players operating in the self-driving bus market.

Among the analyzed regions, currently, North America is the highest revenue contributor and Europe is anticipated to exhibit remarkable growth rate during the forecast period, followed by North America, Asia-Pacific, and LAMEA.