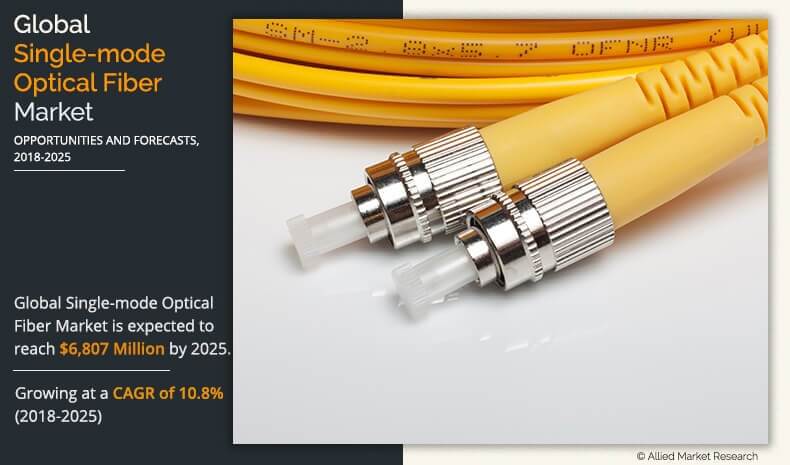 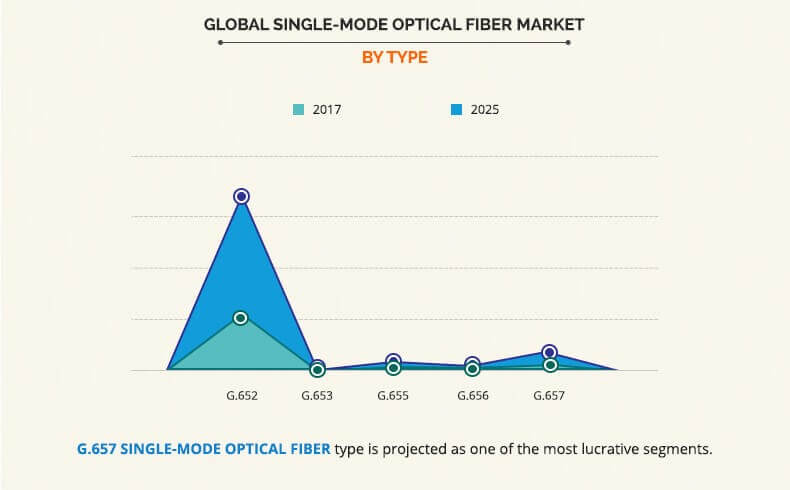 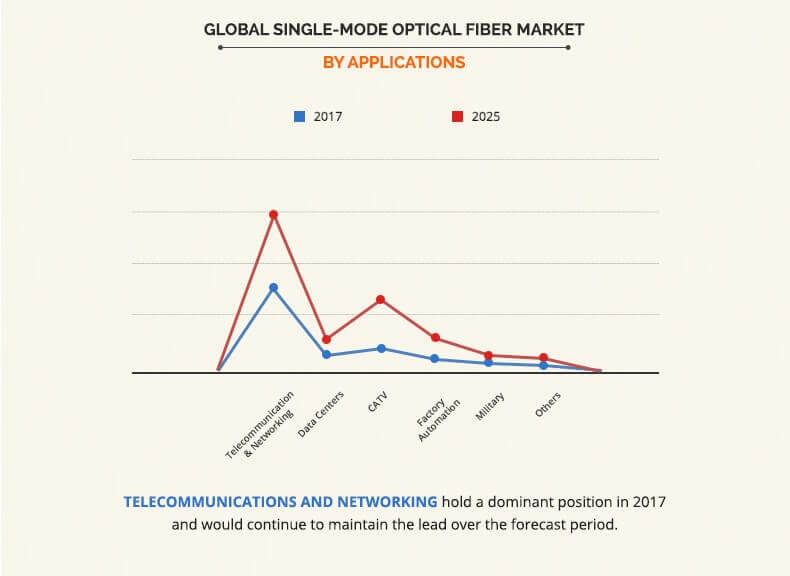 The telecommunication & networking segment dominated the overall market in 2017, and is expected to continue this trend during the forecast period, owing to increase in usage of single-mode (SM) optical fibers in optical communication systems (OCS) primarily to send voice, data, and video. Moreover, the telecom sector has shown immense growth in China and South Asian countries in the recent years, which is opportunistic for the market. 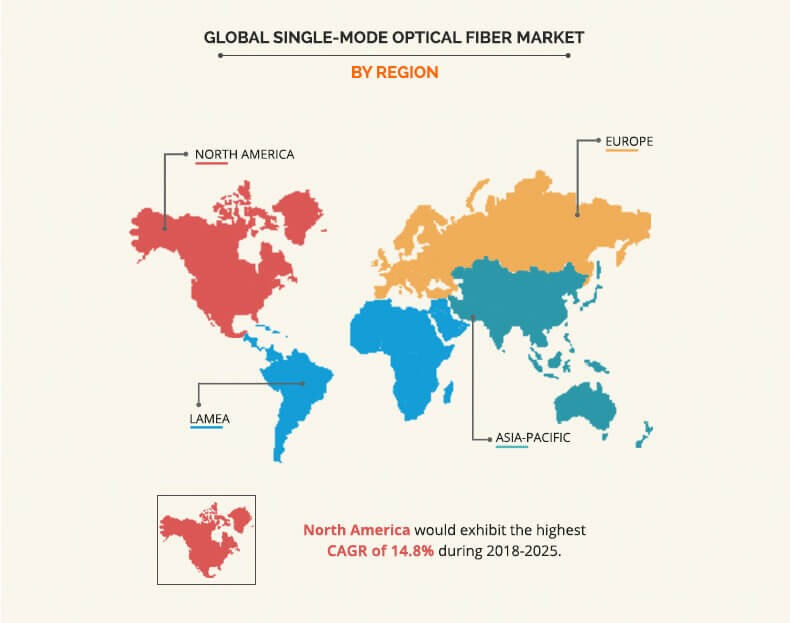 The Asia-Pacific region dominated the overall market in 2017, due to increase in penetration of single-mode optical fiber technologies in developing economies. This is attributed to significant upsurge in smart city projects. However, North America is expected to witness the highest growth rate during the forecast period.

The report focuses on the growth prospects and restraints of the market based on the analysis of the global single-mode optical fiber market trends. The study provides Porter’s five forces analysis of the industry to understand the impact of various factors such as bargaining power of suppliers, competitive intensity of competitors, threat of new entrants, threat of substitutes, and bargaining power of buyers on the growth of the market.

The global single-mode optical fiber market is segmented by type, application, and region. Based on type, the market is fragmented into G.652, G.653, G.654, G.655, G.656, and G.657. Depending on application, it is categorized into telecommunication & networking, data centers, CATV, factory automation & industrial networking, military, and others. Region wise, it is studied across North America, Europe, Asia-Pacific, and LAMEA.

Widespread implementation of 5G, increase in adoption of fiber-to-the-home (FTTH) connectivity, rise in demand for single-mode optical fiber, due to shortage of fiber and emergence of Internet of Things (IoT) act as the major drivers of the global single-mode optical fiber market. However, high installation cost and increase in adoption of wireless communication systems are expected to hamper the market growth during the forecast period. On the contrary, technological advancements in the fiber optic cable technology and rise in investments in optical fiber cable (OFC) network infrastructure are expected to provide lucrative opportunities for the market.

The demand for more data and better coverage across the world is on the rise among consumers. The fifth generation wireless connection is expected to be the next leap in technology, as it can transmit more data while providing a more steady and reliable connection. The characteristics of 5G, such as high data speeds and throughputs, are significantly influenced by these heavy-duty optical fiber networks that affect both the wireless side and wireline side of the infrastructure. Moreover, formidable network performance goals of 5G are heavily predicated on a massive availability of fiber connectivity. 5G is currently being tested in several markets, and is expected to witness widespread adoption in 2020.

Suppliers of single-mode optical fiber cables are increasingly finding it difficult to keep up with their endless demand in numerous industries. This leads to shortages and increases the price in some regions, including the U.S. As multimode optical fibers are encountering bandwidth-related problems on local area networks (LANs) and in data centers that operate at speeds of more than 10 Gbit/s, the single-mode fibers are in high demand. This is attributed to constant rise in traffic and rise in need for high internet speed, due to which the adoption of fiber-optic cables with increased bandwidth is expected to increase. Moreover, the demand for optical fiber cable in the global market exceeds supply, due to constant increase in demand from China.

The growth of 5G is expected to be fueled by the hike in consumer data and the explosion of Internet of Things (IoT) devices. According to the International Telecommunications Union (ITU), the market for IoT devices is estimated to generate over $1.7 trillion by 2019. In addition, owing to these developments, investments on fiber infrastructure are expected to surpass $144.2 billion during 2014–2019. Moreover, numerous countries have invested in optical fiber deployments, which is creating opportunities for market expansion. For instance, the U.S. needs significantly more fiber-optic infrastructure over the next five to seven years to support upcoming 5G wireless as well as broadband competition and rural broadband coverage that is expected to deploy fiber cable of around $130 billion to $150 billion. Thus, the emergence of 5G and explosion of Internet of Things (IoT) devices are expected to provide numerous opportunities for the market.

China is consuming a major part of the whole world single-mode optical fiber production capacity due to implementation of “Internet +,” “Broadband China,” and “Full Fiber-optic Network” strategies, followed by the U.S. and Japan. The single-mode optical fiber market is witnessing a healthy growth rate, due to the ongoing implementation of 5G network and upcoming FTTH network projects all over the globe. Moreover, consumers are demanding fast networking, making it mandatory to install more fiber-optic cables to improve the broadband connectivity. This increase in demand for the larger bandwidths for communication is expected to drive the growth of the global single-mode optical fiber market.

Furthermore, G.652.D fiber has been heavily researched for further performance improvement by optical fiber manufacturers, which is anticipated to provide lucrative opportunities for the market expansion. The improvement direction is majorly targeted toward overcoming optical signal attenuation, transmission non-linearity, and polarization mode dispersion (PMD). Along with this, surge in demand for internet applications such the Internet of Things (IoT), cloud computing, data storage, data transfer, video streaming, and over-the-top content fuel the market growth. The global single-mode optical fiber market is highly competitive, owing to strong presence of the existing vendors. Single-mode optical fiber vendors who have access to extensive technical and financial resources are anticipated to gain a competitive edge over their rivals, as they have the capacity to cater to the global market requirements. The competitive environment in this market is expected to further intensify with increase in technological innovations, product extensions, new product launches, and different growth strategies adopted by the key vendors.