The global situation awareness system market was valued at $27.74 billion in 2020, and is projected to reach $67.27 billion by 2030, registering a CAGR of 9.19%. Situation awareness system (SAS) are security systems that help in collecting, visualizing, and analyzing information related to the surrounding and remote environment to facilitate surveillance as well as security. It provides tools necessary to locate, communicate, alert, and provide messaging & file transfer functionality to users, using tactical terminal devices. SAS is the ability to identify, process, and understand critical elements of information and further analyze it with different systems such as surveillance awareness systems. SAS involves awareness of different environmental situations by collection and interpretation of information, which helps companies in taking informed decisions with timely actions. These systems are used across different areas such as traffic control and management that needs continuous monitoring of different events, which is important for timely action. SAS provides number of benefits to organizations including security, threat identification, risk analysis, and strategy planning to decide on the future course of action.

On the basis of component, the display segment dominated the overall situation awareness system industry in 2020, and is expected to continue this trend throughout the forecast period. This is attributed to numerous advantages provided by displays such as real-time surveillance, accurate situation awareness, unusual activity detection, and visual representation of the current situation, which drives growth of displays in the situation awareness system market. Furthermore, adoption of displays has increased among end users as it can process real-time videos and can connect with up to 20 cameras and 4 visual displays to present full 360° panoramic display to operators. Thus, providing lucrative opportunities for the market situation awareness system market growth. However, the global positioning system (GPS) segment is expected to grow the most, and this trend is expected to continue during the forecast period. The GPS technology is gaining popularity, owing to its wide military applications. In addition, GPS is used for obtaining positional information, text messages, and other data. 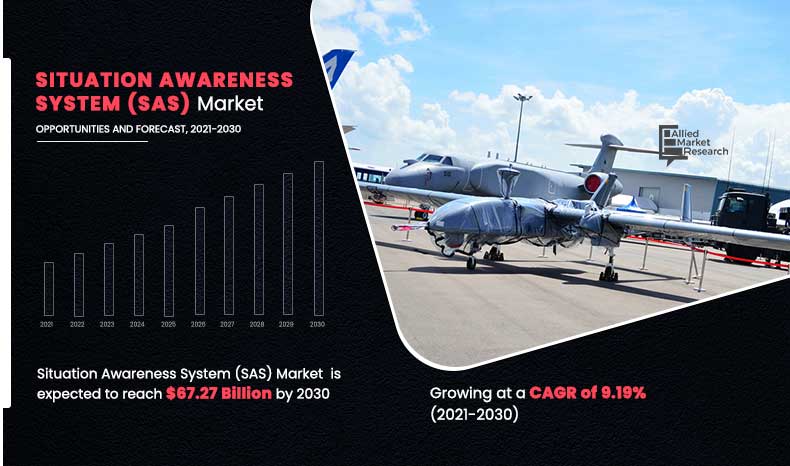 On the basis of type, the command & control system segment captured largest share in 2020, and is expected to continue this trend during the forecast period. The command & control systems segment plays a crucial role in coordination and safety mainly in military, defense, and aerospace industries. In addition, various governments across the globe are adopting this system for their defense sector as it provides exact information about a situation and improves decision-making capabilities in critical situations, which is expected to propel growth of this segment during the forecast period. However, the sonar segment is expected to witness highest growth in the upcoming years. This is attributed to the fact that technological advancements played an important role in increasing adoption of sonar to provide improved marine security for military and navy. In addition, features of sonar such as sound detection and accurate situation awareness in deep sea are some of the factors that contribute toward its growth in the situation awareness system market size.

Impact Of Covid-19 On The Situation Awareness System Market Trends

Sonar segment is projected as one of the most lucrative segments.

Rise in number of patients across various regions has led to a significant increase in adoption of situation awareness system and preplanned investments, owing to closing of work places & industries such as IT, automotive, and manufacturing. However, the COVID-19 pandemic has led to rise in adoption of advanced technologies to help consumers across every industry to combat against the pandemic. In addition, various governments across the region have implemented strict regulations on organizations to have a regular check on their employees and to evaluate business continuity plans in place to ensure smooth response to incidents such as disease outbreaks.

Displays segment is projected as one of the most significant segments.

Growth In Dependency On Sas For Cybersecurity

Growth in dependency on cyberspace is increasing the need for situation awareness system, mainly to understand IT environment and accurately predict as well as respond to potential problems that might occur in the future. Systems and networks that operate in cyberspace have vulnerabilities that can pose significant risks to both individual organizations and national security. By anticipating the risk in these systems, companies can develop effective countermeasures to protect their critical missions. Responding effectively has become more difficult as complications in technology have increased along with the growth in skill gap of individuals. Moreover, to respond and adapt to cyber-attacks, security teams need an integrated set of capabilities, which allows them to orchestrate their response according to pre-defined plans, driving the adoption of SAS. Further, many companies are harnessing data from many internal and external systems and are adopting situational awareness systems to help them prioritize cybersecurity to achieve better results, which is expected to impact positively on the market growth.

Asia-Pacific is projected as one of the most lucrative region.

In accordance with several interviews conducted of top level CXOs in the industry, ongoing advancements in next-generation defence technologies, along with significant rise in military budgets in countries of Asia-Pacific are expected to drive growth of the market. These systems find huge applications in terror controlling activities and multinational military operations across the world. In the military & defence sector, situational awareness system (SAS) enables real-time battlefield information sharing and provide a situational awareness, which enhances operational efficiencies of military activities. Growth in terrorist influence and incidents in the Middle East and rise in multinational military operations are expected to fuel growth of the market during the forecast period. In addition, surge in global awareness regarding technological benefits of SAS such as information exchange, situation assessment, and operational control is anticipated to escalate the demand. Further, the market is expected to witness lucrative opportunities in the upcoming years, owing to rapidly evolving defence technologies and rise in regional conflicts, which is expected to increase adoption of these systems in the defence sector.

In the current business scenario, integration of advanced technologies such as artificial intelligence into situational awareness systems is expected to fuel adoption of SAS among end users. Agents, analysts, and other professionals, globally, are using AI-powered technological solutions for situational awareness mainly to tackle challenges such as crime, fraud, terror, trafficking, and insider threat. These technologies help to search, aggregate, and fuse data points and human behavior indicators from multiple data sources and provide holistic view of reality by intelligently processing and analyzing them.

For instance, rise in accessibility of space has made tracking, detection, and categorization of large volume of objects in orbit more critical and adoption of artificial intelligence (AI) plays a vital role in enhancing capabilities of space situational awareness (SSA) and has become an integral part of the new space age. In addition, India is integrating artificial intelligence (AI) and data analytics in its solutions to enhance maritime awareness and mission planning. Indian assets would be well informed about all kinds of merchant ships, warships, submarines, and aircrafts around them, by using SAS systems.

Furthermore, emergence of the concept “Internet of Me” is anticipated to create numerous opportunities for situational awareness systems used for personal safety as well as for public safety. Further, shifting focus toward virtual technology to provide increased training efficiency to troops, who are preparing for operations provide additional opportunity for the market. For instance, army, navy, and air force are using 3D experience for combat simulation and have added it to their training arsenal as it offers a safe and effective way to train new recruits.

The global situation awareness system market is moderately concentrated and companies are focused on leveraging new technologies for offering intelligent SAS to cater to evolving end-user requirements. Key players have adopted various growth strategies to enhance and develop their product portfolio, garner maximum market share, and increase their market penetration. Rise in number of key players is expected to intensify the competition on a global level. Rise in competition among key players is expected to lower the cost and encourage development of technologically-advanced SAS during the forecast period.

Companies in this market are actively engaged in R&D activities, with a view to develop and introduce effective systems that can cater to the requirements of the defence industry.