Get detailed COVID-19 impact analysis on the Smart Weapons Market

The rapid spread of COVID-19 has had a significant impact on the global smart weapons market, owing to the implementation of strict lockdown measures across the world. COVID-19 pandemic led to several challenges for the smart weapons industry such as disruption in the supply chain of essential raw materials, logistics challenges, reduction in defense spending across various countries, and others. On the other hand, the defense systems manufacturers and service providers had to reduce expansion and R&D investments to withstand the decline in revenue and operating performance of the defense industry. The delay in purchase orders and slow production rate were some of the challenges observed in the smart weapons market throughout the year, and are expected to continue for a few years.

Smart weapons are computer-guided munitions equipped with the radio, infrared, laser, global positioning system and satellite guidance system, which give extraordinary accuracy and precision. Smart weapons are also termed as precision-guided weapons that are intended to hit the target precisely and reduce collateral damage and lethality. Smart weapons are operated and assisted by the use of external operating systems, located far away in the geographical area. Smart weapons system has changed the course of war engagement and its strategies. Cruise missiles use the information from the navigation satellite to maintain a proper course and direction during a flight. Smart guns have safeguards that allow them to operate only when activated by an authorized person, thus reducing misuse, gun theft, and self-harm scenarios. The safeguard features in smart weapons include RFID (Radiofrequency Identification Device) chips, fingerprint recognition, biometric sensors, mechanical locks, and magnetic kit. 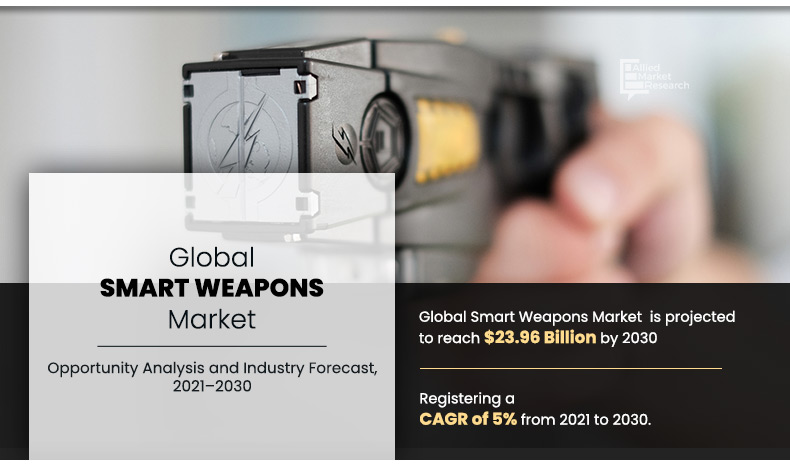 The global smart weapons market is driven by the growth in demand for precision strike weapons and unstable securities of countries. However, arms transfer regulations imposed on import and export of smart weapons pose a major restraint for the smart weapons market. On the contrary, a surge in the defense budget and increase in spending on up-gradation of weapons technology are factors that create new growth opportunities for prominent players. For instance, in September 2021, the U.S. Navy signed a contract with Northrop Grumman Corporation to proceed with low-rate initial production (LRIP) for the AGM-88G Advanced Anti-Radiation Guided Missile Extended Range (AARGM-ER).

Modern warfare techniques changed quickly over the past 10 years. Developed and developing countries focus on developing advanced missile systems with long-range and high impact. For instance, in December 2021, Defence Research and Development Organisation (DRDO) successfully test-fired the new generation nuclear-capable ballistic missile ‘Agni Prime’ from APJ Abdul Kalam Island, off the coast of Odisha in Balasore. Alsi, in October 2021, the U.S. successfully tested hypersonic missile technology, a new weapons system, which is already being deployed by China and Russia. Such developments in missiles fuel the demand for precision strike weapons.

Moreover, current conflicts globally have spotlighted the critical need for precision attacks and operational strikes. There is a crucial need to avoid any collateral damage with security and contribute to the efficient attack power potential that provides an immediate favorable effect on the warzone. These needs are met by smart weapons, which are quickly being taken into the defense forces inventories. Given the need for such weapons, the demand is expected to increase during and after the forecast period.

Increase in number of security threats from terrorist organizations

In the current years, terrorist incidents have increased drastically, since the power of terrorists has improved. For instance, in January 2021, a deadly twin suicide attack hit central Baghdad. In addition, according to the U.S. Department of Homeland Security and the National Consortium for the Study of Terrorism and Responses to Terrorism, a total of 8,302 terrorist attacks occurred globally, resulting in 25,082 deaths and 19,924 injuries in 2019. The increase in attacks leads to rise in smart weapons acquisitions and procurement by major economies, thus, increasing the demand for smart weapons, which further boosts its market growth.

Directed Energy Weapons is projected as the most lucrative segment

Moreover, security attacks are the key reasons that lead to increase in demand for smart weapons by the defense forces. In addition, innovation and evolution in the technological development of smart weapons provide the power to face the terrorists in a much more effective and efficient way.

With the existing regulations, the arms regulations imposed on import and export trade are not regulated effectively, as illegal arms accumulation still remains an issue. Arms control treaties, problems associated with regulating arms trade, stressing the complexity of the interests involved in the emergence of small arms as most promising weapons, and black and grey markets in terms of inefficient trade regulations are the main restraints that are expected to hamper the smart weapons market growth.

Laser is projected as the most lucrative segment

The major factor that hinders the smart weapons market includes, the Arms Trade Treaty that was put forward on 24 December 2014 by the U.N. office for Disarmament Affairs. This treaty aims to improve national small arms laws, import/export controls, and stockpile management – and to engage in cooperation and assistance. More than 100 nations have already signed the treaty. The major countries, such as, Argentina, Australia, France, Germany, Greece, Japan, New Zealand, Spain, and UK with other Middle East countries have accepted the Arms Trade Treaty, making the world smart weapons market more complex and tough to target.

The treaty seeks to forbid the use of definite weapons, which are considered extremely injurious or whose effects are deadly. A limited number of banned weapons and ammunition can be acquired and kept for training in, and expansion of, detection, authorization, and damaging techniques and counter-actions. Thus, the treaty is expected to control, forbid, and reduce the trade of smart weapons in the global market, which restraints the market growth.

Naval is projected as the most lucrative segment

Governments of countries such as Russia, the U.S., China, India, and others are increasing investment in arm forces to establish dominance on the battlefield. According to Stockholm International Peace Research Institute (SIPRI), total global military expenditure rose to $1981 billion in 2020, an increase of 2.6 percent from 2019. In addition, the rise in terrorist activities and civil activities in several regions and rise in international conflicts force countries to enhance their military strengths through advancement in weapons, which increase the demand for smart weapons.

Moreover, Governments of developed and developing countries such as India, China, Russia, the U.S., and others are significantly spending on military modernization programs to improve their firepower and upgrade their weapons & surveillance capabilities. For instance, in December 2021, the U.S. Air Force collaborated with BAE Systems Plc. to cross-deck BAE Systems’ advanced Compass Call electronic warfare system onto the U.S. Air Force’s next-generation electronic warfare aircraft. In March 2021, the Italian Navy ordered the new Teseo Evolved Weapon System, Teseo Mk2/E from MBDA. These activities are expected to create opportunities for the smart weapons market during the forecast period. Furthermore, increase in training programs of armed forces by major economies impact the rise in use of advanced weapons systems, which supplement the growth of the smart weapons market.

The global smart weapons market is expected to witness significant growth due to the competitive advantages of the smart weapons, such as accuracy, reliable first short and quick-hit capability, and overall reductions in the logistics carrying cost. In addition, rise in applications of smart weapons in the defense sector for war and security is expected to fuel the market growth in the coming years. For instance, in October 2021, the U.S. Air Force signed a $947 million contract with L3Harris Technologies, Inc. to modernize the U.S. Air Force B-52 self-defense, spectrum dominance systems. Moreover, the rise in demand for powerful striking power and efficient defense system and enhanced effectiveness of smart weapons are factors that drive the smart weapon market.

However, the high price of smart weapons and stringent government arms trade regulations are restraints associated with the smart weapons market. With the advancement in technology due to rise in demand, the cost of smart weapons is expected to reduce in the coming years.

Furthermore, numerous developments have been carried out by key players, such as General Dynamics Corporation, L3Harris Technologies Inc., MBDA, and others operating in the industry, are expected to create remunerative opportunities for the expansion of the market during the forecast period. For instance, in November 2021, Lockheed Martin Corporation entered into collaboration with Rafael Advanced Defense Systems Ltd., of Israel to jointly develop, market, manufacture, and support Rafael's Smart, Precise, Impact, and Cost-Effective (SPICE™) 250 weapon system for sale in the U.S. and in Poland.

Q1. How big is the smart weapons market?

Q2. Who is the largest manufacturer of smart weapons?

Q3. How can I get sample report/company profiles of smart weapons?

A. The report sample for global smart weapons market report can be obtained on demand from the website

Q4. What are the key segments covered in the report on smart weapons?

A. Smart Weapons Market has been segmented into product, technology, and platform

Q5. What are the types of smart weapons in defense industry?

A. Missiles, munitions, guided projectile, guided rocket, guided firearms, and directed energy weapons have been studied in the report

Q6. How can I get company profiles on top ten players of smart weapons industry?

A. The company profiles of the top players of the market can be obtained from the company profile section mentioned in the report. This section includes analysis of top ten player’s operating in the industry along with their last three-year revenue, segmental revenue, product offerings, key strategies adopted, and geographical revenue generated

Q7. What are the opportunities in smart weapons industry?

A. Increasing defense expenditure by governments of major economies

A. Incorporation of technologies such Artificial Intelligence and Machine Learning in weapons

Q9. What are the upcoming trends of smart weapons in the world?

A. Rise in procurement and development of smart weapons throughtout the world

Q10. What is the use of smart weapons in defense industry?

A. Smart Weapons are projectiles and bombs that are known for their accuracy and are guided by lasers and other means. Given the need of such devices in warfare, the demand is expected to increase during the forecast period