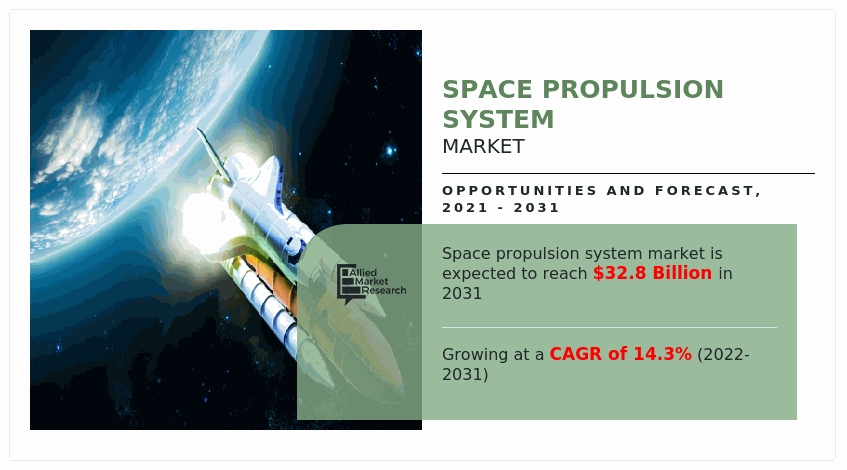 The space propulsion system market is segmented into Type, Class of Orbit and End User.

Non Chemical Propulsion is projected as the most lucrative segment

The global space propulsion system market is segmented into type, class of orbit, end user, and region. By type, the market is bifurcated into chemical propulsion and non-chemical propulsion. Depending on class of orbit, it is segregated into elliptical, geostationary earth orbit (GEO), low earth orbit (LEO), and medium earth orbit (MEO). On the basis of end user, it is fragmented into civil & earth observation, government & military, and commercial. Region wise, it is analyzed across North America, Europe, Asia-Pacific, and LAMEA.

The demand for internet connections via fixed and mobile broadband networks is increasing dramatically. Despite network expansions and enhancements, only around half of the world's households have access to fixed broadband services. With the development of LEO constellations, satellite broadband services are projected to increase broadband penetration. Owing to constellations of several hundred LEO spacecraft, a global broadband internet might be accessible from everywhere on the planet. In addition, local service providers will be able to expand their networks in terms of service range and geographic reach, allowing local services to be supplied over a global network. Such a rise in the demand for LEO-based spacecraft is expected to create demand for spacecraft propulsion systems.

Furthermore, satellites are primarily mass-produced to meet customer demand for high-speed internet connectivity almost anywhere, including aircraft, cruise ships, and remote spots throughout the world. SpaceX, OneWeb, and Boing are among the companies proposing and building LEO satellite networks to provide global high-speed internet connectivity. LEO satellites are widely used for communications, military reconnaissance, spying, and other imaging applications. For instance, in July 2021, Inmarsat announced to launch around 150 satellites into LEO to enhance its existing telecommunications capabilities. Increased bandwidth provided by Inmarsat's LEO satellites might be useful for congested sea routes or crowded aviation corridors. This growing number of LEO satellites creates demand for propulsion systems, which is anticipated to drive the growth of the global space propulsion system market.

Private companies are increasingly involved in space exploration, and the number of collaborations between government and private space agencies as well as agreements and outsources, including sourcing of different electrical parts & ancillary equipment, modern propulsion systems, robotic gadgets, and software development, have increased in the recent years. Amazon and SpaceX have revealed plans to colonize the moon and Mars, accordingly. For instance, in February 2022, CEO of SpaceX, Elon Musk announced SpaceX’s megarocket Starship that will one day take people and cargo to the moon, Mars, and other destinations in space. Such developments in space exploration for space tourism are expected to enhance spacecraft manufacturing capabilities and create demand for advanced space propulsion systems during the forecast period.

LEO is projected as the most lucrative segment

Moreover, space exploration has resulted in the research and construction of more dependable and efficient propulsion systems and spacecraft, lowering the possibility of system failure and increasing mission success rates. This factor pushed organizations and market players to develop new efficient propulsion systems for space missions. For instance, in February 2021, the Indian Space Research Organization (ISRO) announced that it is exploring the possibility of developing a new propulsion technology to fuel spacecraft for its future deep space missions. In addition, in January 2021, ISRO issued an invitation for “expression of interest” for design and modeling; simulation and analysis; testing and qualification of 100W Radioisotope Thermoelectric Generator (RTEG) without radio isotope, an alpha source thermoelectric propulsion technology. In addition, in April 2020, the University of Central Florida researcher developed an advanced new rocket-propulsion system known as a rotating detonation rocket engine, which will allow upper stage rockets for space missions to become lighter, travel farther, and burn more cleanly. Such developments in space propulsion systems are due to increase in space exploration missions, which is expected to drive the growth of the space propulsion system market during the forecast period.

Space debris, often known as space junk, is made up of wasted launch vehicles or spacecraft pieces that float around in space thousands of kilometers above the earth, posing a risk of colliding with satellites or a space station. In addition, debris can be created by an implosion in space or by countries testing missiles to destroy their existing satellites. Apart from Russia, China, the U.S., and India have all destroyed satellites, resulting in space debris. As space junk orbits the earth at such high speeds roughly 15,700 miles per hour (25,265 kph) in LEO, a collision with a satellite or spacecraft may inflict substantial damage. Moreover, in May 2021, more than 27,000 pieces of orbital debris were tracked by the Department of Defense’s global Space Surveillance Network (SSN) sensors, and as of August 2021, the European Space Agency (ESA) reports that approximately 29,210 pieces of debris are tracked on a regular basis by Space Surveillance Networks. Such a growing population of space debris poses a risk to all space vehicles, including spacecraft carrying humans, international space station, and satellites. These factors create concerns related to reducing space debris through decrease in the number of satellites and space vehicles, which are expected to negatively impact the space propulsion system market growth.

Commercial is projected as the most lucrative segment

Asia-Pacific is projected as the most lucrative region with a CAGR of 17% during the forecast period.

Moreover, the space propulsion system market is expected to witness significant growth due to the collaboration of the market players for the development of space systems. For instance, in March 2022, Northrop Grumman Corporation entered into a collaboration with Lockheed Martin Corporation to perform the final full-scale ground test of the abort motor for NASA’s Orion spacecraft Launch Abort System (LAS) at Northrop Grumman’s Promontory test facility. In addition, in April 2021, OHB System AG—a subsidiary of the European space and technology group, OHB SE—entered into collaboration with Thales Alenia Space for the European System Providing Refueling, Infrastructure, and Telecommunications (ESPRIT) module for the new Lunar Orbital Platform-Gateway. Under this collaboration, OHB SE developed a system for refueling the electrical propulsion system of the Lunar Gateway with xenon.

The CXOs further added that numerous developments have been carried out by key players, which are anticipated to create remunerative opportunities for expansion of the market during the forecast period. For instance, in July 2021, Sierra Nevada Corporation developed and completed testing of its hypergolic, or storable, liquid rocket propulsion system for orbit transfer, maneuvering, and guidance control.

Q1. What is the estimated industry size of space propulsion system?

Q2. What is the leading application of space propulsion system market?

A. Commercial is the leading application of Space Propulsion System Market.

Q3. Which is the largest regional market for space propulsion system?

A. North America is the largest regional market for Space Propulsion System market.

Q4. What are the upcoming trends of space propulsion system market in the world?

A. Rise in usage of non-chemical propulsion technologies; reduction in costs of space propulsion systems.

Q5. Which are the top companies to hold the market share in space propulsion system?