The space traffic management can be identified as methodologies, systems, and rules to perform operations in outer space with utmost safety, security, and sustainability. Since the inception of space era in 1958, approximately 6,000 launched have been made placing nearly 12,000 satellites in orbit. Among those 12,000 satellites, 4852 satellites are active as of 2022. The rest serve as space debris and continue to serve in orbit around earth. More than 20,000 satellites are accounted to be launched from 2021 to 2030, making space a highly congested area. Apart from the dead satellites, rise in number of small and micro-level particles serving as space debris is also threating space operations. More than 1 million space debris between 1cm and 10cm are identified orbiting around earth, and the count is constantly increasing. Increasing congestion in space due to rising number of operational satellites and launch forecast, threat of collision course, overlapping orbits, and debris collision has generated demand for effective space traffic management systems. 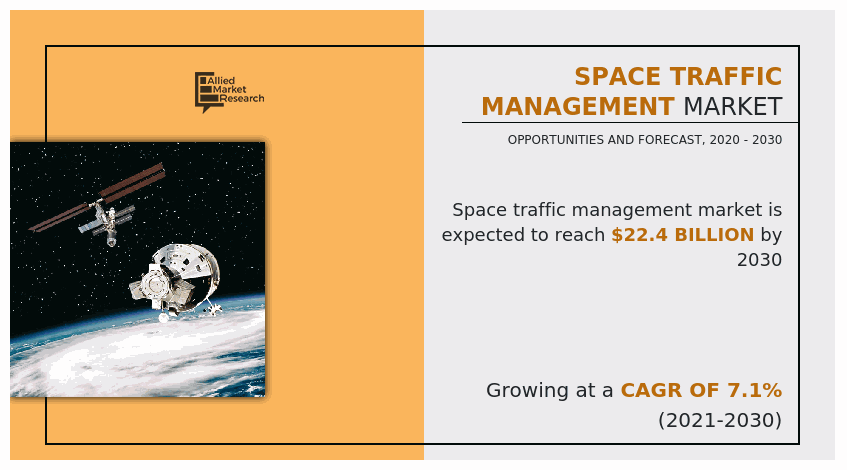 The COVID-19 pandemic has had an adverse effect on the overall space industry and thereby on the space traffic management industry as well. Limited trade of raw materials and finished goods along with imposition of lockdown and curfews across the globe resulted in shortage of material as well as raw materials, forcing companies to delay their launch schedule. Reallocation of budgets towards catering medical emergency from other domains such as space, defense, and aviation generated a liquidity crunch across the market. However, the COVID-19 pandemic created an opportunity for existing satellite operators. The demand for earth observation and satellite communication has increased significantly during the pandemic. The operators are using the data gathered from their satellites to study the impact of COVID-19 on the earth’s environment. For instance, NASA, Japan Aerospace Exploration Agency (JAXA), and the European Space Agency (ESA) are keeping track of how COVID-19 has changed the global economy and environment. Moreover, images collected from satellites were used for tracking the coronavirus spread and to control the pandemic.

Communication is projected as the most lucrative segments

Factors such as space-based connectivity for communication industry, satellite life vehicle extension programs, and internal co-operation between nations to agree on data sharing polices are some of the primary drivers supporting the business opportunities over coming years. Initiatives taken by several regulatory bodies such as European Commission, United Nations Office for Outer Space Affairs (UNOOSA), and other U.S. federal departments to increase transparency about space operations across nations considering outer space a limited resource will promote orientation of space traffic management system. The companies such as Lockheed Martin, L3Harris, and Airbus have started offering innovative solution to address the rising threat of space debris and cater the consumer demand for effective space operations. Reduced launch cost due to introduction of re-usable rockets, adoption of smallsats and cubesats, and increase in R&D activities such as geo mapping or establishing a temporary communication network on personal and educational level has generated the demand for end to end space operations service that provide supporting business opportunities.

The global space traffic management market is segmented into application, end use, orbit, activity, and region. By application, the market is categorized into communication, earth observation, navigation, global positioning system (GPS) & surveillance, technology development & education, and others. The other segment encompass several applications such as space science, maritime tracking, and other personal space-based operations. Depending on end use, the space traffic management market is fragmented into civil & government, commercial and military. The orbit segment will include low earth orbit (LEO), medium earth orbit (MEO) & elliptical orbit, and geostationary orbit (GEO). The activity segment is segregated into space situational awareness, space debris remediation, space orbit management, and launch vehicle operations. By region, the market is analyzed across North, Europe, Asia-Pacific, and LAMEA.

Commercial is projected as the most lucrative segments

The average operational life of a satellite in space is around 15 years. Several situations such as damaged components, exhaustion of onboard propellants, minor issues with the propellant system or computer system, and misalignment from the designated orbit can cause the satellite to stop its operations. Exhaustion onboard propellants is one of the primary reasons, satellites are considered to have a limited lifespan of 15 years. The number of satellites currently orbiting earth (dead and operational) is significantly high. Launching new satellites every 15 years adds up to the operational cost of companies and increases the number of dead satellites orbiting the earth, creating more space debris and reducing the chances of safe operations.

To meet these challenges, companies operating within the space traffic management market introduced satellite life extension vehicles, where instead of launching new satellites, an extension will be launched from earth, which will be integrated with existing satellite and replace nonfunctioning components. This practice will reduce space debris generated in space over time while adding 5 to 10 years to satellite operations. As of April 2022, Northrop Grumman leads the satellite life extension vehicle market space followed by several private players. In April 2021, Northrop Grumman along with a subsidiary of SpaceLogistics LLC successfully concluded the docking of Mission Extension Vehicle-2 (MEV-2) with Intelsat 10-02 (IS-10-02). This was the second successful docking mission of a life extension vehicle by the company with a commercial satellite.

LEO is projected as the most lucrative segments

Such initiatives notably increase the demand for placing communication satellites in low earth orbit. Thus, increase in launch of satellites and limited orbits in lower earth escalate the need for space traffic management, which is crucial in supporting business opportunities.

Increase in number of space debris and overlapping space orbits

Rise in space debris and the possibility of satellite collision or near miss due to overlapping orbits are among the key concerns of new space. Since the inception of the space age in 1958, there were approximately 630 explosions, breakups, collisions, or anomalous events generating several small fragments. Apart from 1million small fragments that are between 1cm and 10cm, there is 36,500 space debris that is greater than 10cm, whereas 130 million space debris that is between 1mm and 1cm. More than 90% of space debris is in lower earth orbit. The average speed of this debris is calculated to be 6 miles per second, capable of punching a hole in satellites if their orbits overlap. In May 2021, a tiny piece of space junk collided with the International Space Station (ISS), resulting in a 5mm hole in the Canadian-built robot arm.

To cater to the increasing concern of interception with space debris in LEO, satellite operators are expected to take protective and mitigation measures such as using more robust rad-hardened components or reconfiguring the orbit as and when needed. Such upgrades on components and maneuvers of satellites are expected to add 5–10% to the overall operational cost of satellites, thus restraining the space traffic management market growth.

Space debris remediation is projected as the most lucrative segments

Efforts are being taken by the major corporate bodies such as Lockheed Martin, Thales Group, L3Harris Technologies, Northrop Grumman, and Raytheon Technologies to reduce the overall design, development, manufacturing, and operational cost of space components have generated several business opportunities. Cost reduction can be achieved by incorporating the size, weight, power, and cost (SWAP-C) concept in their manufacturing process, whereas integrating technologies such as additive manufacturing mitigate the need for mass manufacturing. Apart from the reduced cost of space components, the companies such as SpaceX and Virgin Galactic with their concept of shared rocket space using re-usable rockets have made space accessible to a wider target audience.

The space traffic management market is segmented into Application, End Use, Orbit and Activity.

The space traffic management market is expected to undergo a major shift in the coming years. As the space industry becomes more and more crowded, the risk of collision, with other satellites or in-space debris will keep on increasing. This will boost the demand for space traffic management. Integration of powerful onboard computers, capable of identifying detecting, and tracing space objects in close proximity and re-adjusting orbit at an autonomous level is expected to augment a notable shift in business dynamics over the forecast period. The introduction of life extension vehicles by global industry leaders will also play a major role in defining the future business scope within the space traffic management market. These vehicles will dock with an existing satellite and replace damaged, expired components with new and operational components, adding 10-15 years of additional lifespan to the satellite. This initiative will reduce the overall operational cost of the satellite along with reducing space debris.

Design optimization through the adoption of the size, weight, price, and cost (SWaP-C) concept and reduction of manufacturing cost through the integration of additive manufacturing processes, along with long-term service agreements has reduced the overall cost of operation. Such initiatives by major industry players are expected to provide new business horizons to the Space Traffic Management market.

The North America and Europe market is anticipated to capture the highest market share, followed by Asia-Pacific and LAMEA. Asia-Pacific is expected to exhibit the highest growth rate during the forecast period, backed up by several driving factors such as the developing of indigenous space-based technologies, increasing satellite launch programs, government support towards foreign direct investment (FDI), and increasing interest in capital ventures towards space-based start-up, among others.

Among the analyzed regions, North America is the highest revenue contributor, followed by Europe, Asia-Pacific, and LAMEA. North America is expected to maintain its lead during the forecast period, owing to an increase in funding for conducting space-based research, the presence of major companies such as L3Harris, Lockheed Martin, and Northrop Grumman within the region, and the introduction of innovative products within the space traffic management system market, allowing them to gain technological competitiveness.

Q1. What are the upcoming trends of Space Traffic Management Market in the world?

A. Space situational awareness and space debris remediation are among the upcoming trends in space traffic management market.

Q2. What is the leading application of Space Traffic Management Market?

A. Communication is the leading application supporting the growth of space traffic management market.

Q3. Which is the largest regional market for Space Traffic Management?

A. North America will capture the highest market share within the forecast period.

Q4. What is the estimated industry size of Space Traffic Management?

Q5. Which are the top companies to hold the market share in Space Traffic Management?