Special mission aircraft are those aircraft, which are used to support and enhance the effectiveness of armed forces engaged in combat operations as well as non-combat commercial operations. The special mission aircraft can be configured to perform armed reconnaissance, precision strike, aerial refueling, airdrop resupply, personnel recovery, forward area refueling point operations, infiltration and exfiltration, humanitarian aid, and rescue missions.  Lockheed Martin provides the C-130J-SOF special mission aircraft to cater to the requirements of the international special operations forces (SOF). The aircraft has a payload capacity of 18,023kg, which allows for the carriage of electro-optical /infrared and radar systems, weapon systems, defensive aids, and refueling systems. In addition, many aircraft are designed for the purpose of integration of mission-specific systems for conducting search-and-rescue, maritime patrol, medical evacuation, VIP transportation, and other specific duties such as weather monitoring. 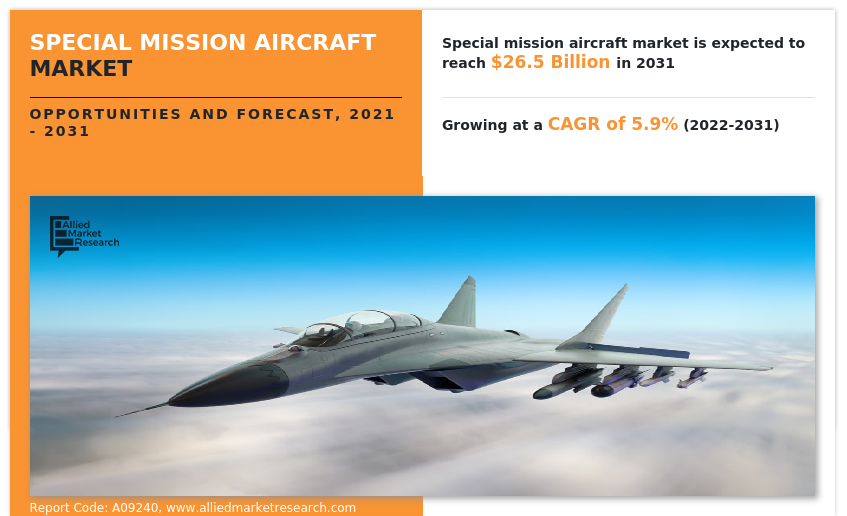 Factors such as increase in demand for drones, rise in demand for industry-specific solutions, and rise in spending to procure defense equipment globally are anticipated to boost the growth of the global special mission aircraft market during the forecast period. However, lack of skilled and trained personnel, and stringent regulatory norms for components are expected to hinder the growth of the global market during the forecast period. Moreover, rise in adoption of autonomous aircrafts, and increase in demand for air-to-air refueling are expected to create an opportunity for the special mission aircraft industry in near future.

The special mission aircraft market is segmented on the basis of application, platform, end-user and point of sale. The application segment is further divided as intelligence, surveillance, and reconnaissance (ISR), command & control, communication & navigation, and others. By platform, the market is classified into military aviation, commercial aviation, and unmanned aerial vehicle. On the basis of end-user, it is divided into defense, commercial & civil, and space. By point of sale, it is segmented into OEM, and aftermarket. By region, the market is analyzed across North America, Europe, Asia-Pacific, and LAMEA.

Intelligence, Surveillance, and Reconnaissance (ISR) segment is projected as the most lucrative segment

Increase in demand for drones

The use of special mission aircrafts such as unmanned drones has increased drastically over the years, especially to ensure border safety, counter-insurgency, and to conduct surveillance across commercial properties. Drones or unmanned aerial vehicles (UAVs) can identify security and terrorism-related challenges and locate vulnerable zones that are prone to several risks. Drones are the modern force multiplier that can improve the abilities of security forces to monitor criminal activities and tackle evolving challenges in defense and homeland security. In addition, the commercialization of drones is being witnessed throughout the world, as they are often used by oil & gas companies, survey agencies, land & water resources protection agencies, and news agencies, which notably contributes toward the growth of the global market.

In addition, increase in adoption of advanced drones to carry out aerial surveillance at restricted areas and public gatherings such as political rallies, sporting events, smuggling, terror missions, and other illegal activities boosts the market growth. In the last couple of years, the world has witnessed an increasing number of drones-related incidents globally. For instance, countries such as the UK, Saudi Arabia, France, the U.S., India, Spain, and Germany have witnessed aerial surveillance done by unverified drones, attacks on oil reserves, and arms & ammunitions dropping. Such incidents have experienced an exponential growth over the last five years, which notably augment the market growth for special mission aircrafts.

Military Aviation segment is projected as the most lucrative segment

Rise in demand for industry-specific solutions

The global rise in economic intensification has led to an increase in demand for cost-cutting and the development of high-efficiency solutions across the global industries. This rise in demand boosts the need for affordable, easy-to-implement, and high-value on-demand customized systems for the distinct requirement of various industries. The special mission aircrafts manufacturers have increased the development of customized aircrafts and drones for warehouse management, capturing, viewing, and analyzing aerial imagery for agriculture, mining, utility, power, media, telecommunication, logistics, oil & gas, and construction industries, and others. For instance, in April 2021, Skyports and Kenya Airways have signed a Memorandum of Understanding (MoU) for launching operations of permanent unmanned aerial vehicles (UAV) in Kenya. The partnership is aimed at exploring the commercial impact and viability of a variety of logistical, inspection, and medical drone use cases. The special mission aircrafts offer customizable working capacity which increases their integration in different operations of multiple industries. The ability of these aircrafts to perform in multiple environments and deliver customized output acts as a key driver for the growth of the special mission aircraft market in the forecast period.

Defence segment is projected as the most lucrative segment

Lack of skilled and trained personnel

Lack of skilled pilots, who can fly modern special mission aircrafts that fly with high speeds and gather accurate data majorly restrains the market. This factor not only prevails in the defense sector, but is also prevalent in the commercial sector.  As with any flourishing market, it is usually difficult finding the trained workers to fill special mission aircrafts related jobs. In special mission aircrafts market space, the innovation is rapidly outpacing training, and the lack of qualified personnel can limit growth opportunities for providers as well as suppliers. Some special mission aircrafts applications necessitate piloting skills and/or others require geo-spatial experts to process data in order to obtain accurate information from images. Moreover, regulations tend to change rapidly to meet the requirements of present and future commercial uses. All these factors are expected to limit the growth of the market during the forecast period.

Rise in adoption of autonomous aircrafts

Cargo planes & drones are expected to be the first to adopt this autonomous aircraft technology. As cargo drones are capable of transporting heavy payloads, they are entering flight test and some experts expect them to start operational service before air taxis carry passengers in urban areas. In addition, the growth in the e-commerce industry is driving the air cargo demand, which may increase the demand for air cargo pilots in the near future. Hence, most of the developments in the autonomous aircraft market are aimed at bringing the autonomous cargo aircraft into commercial use, to fill in the gap due to pilot shortage. Boeing’s futuristic NeXt division oversees its heavy-duty drone prototype that is capable of lifting a 500-pound payload. The cargo air vehicle conducted its first indoor flight test last year, and it may move to outdoor testing in 2019. Furthermore, countries such as the U.S., Singapore, the UAE, China, and other developed nations, are using autonomous aircraft to deliver healthcare services such as medicines and other emergency products. Thus, companies are looking forward to design such autonomous aircrafts for multipurpose applications. Hence, such several developments and innovations in the industry leads to the adoption of autonomous aircrafts, which thereby propels the special mission aircraft market growth.

Asia-Pacific would exhibit the highest CAGR of 6.6% during forecast period.

The COVID-19 outbreak forced governments across the globe to implement stringent lockdown and ban import–export of essential raw material items for most of 2020, and few months in 2021. This led to sudden decline in availability of important raw materials for aircraft components. As a result of interrupted supply chains and production schedules caused by the COVID-19 pandemic, aviation production and sales suffered severely, which, in turn, negatively impacted the market for special mission aircraft market. Moreover, overall decline in the output generation in the end use industry such as military & defense, civil & commercial, logistics & transportation, construction & mining, among others has resulted to lower demand outlook. The reduction in aerospace and defense spending has had a negative impact on special mission aircraft development and deployment plans, particularly unmanned aerial vehicles (UAVs). Markets throughout the world, observed reduced procurement of special mission aircrafts last couple of year, and the procurement contracts are expected to grow slowly over the next few years, as governments continue to build up their defense capabilities for addressing the uncertain geopolitical tensions across different nations such as the India-China, India-Pakistan or the continued disagreement in the South China Sea, among others.

The special mission aircraft market is expected to witness significant growth, due to due to surge in demand for drones for commercial applications. Moreover, armed force modernization is one of the significant programs for armed forces around the world. Under such modernization program aircraft are being procured for specific operations like airlifters for carrying out a diverse set of missions, ranging from electronic and signals intelligence gathering, long-range anti-submarine warfare and psychological operations. This is done with primary objective to lessening the risk and achieving success through initial attempts. This is the driving the growth of r Special Mission Aircraft Market.

To fulfil the changing demand scenarios, market participants are concentrating on contact to increase their customer base. For instance, in July 2022, Israel Aerospace Industries Ltd. (IAI) signed a contract valued at over $200 million to provide Special Mission Aircraft to a country in Europe, which is a NATO member country. The Special Mission Aircraft will be developed by IAI’s Group and subsidiary ELTA Systems Ltd. Moreover, in June 2022, BAE Systems signed a contract worth more than $497.5 million (£500m) for the delivery of 20 new Eurofighter Typhoon aircraft for the Spanish Air Force.

In addition, market participants are continuously focusing on product development efforts to match changing end-user requirements and meet new business opportunities. For instance, in May 2019, Textron Inc. developed the banana-yellow Cessna Citation Latitude to focus on promoting the special missions’ capabilities of its jets and turboprops.

Q1. What is the estimated industry size of special mission aircraft?

Q2. Which are the top companies to hold the market share in special mission aircraft?

Q3. What is the leading application of special mission aircraft market?

A. Intelligence, Surveillance, and Reconnaissance (ISR) is the leading application of special mission aircraft market.

Q4. Which is the largest regional market for special mission aircraft?

A. Asia-Pacific is the largest regional market for special mission aircraft.

Q5. What are the upcoming trends of special mission aircraft market in the world?

A. Rise in adoption of autonomous aircraft, and increase in demand for air-to-air refueling are the upcoming trends of special mission aircraft market.