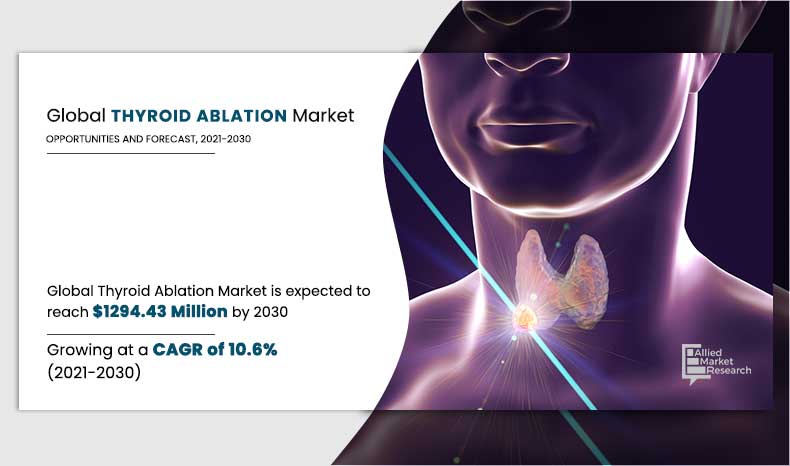 Radiofrequency Ablation segment holds a dominant position in 2020 and would continue to maintain the lead over the forecast period.

The ablation technique is used to treat the tumors and nodules minimally invasively to reduce the size of thyroid nodules and restore thyroid function. Radiofrequency Ablation (RFA) is a minimally-invasive technique performed by an endocrine surgeon guided by ultrasound imaging. The physician delivers targeted radio waves that disrupts the nodule’s cells, causing them to shrink as the body absorbs the ablated tissue. RFA also enables patients to resume normal daily activity with minimal recovery time. While surgery may involve removing part of the thyroid, RFA maintains thyroid integrity, which supports improved thyroid function.

Most recently, microwave ablation (MWA) has been proposed to treat thyroid nodules, from the experience of its use in other organs like liver, kidney and lung in particular. MWA advantages respect to RFA includes reduction in treatment time, larger ablation zone, less heat sink effect.

However, the high cost the thyroid ablation products and the maintenance cost is expected to hinder the market growth during the forecast period.

The global thyroid ablation devices market is segmented on the basis of type, application, end user, and region. By type, the market is categorized into image-guided ablation, radiofrequency ablation microwave ablation, and others.

On the basis of application, it is divided into thyroid cancer, and thyroid nodules.

On the basis of distribution channel, it is divided into hospitals and clinics, ambulatory surgical centers, cancer specialty centers, and others.

Depending on type, the radiofrequency ablation segment dominated the market in 2020, and this trend is expected to continue during the forecast period, owing to increase in advancement in new technologies are the key factors for the growth of the segment. Rise in availability of   the ablation devices such as RF 3000 Radiofrequency Ablation System, Star radiofrequency electrode fixed for the treatment of thyroid cancer. However, the microwave ablation segment is expected to witness considerable growth during the forecast period, owing to increase in demand of microwave ablation for thyroid tumors and nodules.

Radiofrequency Ablation segment holds a dominant position in 2020 and would continue to maintain the lead over the forecast period.

On the basis of end user, the hospitals and clinics segment dominated the market in 2020, and this trend is expected to continue during the forecast period, owing advanced medical equipment along with specialized medical and technical staff. In addition, bigger hospitals & clinic, offer more specialized treatments and services for patient to admit for overnight stays. Further, many patients prefer to get treatment in a hospital for better results of the surgery.

Thyroid Cancer segment is projected as one of the most lucrative segment.

North America garnered a major share in the thyroid ablation devices market in 2020, and is expected to continue to dominate during the forecast period, owing to rise in prevalence of thyroid cancer, presence of key players, development of the healthcare sector, and presence of new innovative technologies in the region. However, Asia-Pacific is expected to register the highest CAGR of 11.0% from 2021 to 2030, owing to increase in prevalence of thyroid nodules and thyroid cancer, and rising demand of ablation procedure.

Asia-Pacific is expected to experience growth at the highest rate, registering a CAGR of 11.1% during the forecast period.

The market gains interest of healthcare companies, owing to focus on preventive facilities provided to patients who are undergoing critical thoracic surgeries, which are more complex than other health conditions.

This leads to increase in utilization for ablation devices; thus is a great opportunity that further propels growth of the market.

North America is expected to witness highest growth, in terms of revenue, owing to rise in geriatric population, presence of key players, and advancements in healthcare investments. Asia-Pacific was the second largest contributor to the market in 2020, and is expected to register fastest CAGR during the forecast period, owing to increase in incidences of thyroid cancer and unmet needs for advanced ablation devices.

However, high cost associated with installation and maintenance of ablation devices restrain the market growth during the forecast period

Q1. What is the total market value of Thyroid Ablation market report ?

Q2. What would be forecast period in the market report?

Q3. What is the market value of Thyroid Ablationmarket in 2021?

Q4. Which is base year calculated in the Thyroid Ablation market report?

A. The base year is 2020 in Thyroid Ablation market

Q5. Which are the top companies hold the market share in Thyroid Ablation market?

Q6. Which is the most influencing segment growing in the Thyroid Ablation report?

A. Radiofrequency Ablation segment dominated the global market in 2020, and expected to continue this trend throughout the forecast period due to the technological advancements and new product launch and thus is expected to drive the segment

Q7. What are the key trends in the Thyroid Ablation market report?

A. Increase in demand for new technologies in thyroid ablation such as advanced infrastructure for research & development and investments in healthcare is anticipated to drive the market in the forecast period.

Q8. What are the market values / growth % of emerging countries?

A. North America is projected to account for a major share of the global thyroid ablation market during the forecast period. U.S. dominated the North America rise in investments for new Thyroid Ablation system launch in the R & D sector due to presence of key players across the country.

Q9. What is Thyroid Ablation ?

A. Thyroid Ablation is a procedure done to restore the function of thyroid gland while suffering from thyroid cancer and thyroid nodule.

Q10. What are Thyroid Ablation Systems are used for?

A. Thyroid Ablation systems used for the treatment of disorders such as thyroid nodules and thyroid cancer.