Airport traffic and income have been significantly and immediately impacted by COVID-19. Global passenger travel decreased as a result of the COVID-19 pandemic. The problem first appeared in Asia-Pacific, however according to ACI, the rapid spread of the virus and the containment measures put in place as a result, such as government advice to stay home and airport closures, led to a 22.9% decline in global air traffic in February and a 53.1% decline in March 2020. This amounted to a drop in passenger volume of 620 million in the first quarter of 2020. Owing to a 90% global reduction in passenger travel, April was an especially challenging month. Global shutdown of tourism industry also had a major impact on ultralight aircraft market. Majorly, ultralight aircrafts are used for tourism and recreational purpose, suffering from major consumer loss. However, quick revival of tourism industry and usage of ultralight aircraft in various industry has allowed the market to recover at a notable pace. 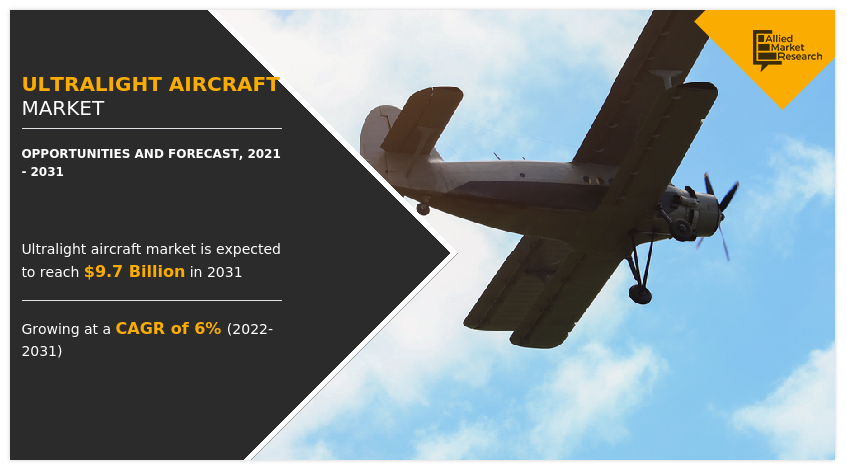 The ultralight aircraft market is segmented into Technology, Propulsion, Takeoff and End Use.

Ultralight aircraft have developed into specially designed aircraft of very low weight and power but with flying characteristics similar to conventional light aircraft. Originally, ultralights were simply hang gliders modified for power by installation of small engines similar to those used in chain saws. Although upgraded variants are currently utilized for training, police patrol, and other activities, including a planned use in conflict, they are still primarily designed for recreational flight. Ultralights can be powered or unpowered. They should weigh no more than 155 pounds when unpowered. If powered, they have an empty weight of no more than 254 pounds, a fuel capacity of no more than 5 US gallons, a top speed in level flight of no more than 55 knots, and a power-off stall speed of no more than 24 knots.

Unmanned is projected as the most lucrative segment

Growth of the ultralight aircraft market is driven by factors such as low cost of acquisition and maintenance, and absence of regulatory norms limiting civilians to fly an ultralight aircraft in certain regions. Placement of ultralight aircraft in recreational and sports activities are backed by increasing expenditure trends by civilians across the globe to support business opportunities within the region. Rise in disposable income across the globe and increasing delays in delivery of conventional aircraft is expected to impact ultralight aircraft in a positive manner to a certain extent. Rise in sports, tourism, and recreational activities post COVID-19 is supporting business opportunities within the segment. In Q1 2022, there were an expected 117 million foreign visitors, up from 41 million in Q1 2021, an increase of 182% year over year. About 47 million of the additional 76 million overseas arrivals were counted in March 2022.

Electric and hybrid is projected as the most lucrative segment

The ultralight aircraft market is segmented on the basis of technology, propulsion, takeoff, end use, and region. By technology, it is categorized into manned and unmanned. The propulsion segment is further sub divided into conventional propulsion and electric & hybrid propulsion. Depending on takeoff, the market is fragmented into commercial takeoff and landing (CTOL) and vertical takeoff and landing (VTOL). The end use segment is bifurcated into civil and commercial & military. Region wise, the market is analyzed across North America, Europe, Asia-Pacific, and LAMEA.

VTOL is projected as the most lucrative segment

The sudden outbreak of COVID-19 in 2019, imposition of global trade and travel restriction in 2020 and 2021, followed by the Ukraine-Russia war in 2022 has posed a notable amount of challenges in business operations, majorly in cross border trade. Governments across the globe have limited their trade dependencies on European regions and are aligning their inclination toward Asia-Pacific, Africa, and the Middle East. The inter-European trade infrastructure is also undergoing a major shift, casing notable business losses.

Ultralight Aircraft Market By End Use

Civil and commercial is projected as the most lucrative segment

Rise in business travel, tourism activities, and other commercial applications of ultralight aircraft

Rise in concerns related to operational safety and regulatory landscape

The COVID-19 pandemic had a significant impact on the business even though the demand for ultralight aircraft was steadily increasing. Even the largest ultralight aircraft manufacturers ran into operating problems, owing to supply chain disruptions and restricted site access. Numerous governments imposed a countrywide lockdown, forcing businesses to shut down their factories. Defense firms were immediately impacted by extended state of lockdown in some nations, which forced them to put off ordering aircraft and their suppliers. In addition, demand for ultralight aircraft was affected by sudden fall of tourism and recreational activities. Increase in cost of storing aircraft has put a significant financial strain on market participants.

Among the analyzed regions, Asia-Pacific is the highest revenue contributor, followed by North America, Europe, and LAMEA. Asia-Pacific is expected to witness highest growth rate during the forecast period, owing to increasing efforts of the Indian and Chinese governments to develop indigenous aircraft infrastructure.

Q1. What are the upcoming trends of ultralight aircraft market in the world?

A. The rise in tourism and recreational activities across the globe are major factors driving the market of ultralight aircraft.

Q2. What is the leading application of ultralight aircraft market?

A. Business travel, recreational activities, surveillance, and reconnaissance and some of the major applications of an ultralight aircraft.

Q3. Which is the largest regional market for ultralight aircraft?

A. Asia-Pacific region will capture the highest market share within the ultralight aircraft market.

Q4. What is the estimated industry size of ultralight aircraft?

Q5. Which are the top companies to hold the market share in ultralight aircraft?