The COVID-19 crisis has created uncertainty in the undersea warfare systems industry, massive slowing of supply chain, falling business confidence, and increasing panic among the customer segments. Governments of different regions have already announced total lockdown and temporary shutdown of industries, thereby adversely affecting the overall production and sales. The impact of the COVID-19 pandemic has resulted in delayed development of undersea warfare systems and slowdown of trials & demonstration and restrictions in operation of key players. Governments across the world prioritized the healthcare industry to combat the widespread COVID-19 virus, which adversely affected performance of the defense industry. However, global defense spending reached $1.83 trillion in 2020, a 3.9% annual increase. As a proportion of GDP, global spending sharply increased from an average of 1.85% in 2019 to 2.08% in 2020 as military budgets were maintained despite severe economic crisis caused by COVID-19 pandemic and series of lockdowns introduced around the world in response. The pandemic lockdowns were lifted and then re-instated to curb ascendance of the COVID-19 infections as public utilities were gradually opened in major countries such as the UK, India, and Italy. Shortage of components, subsystems, and electronic systems, owing to regulations associated with import and export of goods have resulted in delayed manufacturing. Development of undersea warfare systems was further impacted by material shortage, owing to manufacturing shutdowns in China, South Korea, and Taiwan. However, post pandemic, the development of undersea warfare systems has been observed. With the relaxation of lockdown measures, vaccination drives, and the consequent opening of markets across the world, the demand for undersea warfare systems is anticipated to grow considerably in the near future. 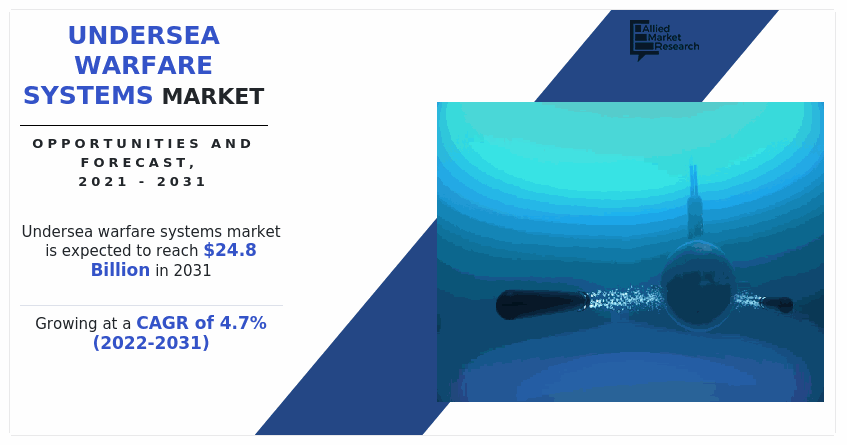 The global undersea warfare systems industry is segmented into type, mode of operation, application, and region. By type, the market is classified into weapon systems, communication & surveillance systems, sensors & computation systems, countermeasure systems & payload, and unmanned underwater vehicles. According to mode of operation, it is fragmented into manned operations, autonomous operations, and remote operations. On the basis of application, it is categorized into combat, C4ISR, and others (training & transport and special missions). Region wise, it is analyzed across North America, Europe, Asia-Pacific, and LAMEA.

Communication and surveillance systems is projected as the most lucrative segment

Submarines are valuable operational assets, which make a substantial contribution to three key aspects of marine operational warfare, including sea denial, maritime power projection, and sea control. Submarines have vital operational features such as stealth, flexibility, lethality, and endurance. They substantially enhance the mission advantage and sea strength, and is almost undetectable while fully submerged.

As countries construct regional/global maritime surveillance systems, the operational stealth of submarines is becoming increasingly important. For instance, under Project 75, the Indian Navy commissioned its 4th stealth Scorpene-class submarine in November 2021. The Project involves six submarines of Scorpene design. Among these, the three submarines, including Khanderi, Kalvari, and Karanj have already been commissioned in the Navy. Furthermore, the Russian Navy received three nuclear-powered, stealth submarines in the last quarter of 2021to boost the country’s seaborne deterrence forces. Hence, rise in demand for modern stealth submarines is anticipated to fuel the growth of the unmanned warfare systems market during the forecast period.

C4ISR is projected as the most lucrative segment

Various nations across the world are finding ways to gain supremacy in naval operations to enhance their defense capabilities. As water covers more than 3/4th of the Earth’s surface, strengthening the naval forces is imperative to effectively defend the national borders. In April 2022, Officials of the U.S. Naval Undersea Warfare Center (NUWC) Division awarded contracts worth $49 million to 13 companies (including key players such as Booz Allen Hamilton Inc., L3Harris Technologies, and nine other players) for the Sensors and Sonar C15 Rapid Prototyping Development project. These 13 companies are to develop research models for applications on surface warships, submarines, surveillance, autonomous vehicles, submerged cables, distributed networks, irregular warfare, and aircraft. Furthermore, in May 2022, the Australian Defense Minister Peter Dutton announced a $1.44 billion investment in developing leading-edge unmanned submarine technology to strengthen Australia’s undersea warfare capabilities amidst growing regional tensions. Such developments are expected to propel the growth of the global undersea warfare systems market.

Unmanned aerial vehicles, commonly known as drones, are being developed and deployed as unmanned underwater vessels (UUVs) or underwater drones to gain a strategic edge in oceans. The countries such as the U.S., China, Russia, and the UK are all developing and deploying the vessels. UK, which is escalating its military existence in the Pacific region, is expected to deploy its first extra-large underwater drone to supplement its Astute-class submarines already present in the region. Furthermore, the Navy of the UK is developing Manta—an underwater drone—which is an unmanned version of the existing S201 manned submersible developed by a British manufacturer MSubs.

The undersea warfare systems market is segmented into By Type, Mode of Operation and Application.

The undersea warfare systems market is anticipated exhibit growth potential in the coming years, owing to numerous developments carried out by top players. In addition, companies operating in the industry have received funding and contracts from government and defense organizations, which has strengthened the growth of the market across the globe.

There has been increasing focus on reducing costs associated with undersea warfare systems to offer communication, surveillance, and countermeasure systems. The leading players in the market are developing customized solutions and applications to cater to the customers’ growing needs, in addition to exploring novel technologies and applications through scientific research and technology demonstration.

Various programs and partnerships have been developed by defense forces to support the development of undersea warfare systems. For instance, in September 2021, Australia, the UK, and the U.S. collaboratively established AUKUS partnership to pursue the acquisition of nuclear-powered submarines (SSNs). Through the AUKUS Undersea Robotics Autonomous Systems (AURAS) project, these nations are further collaborating on development of autonomous underwater vehicles, which will be a significant enhancement for naval forces. Initial trials and experimentation of this capability are planned for 2023.

Q1. What are the upcoming trends of undersea warfare systems market in the world?

A. The upcoming trends of undersea warfare systems market include development of autonomous systems, and greater adoption of unmanned underwater vehicles.

Q2. What is the leading application of undersea warfare systems market?

A. The leading application of undersea warfare systems market is C4ISR.

Q3. Which is the largest regional market for undersea warfare systems?

A. North America is the largest regional market for undersea warfare systems.

Q4. What is the estimated industry size of undersea warfare systems?

Q5. Which are the top companies to hold the market share in undersea warfare systems market?