Bile is a substance that aids in digestion of fats. It is produced by the liver and stored in the gallbladder. Bile is secreted through the bile ducts. This substance is released into the small intestine after eating a fat-containing meal. There are numerous different conditions that are responsible for causing strictures of the bile duct. Some of them include pancreatic cancer, cancers of the liver, bile duct, large intestine, & gallbladder, pancreatitis, gallstones, radiation therapy, and others. 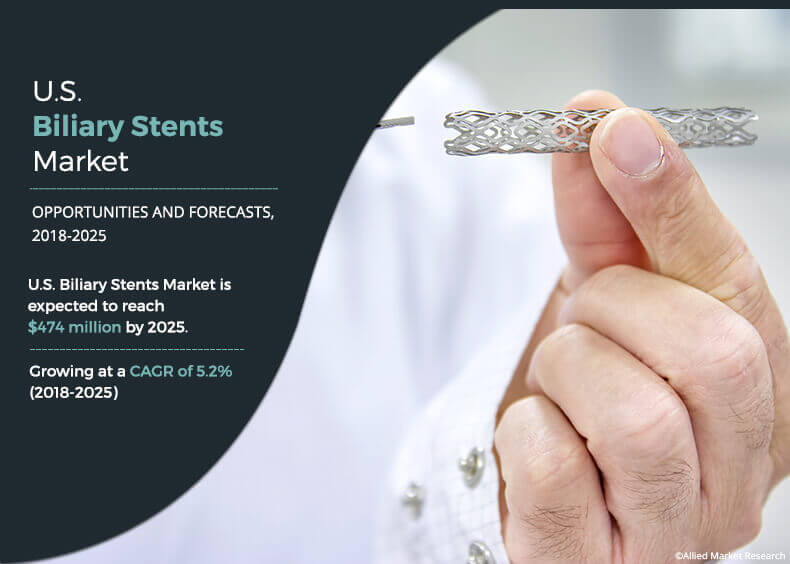 The U.S. biliary stents market growth is anticipated to rise gradually throughout the forecast period. This is attributed to the fact that the prevalence of biliary disease is rising in the U.S. Biliary diseases include various conditions such as benign biliary strictures gallbladder disease, biliary tract disease, acalculous cholecystitis, choledocholithiasis, cholangiocarcinoma, and others. There is a considerable increase in the prevalence of this disease. Estimates from the National Pancreas Foundation (2019) suggest that the prevalence of chronic pancreatitis is 50 in 100,000 people. Furthermore, surge in awareness with respect to different biliary diseases also promotes the growth of the market. 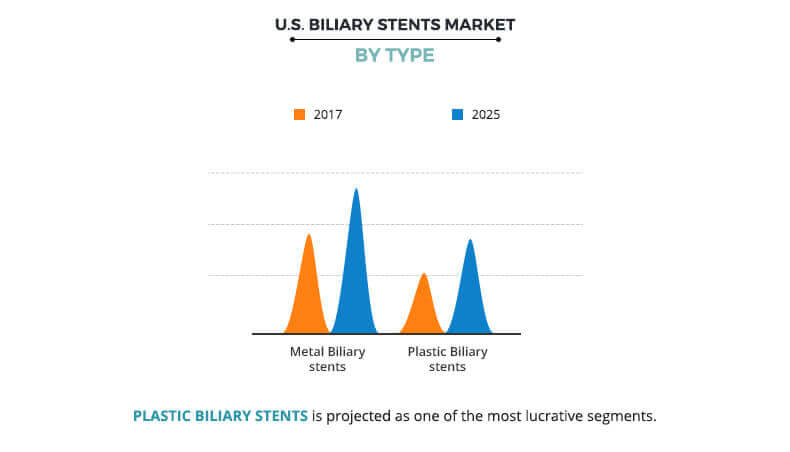 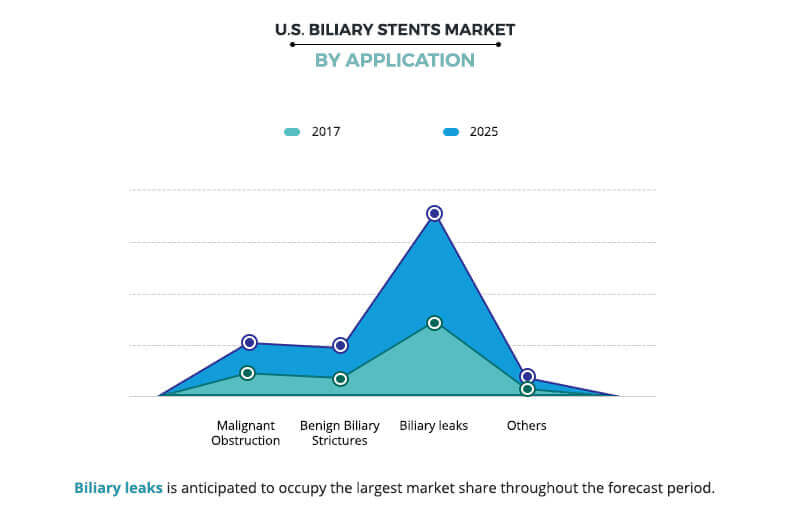 The U.S. biliary stents market opportunity is analyzed by the type vertical graph in the report. By type, the metal biliary stents segment occupied the largest share in 2017, and this trend is expected to continue throughout the forecast period owing to the wide application of specialized metal stents such as self-expandable metal stents (SEMs) in treatment of biliary comorbidities. In addition, metal stents with larger diameters have desirable features such as an increased patency duration, which make them one of the most sought-after choices for stenting.

The U.S. biliary stents market share is also analyzed through application. By application, the biliary leaks segment occupied the largest share in 2017. Biliary leaks are one of the most common modalities that are treated using stents. A small hole along the bile ducts can cause bile to leak into the abdominal cavity. A bile duct leak can form either a complication of a surgery, such as liver transplant, or through gallbladder removal, or from trauma to the biliary system. 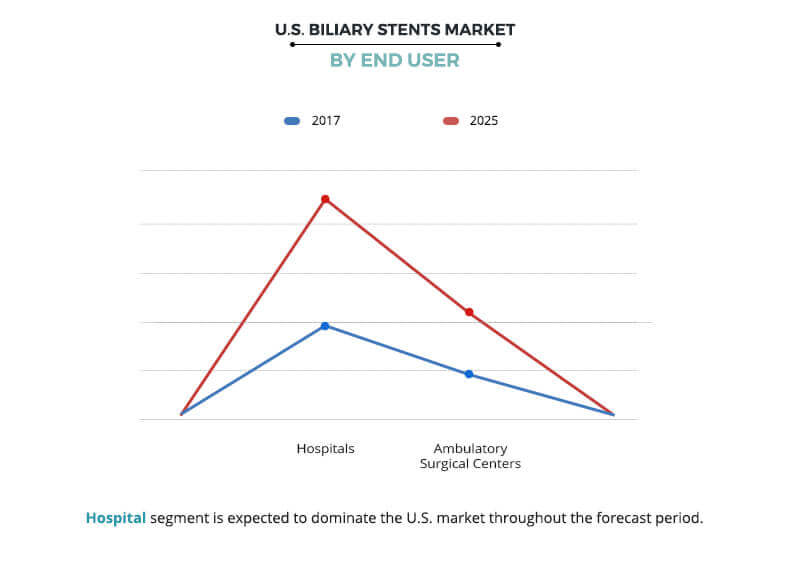 Furthermore, the U.S. biliary stents market trends are also analyzed through end users. By end user, the hospital segment is anticipated to occupy the largest share in 2025. The hospital segment generates maximum revenue from the surgical procedures, and is estimated to continue its dominance during the forecast period. Furthermore, the availability of trained medical staff in hospitals helps provide better services to the patient, which further contributes toward the growth of the market.

The growing competition and continuous technological advancements have led to agreements by major players in the biliary stents market. For instance, in May 2018, Olympus Corporation signed an exclusive deal to distribute M.I. Techs Hanarostent self-expanding metal stents. The deal includes both the FDA 510(k) cleared Hanarostent biliary and Hanarostent esophagus stents,

There have also been considerable product developments in the industry. For instance, in March 2016, Boston Scientific launched the AXIOS Stent and Delivery System. It is an endoscopic system indicated for the minimally invasive treatment of complications from pancreatitis. These devices were developed by Xlumena, which was acquired by Boston Scientific Corporation in 2015.

The utilization of biliary stents is expected to witness a significant rise with increase in its application in treating biliary disorders. Metal biliary stent is the most popular and preferred form of stents for treatment of biliary diseases. These stents are self-expandable (SEMS) that can expand to full diameter once it is placed in the body. The diameter at full SEMS expansion is 6–10 mm, the duration of patency is much longer, approximately 10 months that contributes to the market growth of metallic biliary stents.

Rise in incidence of pancreatic cancers and other biliary diseases across the U.S. is expected to propel the growth of the biliary stents market. In addition, technological advancements associated with biliary stents and surge in demand for minimally invasive procedures further boost the market growth. Further, the rise in preferences toward minimally invasive surgical procedures has been one of the most revolutionary developments in the modern medicine. Minimally invasive procedures are now widely practiced as a preferred treatment option for several disease conditions. However, high cost associated with biliary stents is expected to hamper the market growth in the near future.