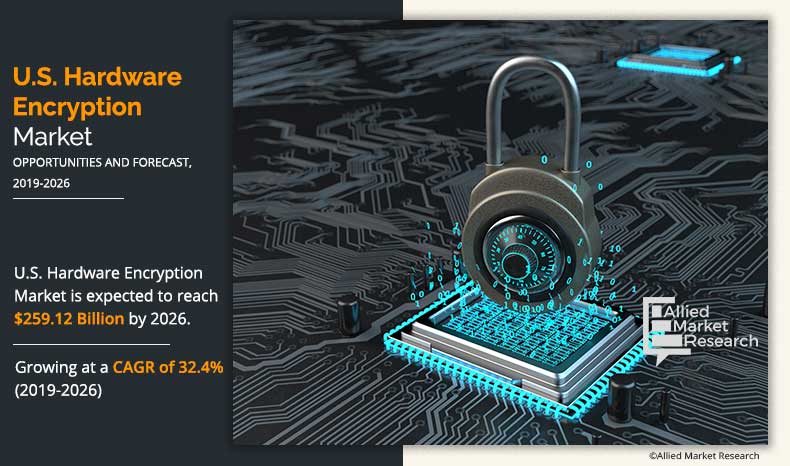 Hardware encryption involves encoding of data or information into a form, which is accessible to only authorized users. Encoding of the hardware requires an encrypting algorithm that generates cipher text, which can be read only after decryption. Decoding this private data needs an authorized user to type in a key or a password. In hardware-based encryption process, both the encryption and decryption are carried out by individual processors. Encryption and decryption processes play an important role in preventing unauthorized access to sensitive or private data, hence the hardware encryption market is expected to grow at a high rate in the coming years. Hardware encryption helps the user to protect confidential data during transmission and storage. With the advancements in technology, leading U.S. hardware encryption market players are developing various hardware-encrypted solutions to cater to the increase in demand in the storage industry.

RSA is projected as one of the most lucrative segments.

High penetration of internet in the U.S., as well as continuous growth of online businesses in the country drive the market growth. There is an increase in the use of RSA Algorithm to secure the communication between e-commerce sites and web browsers as these online businesses deal with a lot of sensitive data of their customers. Furthermore, rise in adoption of AES algorithm in number of industries such as over-the-top (OTT) & entertainment businesses, educational institutions & eLearning businesses, corporate & government, and others provides numerous opportunities for the U.S. hardware encryption market. In order to avoid content piracy and unauthorized data leaks among several industries, the adoption of hardware encryption technology is expected to rise at a significant rate.

ASIC is projected as one of the most lucrative segments.

HDD is projected as one of the most significant segments.

The U.S. hardware encryption market is segmented into algorithm & standard, architecture, product, application, and end use. Depending on algorithm and standard, the market is categorized into Rivest, Shamir, and Adelman (RSA), Advanced Encryption Standard (AES), and others. On the basis of architecture, it is classified into Application-Specific Integrated Circuit (ASIC) and Field-Programmable Gate Array (FPGA). The product segment includes Hard Disk Drive (HDD), Solid State Drives (SSD), Universal Serial Bus (USB), and incline network encryptor. By application, the U.S. hardware encryption market is categorized into consumer electronics, IT & telecom, automotive & transportation, aerospace & defense, healthcare, and others. The end use segment is classified into industrial, commercial, residential, and government.

Consumer Electronics is projected as one of the most significant segments.

Commercial is projected as one of the most significant segments.

The growth of the U.S. hardware encryption market is impacted by a number of factors such as increase in regulatory compliances regarding protection of private & sensitive data, declining prices of hardware encryption devices, growth of the consumer electronics such as smartphones & tablets, and rise in complexity & volume of data breaches and brute force attacks. In addition, widespread adoption of Internet of Things (IoT) technology & cloud services and ongoing technological advancement in encryption chip positively influence the market growth.

Growth of the consumer electronics such as smartphones and tablets

Increase in number of data breaches and brute force attacks owing to rise in digitalization is one of the driving factors of hardware encryption. Brute force attacks are increasing at a rapid pace; therefore, resulting in a strong need for encrypted devices. Most of the companies have started manufacturing encrypted keys/chips with algorithm of 128-bit symmetric key, 256-bit keys that has more security. Manufacturers are expected to come up with higher algorithm bit keys and generate a higher demand for the same in applications such as healthcare, BFSI, military & aerospace, and others.

According to the insights of CXOs of leading companies, the adoption of hardware encryption has increased for protecting sensitive data on portable devices such as USB flash drives, laptops, and others. Numerous benefits provided by hardware encryption technology such as consistent performance, ease of use, and robust protection against less and common sophisticated attacks offsets its cost higher than the software-based encryption. For instance, any brute-force attacks by hackers to gain access to hardware encrypted chips can be easily thwarted with the help of this.

Furthermore, Advanced Encryption Standard (AES) which is a specification standard by the National Institute of Standards and Technology (NIST) is gaining importance for data security in both the hardware and software encryption methods. The cryptographic module is rapidly gaining adoption among number of industries such as healthcare, government, military, and financial organizations in the U.S. Moreover, advanced encryption standard has become popular algorithm adopted in symmetric key cryptography by number of governmental agencies in the U.S. The use of AES in longer cryptographic keys offers easy implementation and can be used in restricted environments such as smart cards.

The U.S. hardware encryption market is consolidated and competitive, owing to the presence of well-diversified regional and international vendors. Prominent strategies such as product launch, acquisition and others are adopted by leading companies in an effort to expand their product offerings. The prominent players such as, Seagate Technology LLC, Toshiba Corporation, IBM, and few others are analyzed in the report in an effort to gain an insight into their winning strategies

Q1. What is the market size of U.S. Hardware Encryption Market in 2026?

Q2. Who are the leading companies in the U.S. Hardware Encryption Market?

Q3. How can I get report sample of U.S. Hardware Encryption Market report?

A. To get latest version of U.S. hardware encryption market report

Q4. What are the applications of U.S. Hardware Encryption industry?

A. The consumer electronics segment of Application is expected to drive the market growth

Q6. How can I get company profiles on top ten players of U.S. Hardware Encryption Market?

A. On the basis of top growing big corporation we select top 10 players.

Q7. What are the strategies opted by the leading players in this market?

A. Product extensions, mergers and acquisitions, collaboration and geogrpahical expansion are some of the major strategies adopted by leading vendors

Q8. Which companies are investing more on R&D practices?

A. Majority of the companies operating in the market are investing on R&D practices

Q9. What are the key growth strategies of U.S. Hardware Encryption industry players?

A. Technological innovations, product extensions, partnership, mergers and acquisitions and geogrpahical expansion are some of the major growth strategies adopted by leading vendors