by Type (Indoor and Outdoor), and Application (Commercial and Household): Global Opportunity Analysis and Industry Forecast, 2018-2025

Get detailed COVID-19 impact analysis on the Window Sensors Market

Window sensors are vital components of any security system. These sensors are attached to a door or window, which if breached sends a signal to the main control panel, triggering an alarm. Various types of window sensors are available in the market that perform the same function. Most window systems come with a set number of sensors, and one can add more at an additional cost. Ideally, these sensors are placed on every window on the premises. The window sensors come in two pieces: one fits onto the window itself, while its counterpart is attached to the frame. Adhesive keeps the sensors in place, though sensors are secured directly into the frame. The two pieces of the sensor are positioned right next to each other, to cause their interaction in case of breaching that cuts down the electromagnet contact between them. When the two pieces are separated, such as when the door or window is opened, they send a signal to the alarm panel. These window sensors are either wired directly into the alarm system, or they have a battery to power them, so they can function wirelessly. 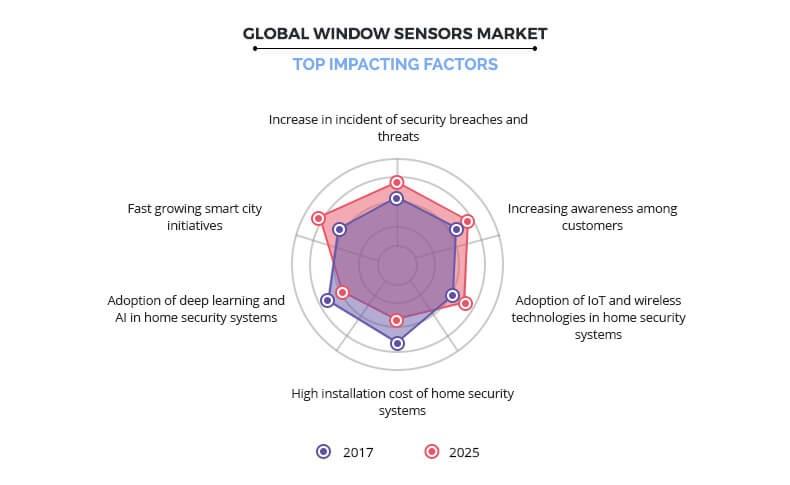 Increase in incident of security breaches and threats

A window sensor is an important part of the home security system that provides protection from intruders, burglars, and others. Thus, these windows sensors are installed on the potential entry points of the house, so that if any door or window is opened while the security system is armed, the sensor will send a signal to the central panel, which in turn will trigger an alarm. Installation of home security gives a sense of security to the people. In addition, the need of security is on the rise due to the increase in security breaches and threats. For instance, according to the crime statistics report by FBI, around 1,579,527 houses were burgled in the U.S. with a loss of around $3.5 billion in property. The installation of a home security system makes it difficult for a burglar to break in, which in turn reduce the chance of burglary. Thus, increase in incidents of security breaches and threats boosts the adoption of home security systems, which in turn fuel the growth of the window sensors market. 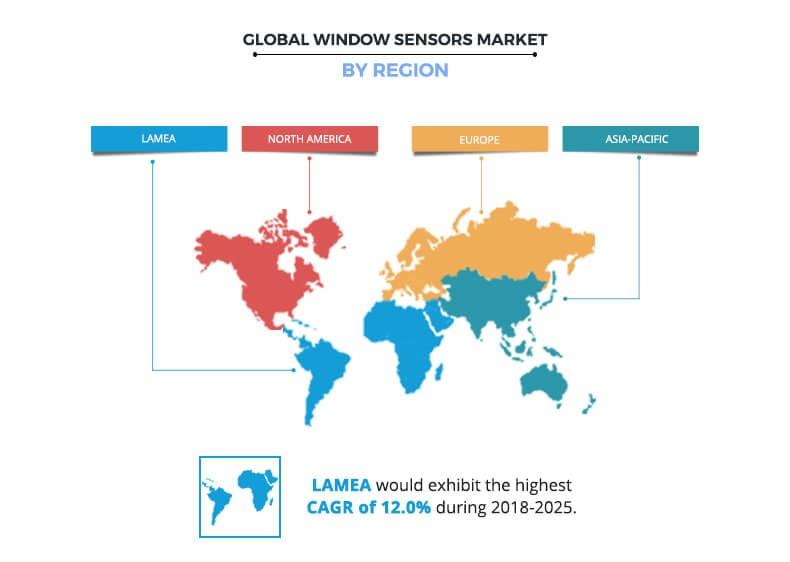 Increase in awareness among customers

Adoption of deep learning and AI in home security systems

Window sensors are a crucial component in the home security systems that promptly notify the owner if someone forcefully tries to enter the house through the door or window. A magnet and switch are attached to the window frame, and as long as the window is closed, the magnets keep the switch circuit intact. When the window is opened while the system is armed, the magnet is pulled away and the circuit breaks, which triggers the alarms. There are various types of window sensors such as wireless and wired; however, majority of the consumers opt for the wireless sensors to avoid mess of cords.

Among the analyzed regions, currently, North America is the highest revenue contributor, and is expected to maintain the lead during the forecast period, followed by Europe, Asia-Pacific, and LAMEA.